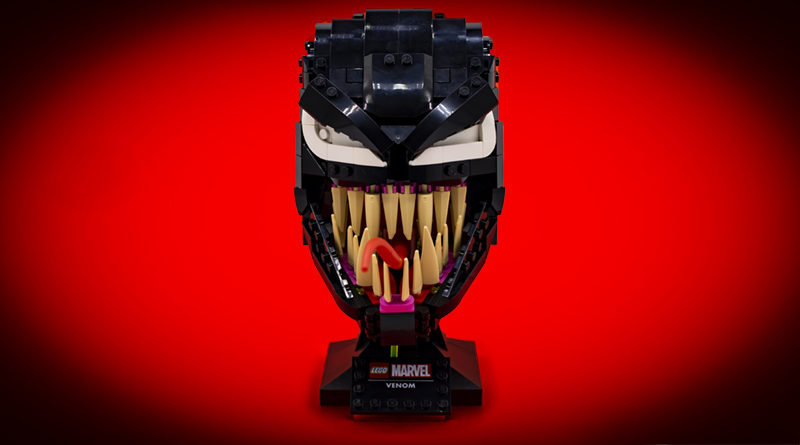 The subtheme of stylish and desirable busts aimed at adults that began last year with the likes of 76165 Iron Man Helmet and 75277 Boba Fett Helmet continues to grow and expand with LEGO Marvel 76187 Venom, a brick-built recreation of the iconic black and white symbiotic alien. As LEGO sets go, this is a definitely a model that will grow on you… you have been warned!

Making his full comic book debut in 1988, Venom has gone on to become one of Spider-Man’s most infamous foes and a real favourite within the Marvel fandom. The sinister symbiote has appeared in comic books, TV series and feature films.

Most recently played by Tom Hardy, Venom will be appearing once again on the silver screen in the upcoming sequel Venom: Let There Be Carnage. To mark the movie’s release the LEGO Group has released two new busts of the titular characters in 76199 Carnage and the subject of this review, 76187 Venom.

Unlike the sets that precede it, Venom’s bust isn’t a helmet, but rather the head of a living, natural being – well, as natural as a symbiotic alien can be. As a result, recreating the organic shapes and curves posed a challenge to the designers, but through clever parts usage and design tricks – such as asymmetrical eyes – they’ve managed to pull off a realistic and utterly terrifying bust of one of Marvel’s most menacing villains.

76187 Venom adds to the growing range of 18+ sets aimed predominantly at adults. That means we can expect a sleek black box and a sleek black manual, but thankfully minus black pages, which is especially welcome considering this model is made up of predominantly black pieces. The thought of that is only slightly more nightmare-inducing than Venom himself.

The build begins by constructing a stand using various slopes and corner slopes to create a slick yet simple base, complete with printed ‘Venom’ tile, which further enhances the display appeal of the set. The bust’s main frame and inner core are connected to and subsequently built up from this base.

To add more stability to the model, two Technic lift arms run through the centre of the base. In similar fashion to the previous busts, the inner core is built up using a variety of bricks with studs on the side. It’s reminiscent of the techniques used in the BrickHeadz theme, but here it just feels a little more grown up and sophisticated.

In more than a few of the stages the bricks are connected by a single stud, or are left quite loose until further down the line, so it’s worth taking care and time during these early steps. It’s also worth giving your hands a good wash beforehand, too – there are a lot of black pieces, which pick up on grubby fingerprints more than any other colour of LEGO brick.

The first part of the build is fun, if not fairly standard. The next stages, however, feel a lot more involved, with a nice variety of both pieces used and techniques employed. Pink 1×2 plates with clips, lime 1×2 jumper plates, white 1x2x3 arches, white 2×2 macaroni tiles and tan weapon spikes and barbed claws (currently exclusive to this set in that colour) are all put to good use creating interesting details and shapes.

The jumper plates are incredibly useful in a build like this, helping to create staggered layers that are slightly offset from one another. It’s a great technique to help slowly build up the curved shapes of the top and back of the head and face.

With each progressing stage the build continues to impress and gets increasingly enjoyable. The forehead is a wonderful little sub-assembly that’s very pleasing to put together and attaches via two 2×3 modified plates with bars. A variety of curved pieces help create the right angles for the head as well as being put to good use for both eyebrows. It’s fun to construct and looks very effective once attached.

The eyes themselves are also separate sub-assemblies, constructed using black and white plates and wedge plates that create two distinctive, angled eyes. As mentioned earlier they are asymmetrical and do look excellent when placed on the model, really helping to bring Venom to life.

As good as some of the details of the face are, the mouth is not only the most enjoyable aspect to construct, but also forms the main focal point of the set. It’s a vicious, mangled, nasty mesh of sharp, pointy teeth, recreated here with the aforementioned tan weapon spikes and barbed claws. These are staggered from front to back, creating an incredibly menacing look that’s both accurate and authentic to the character.

The construction of the bottom row of teeth is another excellent stage, requiring two sub-assemblies featuring even more teeth on either side. As another level of accuracy these are connected to pink and red pieces, creating the impression of the inner gums, which are quite a prevalent feature of the comic character.

The sub-assemblies are connected through a ball and hinge joint to the lower jaws, and once attached are perfectly evocative of the source material. Finally, a brick-built, snake-like tongue completes the horrific yet brilliant model.

There have so far been seven different variants of Venom in minifigure form, but none make an appearance in this set. It was to be expected as there weren’t any minifigures included within any of the other LEGO busts released so far.

However, as a representation of the character of Venom, the bust is a fantastic recreation displaying a high level of authenticity and accuracy to the source material.

76187 Venom retails for the same price as the other LEGO busts that have come before, and it feels like a pretty fair cost to bear. The build is very enjoyable, which is essentially an added bonus, because 76187 Venom is a display piece first and foremost. And in that area, it really shines – especially when compared to other similar products on the market. (One high-quality PVC Venom bust retails for over £1,000!)

LEGO Marvel 76187 Venom is a set that starts off pleasantly enough, gets better as the build progresses and then ends excellently. It’s the way a building experience should be – something that steadily becomes more enjoyable and leaves you wanting more.

As a finished display piece it’s quite unlike anything the LEGO Group has produced before. It’s a genuinely disturbing and frightening thing to look at, but in a good way as it absolutely captures the evil, psychotic menace of the character perfectly. Recommended ages are usually based on the level of difficulty offered by the build, but based on how scary the finished model actually looks in this instance the 18+ age recommendation feels very appropriate.

LEGO superhero busts have so far been a little hit and miss, not quite delivering on the overall look of the finished product, but this is a model that does not disappoint. 76187 is a really enjoyable build that constructs into a brilliant display piece.

How long does it take to build LEGO Marvel 76187 Venom?

LEGO Marvel 76187 Venom contains six bags of parts and will take roughly two hours to complete. Experienced builders will probably complete the build quicker, but regardless of the length of time, it’s an enjoyable experience from start to finish.

How many pieces are in LEGO Marvel 76187 Venom?

There are 565 pieces in LEGO Marvel 76187 Venom, and – perhaps unsurprisingly – they’re mostly black.