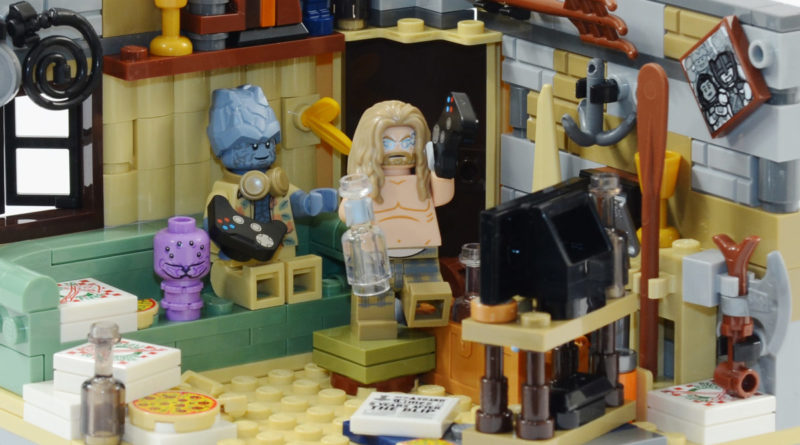 So, let’s check out all of those details and see if it’s worthy of a place on your shelf. As an automatic positive, its regular retail release and 7+ age mark means we avoid the black void of the LEGO Group’s 18+ packaging. Phew.

A small set at just 265 pieces, many of them tiny, 76200 Bro Thor’s New Asgard progresses quickly from base to finish. No revolutionary techniques are employed here, but much like the film scene, all of the details have been thoughtfully curated to create a look that’s messy, but not overwhelming to the eye.

Somewhat unusually for a LEGO set, the instructions have you place a number of things at odd angles off of single studs, including a pizza box, newspaper, a picture from Thor’s more victorious past, and the TV set.

Most details can be traced directly to the relevant scene in Avengers: Endgame, though of course they have been pared down since this set is just one small slice of the multi-room house in the movie. The sheer quantity of different minifigure accessories stands out against any LEGO set, including as many or more as you’d often find in the largest minifigure-compatible sets.

We adult fans commonly complain about stickers, but the graphic design work in 76200 is of an exceptional quality. There’s the Welcome to New Asgard sign that closely matches the movie (albeit at a reduced size); the newspaper that reads ‘5 Years After the Blip’; that Thor picture; three Stormbreaker Pizza boxes; and finally the TV screen that mimics Fortnite but features classic LEGO trees, what looks like a LEGO Korg wielding both Thor’s hammer and Stormbreaker, and even references ‘noobmaster’, who Thor and Korg talk to in the scene.

All of these stickers are square or rectangular, and thus pretty easy to apply. Plus, bearing in mind some of the LEGO Group’s print quality lately, it’s probably a blessing that these are stickers.

Speaking of Stormbreaker, that’s also included in the set with the same build as its other appearances, such as in 76193 The Guardians’ Ship and 76192 Avengers: Endgame Final Battle. Its position in the corner makes it hard for Thor to carelessly pop caps off bottles with it like he does in the movie, but you can create your own scenes with it.

Like bigger sets with furniture such as 21328 Seinfeld and 21319 Central Perk, 76200 Bro Thor’s New Asgard features an easily-removable couch, which reveals a final hidden detail: a misplaced cookie underneath. The nearby keg is filled with what we’re sure is lemonade. Yes, definitely lemonade…

The set doesn’t look like much from the outside, and we’d have to wonder why anyone would display it this way when all the details are on the inside. That said, the messy mix of materials isn’t actually out of place for the buildings in New Asgard.

Finally, we don’t often note the spares, but here they’re worth highlighting: more pizza and headphones, among others.

The character line-up of Bro Thor, relaxed Korg and armour-less Miek fits perfectly for the scene at Thor’s place, right before Rocket Raccoon and Hulk bust in. Each minifigure matches its on-screen appearance fairly well: Thor shirtless in his comfy pants with gloves on, and Korg in an open Hawaiian shirt. Korg even gets a brand new piece to extend his rocky head.

Of course, there are minor nitpicks to be had. Korg should technically have dual-moulded legs since he’s wearing shorts in the scene – an oversight that feels more egregious than just, say, Batman missing boots – and Thor’s overhanging belly has a touch too little opacity (it actually looks better in these pictures than in real life). One could even argue that Korg shouldn’t be a minifigure at all, since in the movie he stands as big and tall as Hulk.

Finally, Miek’s body, which is composed of two flower pieces, looks like a bit of a weak attempt – but the only other solution would be a new moulded piece, which can hardly be expected when the set already includes a new piece for another minor character.

All in all, though, it’s a fantastic little group of appropriate characters that we’re pleased to be getting in LEGO form. Korg is more versatile for customs than if he was a bigfig, and so the only thing truly bringing these down a bit is the LEGO Group’s persistent problem of matching its light nougat or ‘light flesh’ colour in printing.

The price here feels just a smidge expensive, not only because of the piece count for £27.99 / $29.99 / €29.99, but also in that so many of those pieces are tiny, which results in a model with a rather small footprint.

Still, for the exclusive minifigures that include a new piece, the sheer quantity of accessories and the overall stellar design including graphic design, the price doesn’t strike us as unreasonable.

Like we’ve said, 76200 Bro Thor’s New Asgard is a weird one. It’s got more accessories than you’d find in a typical $100+ set, three off-beat character designs, and next to no classic ‘playability’. It’s clearly intended as a display piece, pure and simple, and massive props must be given to the LEGO Marvel team for making it and releasing it to us.

It could feel a tad small for your money, but for all that’s included and the chuckle you’ll get every time you see it on your shelf, desk or wherever you display LEGO, it’s worth it.

A weird one, but a good one.

How long does it take to build LEGO Marvel 76200 Bro Thor’s New Asgard?

It takes just around half an hour to build 76200 Bro Thor’s New Asgard, but get your fingers primed for stickering and carefully placing small pieces.

How many pieces are in LEGO Marvel 76200 Bro Thor’s New Asgard?

There are 265 pieces in 76200 Bro Thor’s New Asgard, including numerous fun minifigure accessories, masonry bricks, and a little injection of sand green for the couch. Plus, two and a half minifigures with designs that can only be found in this set, and that are likely to stay that way.

The complete scene measures a modest 8cm tall, 12cm wide and 12cm deep, with the upshot being that it’ll be pretty easy to find room for it in any display, or on its own.

How much does LEGO Marvel 76200 Bro Thor’s New Asgard cost?