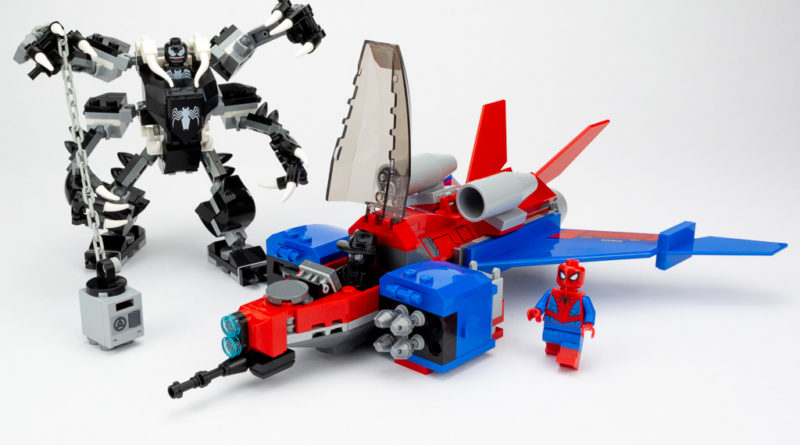 The LEGO Group has introduced a new-to-2020 Marvel mech series, with individual mechs such as 76140 Iron Man Mech (review). The LEGO Group did something a bit different with 76150 Spiderjet vs. Venom Mech.

Unlike 76140 Iron Man Mech, 76141 Thanos Mech and 76146 Spider-Man Mech, which are all individual £9 sets, the LEGO team decided the safest way to release a Venom mech was by bundling it with another unnecessary Spider-themed vehicle and tripling the price.

Let’s take a look at the minifigures first, three of which are included here. Often a big draw for sets, especially when it comes to licensed products featuring well-loved television and film characters, the LEGO Group is all too aware of this and uses it to their advantage once again.

Spider-Man and Venom are the same versions as those available last year, so great for fans who don’t already have them, but a bit of a shame for those that do. Spidey does get dual-moulded legs which should be a staple on all versions of the web-slinging hero, but for some reason isn’t always the case.

The main appeal for collectors is of course the exclusive, and very cool, Spider-Man Noir. After the success of the animated movie Spider-Man: Into The Spider-Verse, it’s nice to see some of the less familiar characters making their debuts in official LEGO sets. Although the printing itself isn’t the most intricate ever seen on a minifigure, it resembles the character well – all black with subtle grey and silver accents – and is no doubt a big influencing factor for those on the fence about buying this set. I’d like to have seen a cloth-made trench coat on it, but I’m nit-picking here.

As the set’s marketing title suggests, it consists of two main components: The Venom mech and the Spiderjet.

Last year, the LEGO Group released 76115 Spider Mech vs Venom, which featured an instantly more impressive symbiote structure. It wasn’t described as a mech, so it technically shouldn’t be compared like-for-like, but one can’t help feel that the 2020 version here is a bit of a second-rate rehash, albeit designed for a smaller budget.

If you’ve built any of the aforementioned hero mechs from this year, then Venom isn’t too different other than colour scheme and a few minor changes, one of the most obvious being double the amount of arms. I don’t hate this model by any means, but it does still have a few design flaws.

The same issue I had with the Iron Man mech affects this too and that’s the use of a black Plate, Modified 2 x 2 with Wheel Holder for all four hands, leaving a protruding pin that just looks odd. I also found that the little claws seem to fall off with only the lightest of touches. I may not be a child with small hands anymore, but I have careful fingers when it comes to LEGO and yet I still kept knocking them off every time I picked the thing up. This became a little frustrating after trying to pose Venom for some articulation shots.

Generally it looks good from all angles although I would have preferred another set of inverted black slopes on the back as the grey square stands out a little, but it’s not a catastrophe by any means. The way the dual-hinged chest-piece comes down to place the minifigure inside is quite satisfying and the printed spider on the chest shield is a big plus for LEGO fans too.

I haven’t yet mentioned the safe that is included in the set, presumably as a story/play incentive which can be gripped by Venom’s claw fingers via the hook on the end of the chain. We also get a printed ‘100’ tile and two pearl gold ingots to go inside this, adding to whatever bank heist story one comes up with. It’s almost a shame that this set wasn’t a bit more expensive and included a bank building to go with it.

Lastly we come to the Spiderjet. We might not have asked for a Spiderjet, but it’s hard to deny how much it opens up play options for children, especially those who might not have any other LEGO bricks and get this as a first set.

Ignoring the ergonomic science behind aircraft, this jet is fairy sleek except for one thing – the hard-to-miss flick-missile blocks seemingly just plonked on the side of the cockpit.

One side fires 2×2 round tiles and the other warhead-tipped flick-missiles. They both work well in concept, but fire everything at once, making it a bit of a pain to reload after just one shot.

If it wasn’t for those, the remaining silhouette of the jet would be quite cool. It’s not exactly stealthy with the bright red and blue colour palette to match Spider-Man’s suit, but that’s unlikely to bother a child. In fact, from their point of view, it’s extremely swooshable and the capability to fire missiles at the evil Venom mech is always fun.

The overall build was simple, but it’s a sturdy model and does feel nice to hold. The only part that I wouldn’t miss is the gun turret at the nose, which is very easy to knock off.

There are a few stickers dotted around, thankfully kept to a minimum, though I don’t think the model would suffer too much should you choose to leave them off entirely.

76150 Spiderjet vs. Venom Mech is a slightly underwhelming set from the 2020 range, especially with the release of another similar (but far superior) Venom build only last year. It’s a set that will likely appeal greatly to kids nonetheless and still a great way to pick up a Venom and Spider-Man if you’re new to collecting LEGO Super Heroes.

For most AFOLS this set is all about the exclusive Spider-Man Noir, but the character is probably best acquired from the secondary market to save some money for some of the much better sets currently available.

76150 Spiderjet vs. Venom Mech is available now at LEGO.com. You can help support Brick Fanatics’ work by using our affiliate links.