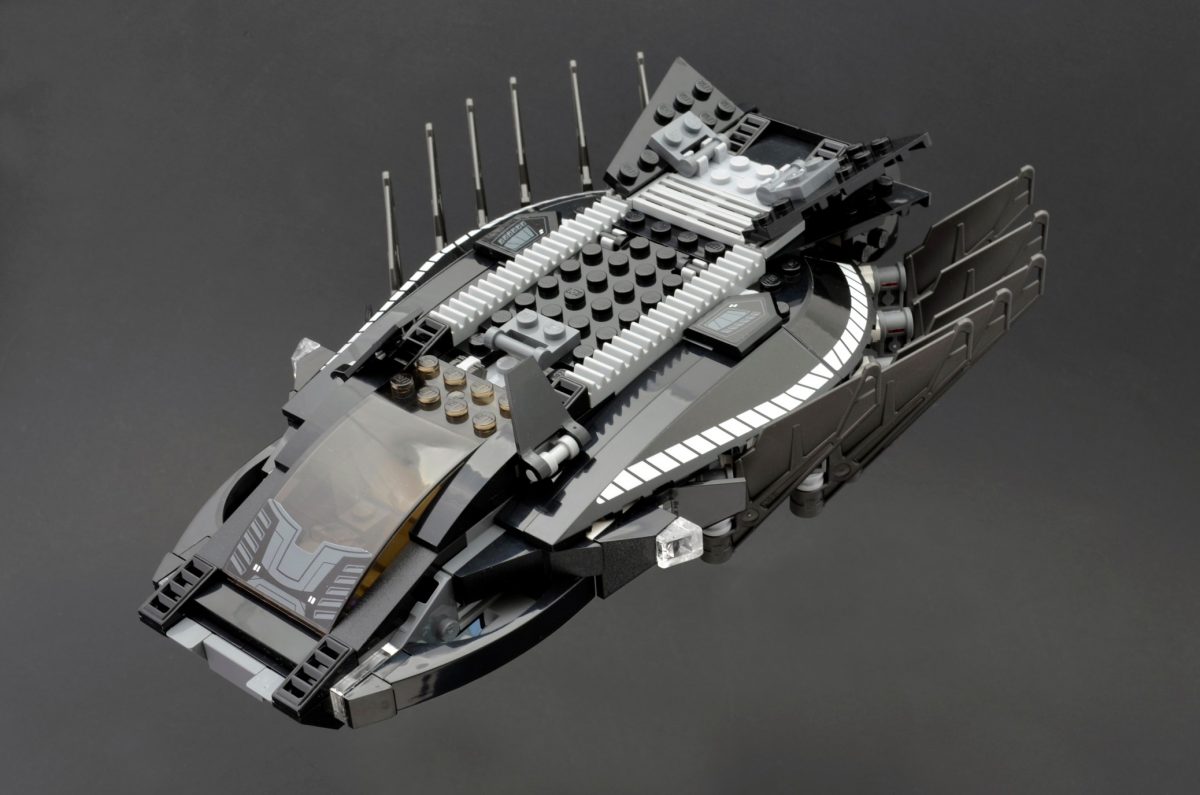 Marvel Studios’ latest release, Black Panther, is proving a smash hit in cinemas – but does 76100 Royal Talon Fighter do the movie justice?

Black Panther hit cinemas this past week with much fanfare, not least due to a super hero movie finally being released that has a predominantly black cast. Audience and critical reception to the film has been overwhelmingly positive, and for good reason. The benefit to this review coming after this film’s release is that we can take a look at how the larger of the two Black Panther LEGO sets compares to its cinematic inspiration.

76100 Royal Talon Fighter actually occupies a considerable amount of screen time in the film. Given the rather unconventional shape of the ship, the LEGO Group has done a highly commendable job of capturing its overall shape and style. It’s a good thing, as there is no ancillary build in this set to help carry it.

For the most part, the build is interesting. There is some nice SNOT going on, and it manages to avoid being too obtuse for casual builders. There’s a roomy cockpit, and a rather large storage area in the middle of the ship. The only time the build gets a bit stale is when it comes time to attach the fins around the back. Each is constructed the same way, and there are a dozen of them. On the plus side, the end result looks great, and the Technic construction of the fins keeps them firmly in place. 76100 Royal Talon Fighter is supremely swooshable, and has the benefit of not being too big, meaning it’ll be easy for kids to play with.

Filling out the remainder of the set is a fine collection of minifigures. There are a lot of characters in Black Panther, four of which are presented here. Between the two sets released in this wave, one major character – T’Challa’s sister Shuri – is missing. Hopefully this will be rectified in some new sets down the line. Of the characters presented in this set, two are the same as in 76099 Rhino Face-Off by the Mine, though they are different versions. The T’Challa here wears the Black Panther suit seen earlier in the film. The Eric Killmonger is likewise from earlier in the film. He wears a mask from a specific scene, which is reproduced very nicely in LEGO form. It’s great to see a new mould for something like this.

This brings us to another pairing of good and evil, Nakia and Ulysses Klaue. Klaue is a South African arms dealer who pairs up with Killmonger. Here, his tattoos and unique choice of beard are both present. The weapon he carries is wildly inaccurate to the film, but it does its job well enough. Nakia is a Wakandan spy, and fierce combatant. She comes with a pair of circular bladed weapons, which are a cool new part and will undoubtedly be making their way into many a MOC to come. She also sports a new hair piece that bridges the gap between the short afro found on characters like Star Wars’ Finn, and the larger disco afro piece from the collectible minifigures. It’s incredibly encouraging to see more african hairstyles make their way into the LEGO parts lexicon, as it affords a much greater variety of characters and personalities.

In terms of the printing on the minifigures, what is here is excellent. Each character is intricately detailed, save perhaps for the simpler vest and shirt combo for Klaue. Sadly though, the legs for most of the characters – and this applies to 76099 too – are not printed. This is a shame, as the costuming in the film is top notch, and it would have been great to see those design elements carried through to the minifigures. While I don’t know for certain, some of the design choices both for the minifigures and builds for this movie feel as though the designers were working from early production art, and perhaps didn’t have access to what would be the final look.

Slight inaccuracies aside, 76100 Royal Talon Fighter is a great set at a fairly reasonable price point. It’s a solid build that’s fun to play with, and comes with a diverse cast of minifigures that are desirable both intact, and as parts for the character bucket.

76100 Royal Talon Fighter is available now at shop.LEGO.com. You can help support Brick Fanatics’ work by using our affiliate linkes.