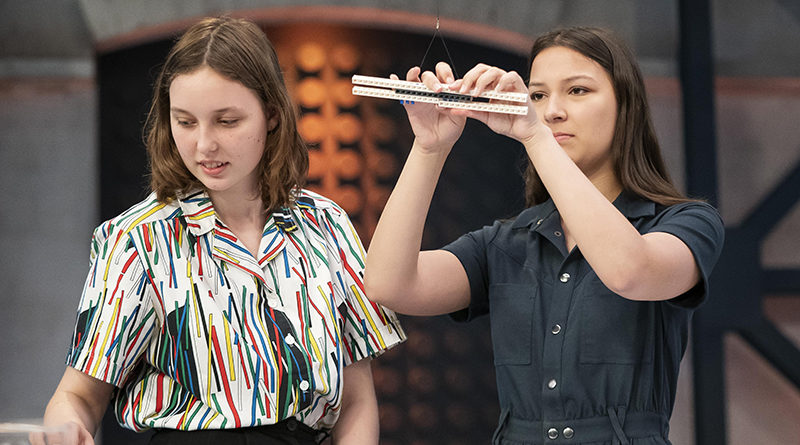 Of all of the episodes of English language LEGO MASTERS episodes that have aired around the world, this might well be the best yet. Two challenges that work exceptionally well for television and some ridiculously impressive builds make it a tense, entertaining 90 minutes of television.

In the first challenge, which buys the winning team an extra hour in the main elimination challenge, the teams must build the tallest tower possible. Despite it being a LEGO convention staple, that it plenty of tension as host Hamish Blake wanders around hamming it up and making it even tougher for the builders to keep their hands steady.  It feels a little naughty to deny the contestants stools when some are taller than others, but ultimately it is a close run thing as two teams manage to exceed four metre high towers.

While it is great fun seeing the first challenge take place, the hanging brick challenge is even better. It is an absolutely great concept – a single LEGO Technic element is hanging from the ceiling, and the entire build must be constructed around that piece. An ingenious concept.

Knowing how tricky it is makes it all the sweeter when the teams rise to the challenge, all coming up with excellent concepts for something that is hanging. Trent and Josh are extremely ambitious to try and build a hanging bord cage, but it pays off as they deliver what is surely the best version of the concept that can be achieved in the 10 hours and deservedly win the challenge.

It is such a shame to see Tim and Dannii lose a fin from their fish right at the last moment, at is a visually striking build that shows some real LEGO sculpting skill. Jennifer and Jodie have a nice colour scheme for their dragon, but the shape is not quite organic enough and the cloud is fairly blocky.

Andrew and Damian come up with something great, although they probably should have doubled up their Technic frame. A pirate ship blimp is hard not to love though, especially on the scale they manage. Jay and Stani really produce something wonderful this time, executing a sci-fi microscale city protected by a biodome on an extra-terrestrial world.

After how good their last build was, Jackson and Alex deliver a dynamic scene but one that is not as polished as it could have been, with their spaceship perhaps a slightly tricky choice of subject matter.

While Summer and Iona leave at the end of the episode, it is bittersweet. Hopefully Summer was not too unwell and it is fully recovered. Iona displays incredible strength of character and real resilience to continue in the face of adversity. Ultimately, their previous builds suggest that they are not up to the standard of the other contestants and it is probably the right time for them to be eliminated.

Interesting and original challenges, exceptionally talented LEGO builders and some nice banter from Hamish and Ryan “Brickman” McNaught all make this a really compelling episode of the series. LEGO MASTERS Australia continues to be the most entertaining English language version of the format yet.