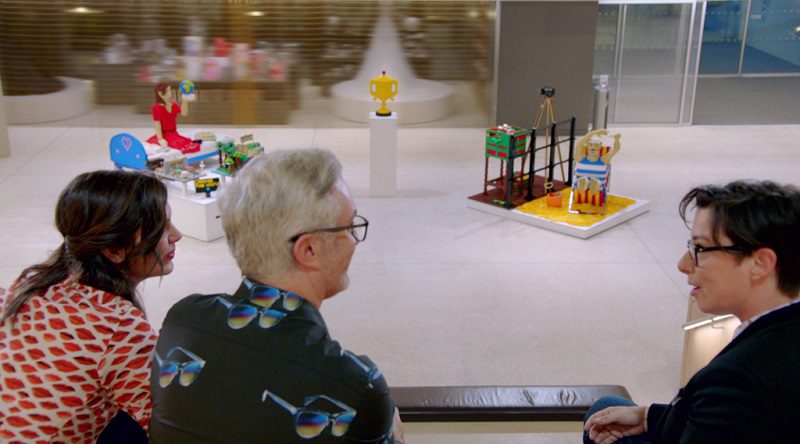 Did the LEGO MASTERS judges pick the right winner? Or did they get it wrong? The Brick Fanatics expert panel take a look at the grand final and debate whether the judges got it right or wrong

LEGO MASTERS Series 2 is over and a winner has been crowned. After the four remaining teams built a robo-pet using LEGO BOOST, two were knocked out leaving the final two pairs to go head-to-head and construct their Master Builds. Sue Perkins joined Matthew Ashton and Fran Scott to select the LEGO MASTERS 2018 champions, but did they get it right?

Spoilers are ahead – if you have not seen LEGO MASTERS Series 2 Episode 5, come back once you have.

The Brick Fanatics panel, who have assessed every decision during Series 2, have gathered together to give their verdict on whether the judges made the right decisions.

Once again, Paul & Lewis killed it with their lizard build. It looked cool, had interesting movement, and was interactive in a way that children really enjoy. Despite the abysmal jokes, Izzy & Stuart’s pig was visually well realised and felt complete. All through this episode in particular, it is clear that some of the teams have learned from past challenges and made adjustments accordingly. Unfortunately for Chris and Joseph, they just couldn’t seem to let go of their literal view of things. While I felt they had been unfairly chastised for that quality in earlier rounds, the judges’ assessments were quite justified this time. It would have been nice to see something a bit more fantastical from them.

This first challenge again calls into question some of the behind the scenes goings on in the show. All of the teams seemed to have little problem navigating the Boost software, and while it is not impossible for all of them to have sufficient prior experience, it seems unlikely. Were the teams coached beforehand on how to use it? I suppose in the end it does not matter, but it does seem like it would give certain teams a huge advantage if they were already fluent with the software.

The final two builds were both impressive. For me though, Paul and Lewis were again the clear winners. Their build held together as a whole. The scene worked all by itself – it was evocative and warm and looked great, but their working mutograph was both novel and extremely well executed. 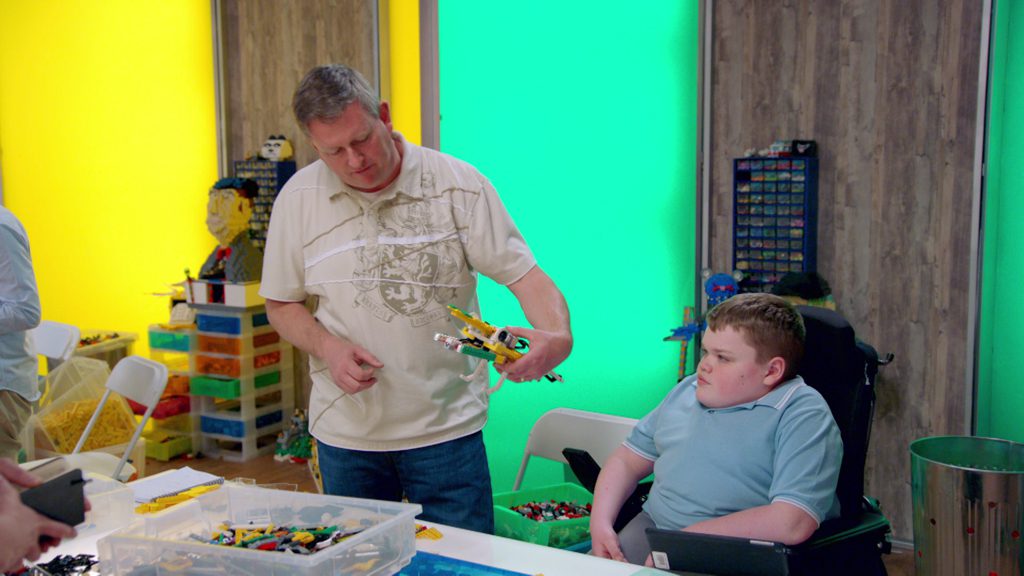 Izzy and Stuart’s model was impressive in terms of scale, but the two halves didn’t really add up to much of a whole for me. The spinning globe was a bit unimpressive as mechanisms go, and though the overall message was extremely positive, it also felt a bit heavy handed and under realised. It has to be said though that I absolutely loved the little concert scene, for which the motion was brilliantly handled.

I am very happy for Paul & Lewis. Of all the teams they showed the most growth and adaptation of all of the teams over the course of the competition. I felt their early efforts were pretty weak, and they were lucky to have made it to the end to have the chance to really show what they were capable of. All of the teams should be proud. Doing any of those challenges under such tight time constraints is a feat to be applauded.

It is understood that “reality” TV shows are not always as random as producers would have us believe. Up until this episode I felt that things had been allowed to proceed fairly organically, but during the finale I felt that the heavy hand of producing good TV was more visible.

Some of the seeds which came to fruition in this episode had been getting watered over the last couple episodes. Simply put,

It seems as if the judges did not want Chris and Joseph in the final face off for the trophy. Given a week, these two would almost certainly have been able to put together something fantastic; it needed to be a competition and the probability of that was lower if those two were present. So for weeks now, the judges have been feeding a narrative that Chris and Joseph were “too literal” and “not imaginative enough”.

Unfortunately for the judges, the brothers turned that on its head with their bunny. It was creative, took a page from the prompts the children gave them, and the only thing “literal” about it was that it was brown like some actual rabbits. Of all the models, it had the most functions, made the kids laugh and – as one who has built with BOOST – pretty much maxed out what that system could do given the amount of time they had to build. Put simply, within the context of the challenge, theirs was the best at utilising the robotic elements. 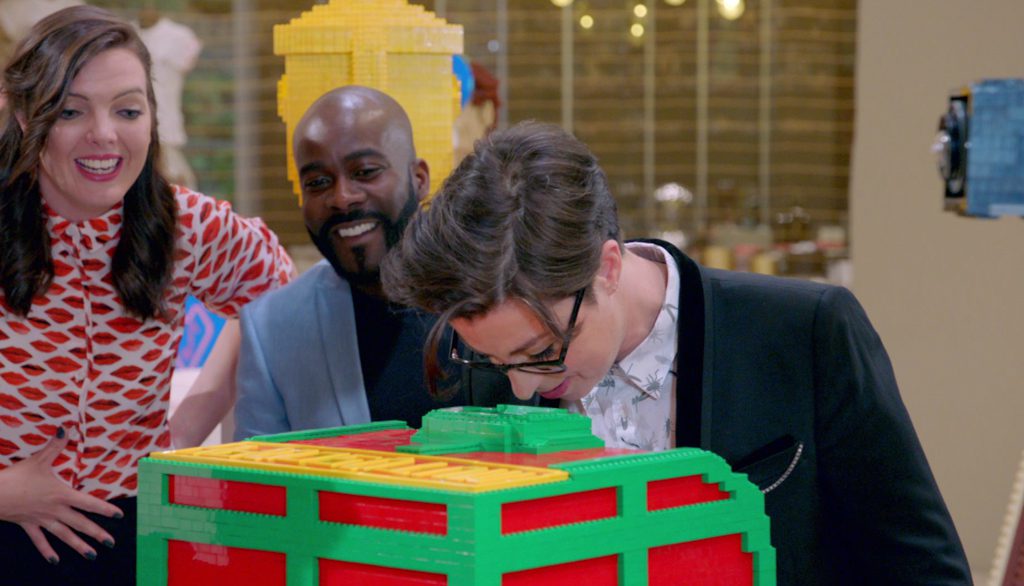 Even if you are not willing to go that far, it was certainly superior to the blocky, limited function pig built by Izzy and Stuart. It seemed as though the judges had decided that the most compelling final would be Stuart and Izzy vs. Paul and Lewis.

The final matchup was the most even and fair it could have been, both of those teams seemed equally likely to win at the start of their seven day builds. It was also interesting to see the completely different ways that they went with the prompt. Stuart and Izzy were going for more of an art installation route, while Paul and Lewis chose instead to try something never before done in LEGO bricks. While Stuart and Izzy’s may have looked more at home in the museum that the final judging took place in, the mechanics of Paul and Lewis’s build clearly made them my favourite to win. When it came time for the judging it was clear that the trio tasked with making the final call thought so as well. The motograph was clearly the deciding factor and was for me as well – a spinning globe just couldn’t compete with that.

Overall, I am pleased with how this season of LEGO Masters turned out. There were some truly interesting challenges that were a pleasure to watch. I appreciated the competition, but also clear comradery between the various teams. Paul and Lewis would not have been my first guess as to who would win, but the honour is well deserved as they consistently proved themselves and showed the most growth of any of the teams. I will be looking forward to Series 3 and hopefully, one day, a US version.

Without knowing what transpires behind the scenes, this series has felt a bit more streamlined than the last one with a series of carefully planned challenges to both entertain television audiences, while also ensuring the finalists had what it takes to deservedly win the title of LEGO Masters.

The core LEGO demographic ultimately always comes back to kids, so it was only fitting that the judges are assisted by a panel of children to not only brief the penultimate challenge, but then give feedback.

Based on previous challenges I was expecting great things from brothers Chris and Joseph. They are the very definition of AFOLs, but it felt like they were often getting an unfounded critique on their models not being fun or imaginative enough throughout the series. I didn’t always agree entirely with the judge’s opinions, but I did facepalm a little at their rabbit for not being a bit bolder with colour choice. Fair enough, rabbits are not usually lime green or purple, but this is where listening to what the kids asked for might have secured them an easy place in the final, because the interactivity and functionality was spot on.

It was the complete opposite for Stuart and Izzy, as I didn’t really think their functions were amazing, nor the groan-worthy Dad jokes (although kids do tend to enjoy a fart gag), but I did think the finished robo-pet design was much more friendly and fun. Should they have gone through? Maybe not, but given how obvious it seemed that Paul and Lewis should go through, the final was likely to be more balanced with either Stuart and Izzy or Kato and Jayden as ultimately this is a television show, not an AFOL contest. 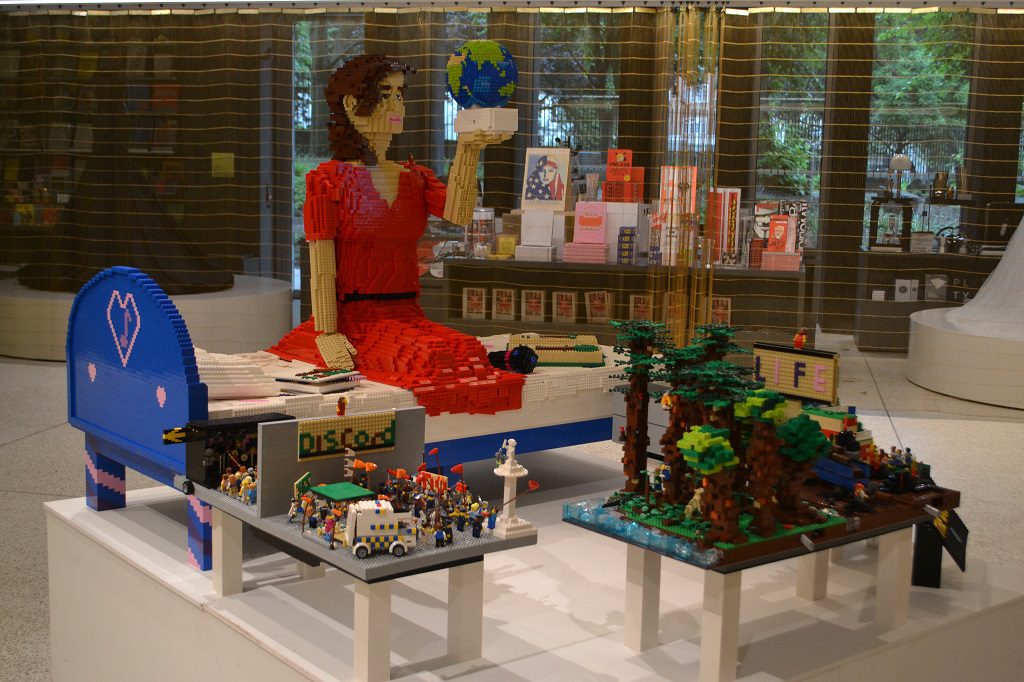 The final challenge would be an intimidating ask for anybody, but with half a million bricks and plenty of time at their disposal I was still hoping for great things. I didn’t know if either finalist could deliver. I must admit I was then genuinely quite surprised and delighted by the finished results. Both teams worked hard to create something spectacular from a distance, but with added functionality up close, incorporating all the skills from previous tasks.

Izzy and Stuart’s was quite culturally significant and executed with the right amount of detail, but unfortunately neither the spinning globe nor the log-cutting mechanism were hugely unique. The model did look good though and I think they were fairly consistently builders throughout, so it was certainly a close call.

Paul and Lewis brought a lot of warmth and humour, with a nostalgic touch for bygone days of English summer times at the beach. As a model alone it looked on a par with something you’d find at a LEGOLAND park, but with the added technical genius of the mutoscope, it was the clear winner for me.

Overall it was a very entertaining series and I hope they decide to bring back a third series whilst continuing to refine the format.