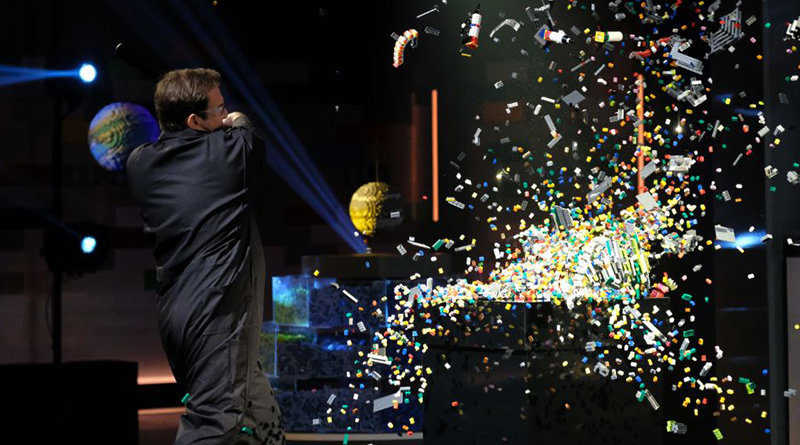 After establishing the series last week, LEGO MASTERS USA returned with a completely different type of built for the contestants to face. The Space Smash Challenge saw the 10 pairs of competing builders tasked with constructing a model that would break dramatically when attacked with a baseball bat, by explosives or with gravity, whilst also telling a satisfying story.

The Space Smash Challenge was an interesting choice for an elimination task. In the UK and Australian editions of the show, it was used as one of the fun, less competitive challenges. As this episode illustrated, it is really hard to judge builds based on both quality and smash-ability. That said, seeing LEGO models explode is fascinating – especially as it is something that few are likely to do at home.

Will Arnett continues to hold the show together, making the wise choice of not taking it all seriously and constantly reminding everyone that they were making a reality television show. The Big Bang Theory actor Mayim Bialik – who has of course appeared in a LEGO set herself – turned up in connection with the space theme. She proved a great comedic partner for the host to bounce off.

The UK version of LEGO MASTERS launched the series as a worldwide franchise. It saw children competing with adults, so the rough edges of reality television shows were avoided. It is a shame to see something as joyful as LEGO building cause conflict and in this challenge Sam was inexcusably rude to Jessica, leading to their build not being remotely cohesive.

Christian and Aaron built an incredible model this week and did not get enough credit for making something work in the way did with train track elements. Krystle and Amie look to have built something interesting, although it did not get enough screen time to be sure. Travis and Corey managed to construct a breakable build while incorporating some detail. Boone and Mark somehow made a cool build that also exploded well.

Tyler and Amy wisely knew to avoid typical LEGO building scale and to go for something big, something more like what is dotted around a LEGOLAND theme park. The posed tentacles were impressive, making it more than just a blocky monster – but ultimately they had focused on scale rather than detail. It proved to be a sound move, as the build both looked impressive and was able to crash to the ground in a satisfying way.

Unfortunately, many of the other builders do not seem to be up to the challenge here. There are not enough contestants displaying building prowess, with many of the models failing to live up to the standard that can be seen at a LEGO convention. Perhaps this week’s builds were too focused on being breakable to have the right aesthetic quality – next week will be a good opportunity to determine whether the top few teams are going to walk it to the final.

While it was a shame to see Jessie and Kara go, the pair didn’t quite seem to have the skill with the brick that is necessary to build against the clock on television, so it made sense that they would be the first to leave.

As with last week, the time flew by and it is a shame that there is not more opportunity to see the process of building and the completed models, something that the Australian edition demonstrated can be quite fascinating. Thankfully, Will Arnett’s comedic chops keep things entertaining and as the crowd thins out there should be more time for individual personalities to shine.