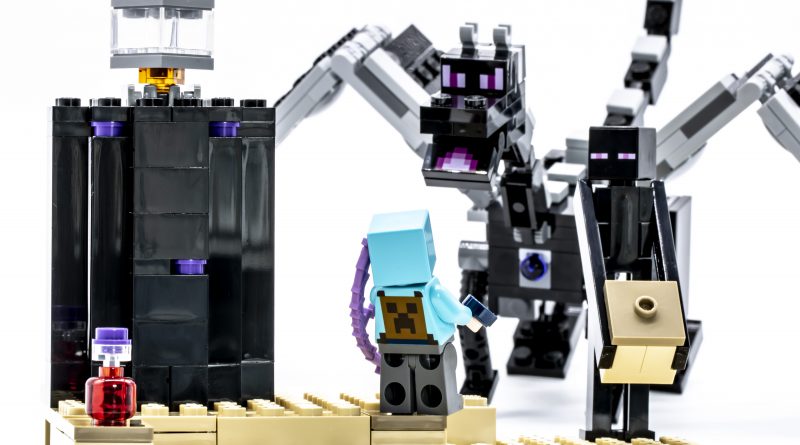 LEGO Minecraft 21151 The End Battle has everything needed to recreate Minecraft’s final face-off – but does it offer up anything to all but the most hardcore of fans?

21151 The End Battle contains a Minecraft ‘End’ setting with one Obsidian Pillar and End Crystal. A poseable Ender Dragon, an Enderman figure and an exclusive Dragon Slayer minifigure are included in the little set. 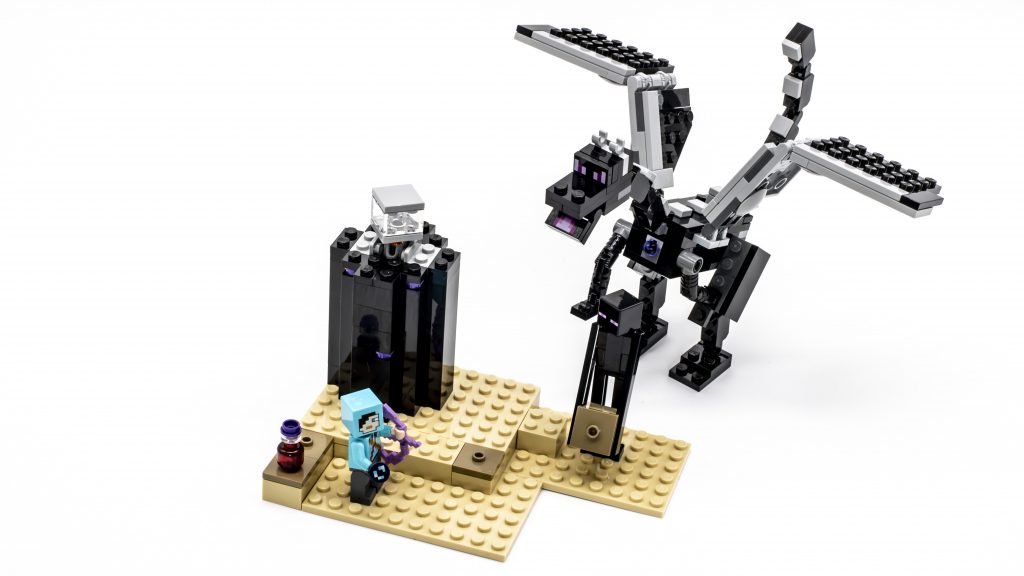 The End is the last area that players will explore in Minecraft and once there, there are only two ways out – defeat the huge Ender Dragon, or die. In order to deal damage to the dragon, players must destroy Ender Crystals, using an enchanted bow, while at the same time avoiding an army of Endermen. To say it is an epic showdown doesn’t do it justice.

21151 The End Battle tries to recreate that drama as far as possible and is divided into two main elements – the Ender Dragon and The End landscape.

The landscape feels like quite a lazy design using three tan 6×10 plates and not much else. The Obsidian Pillar has a bit more going on, the black is at least broken up by purple 1×1 round plates, but it’s not a challenging build and is too quick to assemble.

An Ender Crystal sits atop the pillar and can be ‘destroyed’ by way of a very nifty play feature – a vertically mounted stud shooter. It works brilliantly and for an assembly otherwise devoid of smart design this is a stand out inclusion.

The Ender Dragon is the largest of all creatures found within Minecraft and although this version is scaled down, it looks great and is an enjoyable build. Hinge joints are used for the neck, tail and wings, making the finished design really well balanced allowing for a range of dynamic poses. The spring shooter is integrated really well, launched by pressing one of the dragon’s scales.

Two figures are included, an Enderman and an exclusive Dragon Slayer minifigure who comes armed with an enchanted bow, potion of healing and two printed Ender Pearls. There’s also a code printed on a 2×4 brick, which unlocks the skin within Minecraft: Bedrock Edition.

The End Battle is considerably cheaper, and smaller, than 2014’s 21117 End Battle but it’s still a faithful representation of the final boss fight. Being so accurate to the source material means it is not the most aesthetically pleasing thing to look at and the colour scheme of predominately tan and black doesn’t help matters much.

The play features are fun but not enough to save an otherwise lackluster build. Overall this is a set that fans of Minecraft will no doubt love but causal fans will want to pick their battles and look elsewhere.

21151 The End Battle is available now at shop.lego.com. You can help support Brick Fanatics’ work by using our affiliate links.