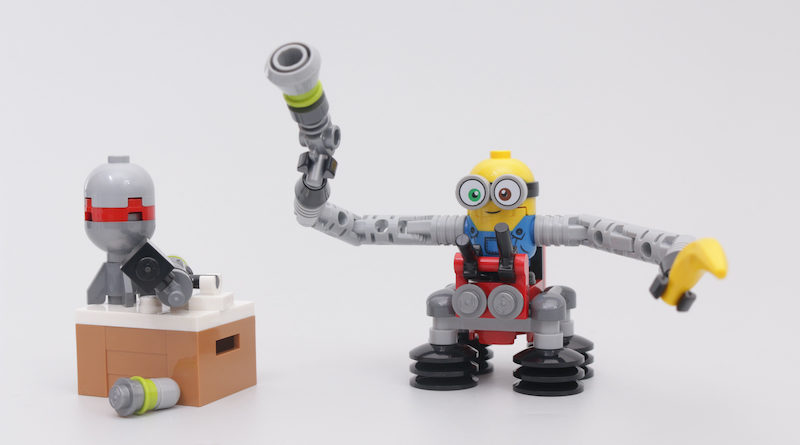 We’re not sure what LEGO Minions polybag 30387 Bob Minion with Robot Arms is entirely about, but it’s a fun little gift-with-purchase available from June 24 to July 11.

Revealed back in February to tie in with the upcoming (and continually delayed) Minions: The Rise of Gru film, 30387 Bob Minion with Robot Arms is available as a gift-with-purchase at LEGO.com and in LEGO stores from June 24 to July 11, or while stocks last.

Any spend of £40 / $40 / €40 or more on LEGO Minions sets made during this time will receive a free copy of this little polybag set.

The set in question is… indescribable in many ways, but includes an adorable LEGO Minion – Bob – some comically-oversized robotic arms, a little red machine, a large bomb, an equally large rocket launcher and a chest where his normal-size arms and a laboratory beaker can be found.

For one polybag, it’s a great selection of parts, both in quantity and variety. And even if Minions isn’t your thing, this is a fun little collection of builds, complete with one of the cuter interpretations of the yellow and blue critters that have taken over popular culture this past decade.

And ultimately, it’s one more reason – whether you are Minion mad or have somehow successfully navigated the last 11 years without coming into direct contact with a Minion of any sort – to take a look at those LEGO Minions sets.

Good luck not falling in love with the little guy…

This polybag was provided by the LEGO Group for review.

Support the work that Brick Fanatics does by building your LEGO Minions army via one of our affiliate links – thank you!