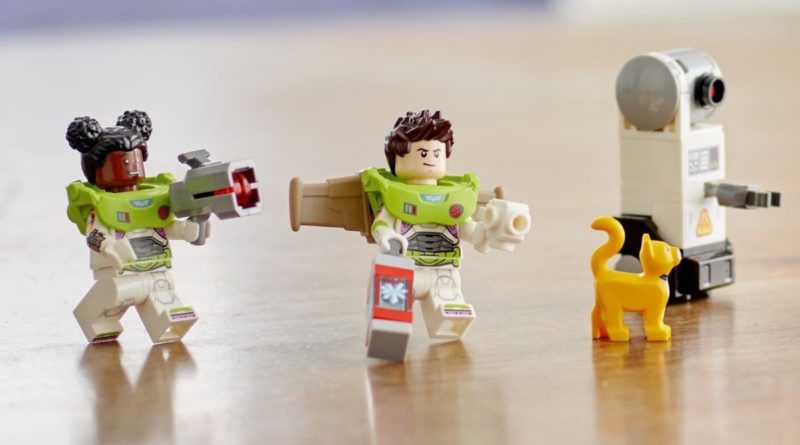 The LEGO Group is about to release a new Buzz Lightyear minifigure for Pixar’s latest movie – but it’s missing one of the character’s most distinguishing features.

When you think of Buzz Lightyear as you know him in Toy Story, you probably think of his white, green and purple space suit, those iconic deploying wings, and ‘to infinity, and beyond’. But if someone asked you to describe his physical features beyond his outfit, the first thing you’d likely point to is his illustrious – and prominent – chin.

The character in Disney Pixar’s Lightyear isn’t exactly the same as the one in Toy Story, because this is the fictionalised version of Buzz on which the action figure is based in-universe – have you lost track yet? – but given one is supposed to be inspired by the other, they obviously share a very similar design. And that includes the space ranger’s chin.

The three minifigure-scale LEGO Lightyear sets launching later this month accurately capture most other elements of the character as he appears in the movie – from his various outfits to his spiky hair – yet the same can’t really be said for his face print, which completely misses the opportunity to portray his pronounced chin.

It’s not the kind of thing that would deserve (or even benefit from) a dedicated mould, but it could arguably have been achieved through printing alone. Simply shifting his eyes and mouth just a few millimetres up his head could have made all the difference, as you can see in our quick edit below.

It’s a tiny change, but one that goes a long way to communicating one of the character’s only distinguishing features – and would therefore make his face print a little less generic in the process, because as it stands it’s as basic as it gets.

The difference between minifigure and source material is also exacerbated by the fact that Buzz is right there on the box art, prominent chin and all. It’s not the first time product packaging has done a disservice to a minifigure (America Chavez’s hair in 76205 Gargantos Showdown springs to mind), and probably won’t be the last, but it’s unfortunate all the same.

Thankfully, it’s also a relatively minor issue among what looks to be a trio of otherwise well-designed and imaginative sets, all of which come with some great minifigures (Buzz’s face aside). You’ll be able to pick up 76830 Zyclops Chase, 76831 Zurg Battle and 76832 XL-15 Spaceship from April 24 at LEGO.com.