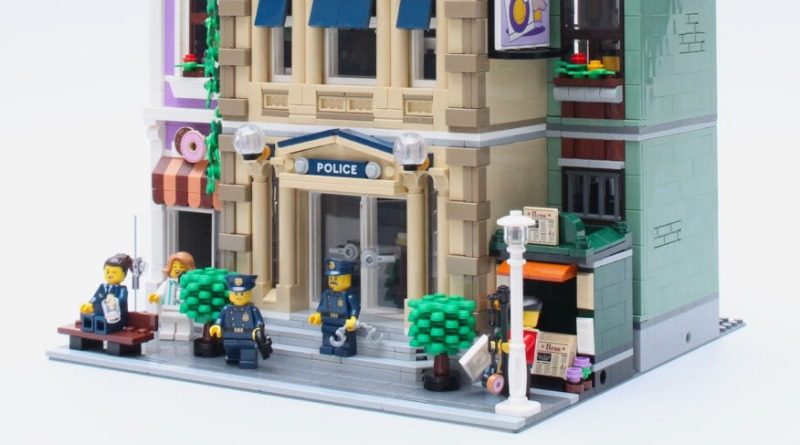 The latest addition to the Modular Buildings Collection brings a LEGO CITY staple into the fold with 10278 Police Station. But can this ode to LEGO law enforcement bring an expert touch to the boys in blue?

Believe it or not, the Modular Buildings Collection is almost old enough to get married, buy a lottery ticket and join the army (at least in the UK). And as the LEGO Group approaches the 16th entry in one of its most popular series, it would have been easy to get complacent. After all, there’s a certain subset of collectors who feel duty-bound to buy the latest modular building, regardless of its quality or desirability. But 10278 Police Station isn’t the work of a design team resting on its laurels: far from it.

Instead, it’s yet another shining example of the sheer talent flowing from Billund at the moment, designed with all the confidence that a Creator Expert – sorry, 18+ – set deserves.

Unless this is your first rodeo with a LEGO modular building, you’ll probably know what to expect from 10278 Police Station. You’ll start by laying down pavement and ground floor tiles, before building up the surrounding walls and advancing vertically, one removable storey at a time. That’s mostly par for the course here, only with the usual exception that nothing is ever really ‘standard’ in the detail of these sets, and the less usual exception that part of 10278’s ground floor is actually raised from the baseplate.

That choice has been made in order to implement one of the set’s earliest – and most endearing – surprises, which sits directly beneath the jail cell attached to the police station. Raising the floor from the baseplate has allowed designer Chris McVeigh to build in a half-finished escape tunnel for the cell’s occupant, accessed beneath the appropriately basic bed. There’s even a spoon to continue the dig. It’s just one of the many delightful narrative touches dotted throughout the Police Station, which builds on (or apes) stories of previous sets in fun and often surprising ways.

That’s part of the magic behind the modular buildings, which since 2014’s 10243 Parisian Restaurant have moved beyond relying solely on their minifigures for story-driven play opportunities. But there’s another major draw of this series that’s arguably been there since the start, with 2007’s 10182 Café Corner, and that’s the sheer variety you’ll find throughout the build. One moment you’re stacking the basic building blocks of LEGO in 1×2, 1×4 and 1×8 bricks, and the next you’re twisting 1×1 brackets against 2×2 corner tiles to form the basis of a vent, or pushing 1×1 tiles with shaft into rounded 2×2 plates with open studs to flip the direction of the build multiple times within a single sub-assembly.

What that all really amounts to is this theme’s ability to speak to the timelessness of LEGO. Stacking regular bricks to build walls will conjure up memories of the basic structures you constructed as a kid, but it’s done with such precision across the entire Modular Buildings Collection – and mixes in so many novel techniques along the way – that it never feels basic. And make no mistake: 10278 certainly has its own share of new techniques to impress you.

Take the staircase that spans the entire central building, for example. It’s so deceptively simple that you’ll wonder how it’s never been done in an official set before, but it’s also incredibly satisfying precisely because it doesn’t rely on a bunch of new parts. In fact, it’s simply a combination of ‘facet’ bricks in 3×3 and 4×4, stacked and turned on their sides. The railings could stand to rise a little higher (health and safety clearly isn’t a big issue in this plastic world), but the use of the relatively new triangular tiles gives it some flair.

Those kinds of ingenious techniques are scattered across the build, but we won’t spoil them all for you here. Suffice to say that there’s enough to keep you engaged to the point that you’ll still be left wanting more long after you’ve placed the last brick. (It’s a good thing the modular building aftermarket is so cheap… erm, never mind.)

Much of that engagement is fuelled not only by those techniques, but the set’s narrative touches, too. It doesn’t begin and end with the tunnel beneath the cell – there’s a whole story baked into the accompanying doughnut shop, with the newsstand proprietor thieving pastries (his bed in the apartment above conveniently folds up to reveal a hole in the floor) in order to write his own headlines. Quite why he’s decided to do this literally next door to a police station is anyone’s guess, but it’s a welcome return of the storytelling built into the likes of 10251 Brick Bank and 10246 Detective’s Office. It doesn’t detract from the set, either, so you can safely ignore it if you prefer.

One new part the LEGO Group has championed in 10278 Police Station is the 1×3 inverted slope, but it’s a curious addition. It’s predominantly used to smooth the transition between the lower internal walls, which doesn’t really feel necessary. It’s put to better use in light grey for the roof edge, which also features an ingenious application of an unprinted element originally used in Minecraft sets. Perhaps the more immediately interesting pieces here will be those that are printed, because there’s mercifully no sticker sheet in sight. (That’s extremely welcome where the billboard’s 6×6 tiles are concerned – aligning them would have been a nightmare.)

By the time you place the roof on top, the first thing that will strike you about 10278 Police Station is just how big it is. Yes, it’s only that central structure that rises so high, but given it stretches over 18 of the baseplate’s 32 studs at its widest point, it’s effectively the majority of the model – and arguably feels like even more. Where previous modular buildings have sacrificed size while chasing interior detail, the Police Station feels like it manages the best of both worlds. From the interrogation room, bathroom and investigation board to the typewriter, telephone, desks and even a water cooler, 10278 has basically everything you could want from a modern police station at the 18+ level.

The second thing you’ll appreciate is just how visually cohesive the final model is. Going so narrow with the doughnut shop and splitting the police station over two colours could have led to a disjointed aesthetic. But thanks to a combination of smart colour blocking – it looks absolutely seamless from the back – and intricate exterior details, from the leaf elements that run up the length of the police station to the bird perched on the windowsill (which has also been thieving doughnuts!), 10278 Police Station feels like it’s been plucked straight out of a living, breathing city.

The modular building minifigures made the leap from classic smiley faces with 2018’s 10260 Downtown Diner, and whether you appreciate that or not is entirely subjective. But the prints here add so much to the story and character of the set that it’s hard to fault them: the female police officer’s shut eye allows her to peer through a camera viewfinder to take criminal mugshots; the aged print on the police captain clearly establishes a hierarchy in the included trio of staff; and the newspaper kiosk owner’s shifty eyebrows are as sure a sign as any that he’s up to no good.

Honestly, we could have done with another character here for the price – a crook in prison fatigues to place in the cell, perhaps, or a civilian to shop at the doughnut store – but those kinds of generic minifigures are easy enough to acquire, even if just through your local LEGO Store’s Build-a-Minifigure bar (in non-COVID times, of course).

Part of the Police Station’s appeal lies in how well it straddles both approaches of previous modular buildings, fully furnishing the interior without skimping on exterior size and detail. That does all come at a cost, though – as far as this subtheme is concerned, this is second only to 10255 Assembly Square in both price and piece count. And while that 4,002-piece set is only £10 more than 10278 Police Station, that really just speaks to how tremendously good value Assembly Square is. It certainly doesn’t detract from Police Station, which very much feels like £170 worth of LEGO bricks.

It’s also worth applauding this subtheme’s consistency, even while other themes and models go far above and beyond what was once its higher price point in the LEGO line-up. Yes, 10278 Police Station is almost twice the price of 10182 Café Corner, but it also contains almost 50% more pieces. If that maths doesn’t work for you, don’t forget that there’s 13 years of inflation to take into account, along with the comparatively rarer colours included here – and, of course, the fact that there’s not a single sticker in sight.

So while £170 is certainly still a premium price tag, you’re getting a premium product in return. In fact, you’ll probably have more fun putting this together than the £650 you can spend on 75252 Imperial Star Destroyer, or £450 on 10276 Colosseum. Compared to those mammoths, it’s basically a bargain.

When the LEGO Group first unveiled 10278 Police Station, we had misgivings over its mismatched heights and narrow side buildings. But having put it together, it’s clear that any doubts were misplaced. It’s not just that the build is so enjoyable – and make no mistake, it’s heaps of fun – but the final model sits in such visual harmony that whether this is your first modular building or your 16th, you’ll enjoy it just as much solo on your shelf or among your wider LEGO city.

That’s because the colours and architectural styles are complementary not only within this set, but even compared to the buildings that have come before. Maintaining that visual cohesion over more than a decade can’t be easy, but 10278 Police Station manages it with aplomb, while still standing alone as a worthy and expansive new addition to the ever-expanding street.

You can support the work of Brick Fanatics by ordering your copy of 10278 Police Station from LEGO.com using any one of our affiliate links.