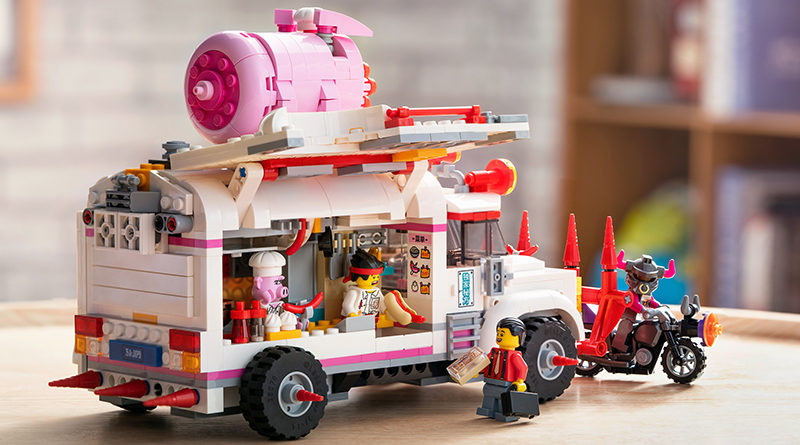 LEGO Monkie Kid was announced yesterday, and sets are available to order now at LEGO.com. Eight sets make up the initial range, which sees an ordinary boy discover Monkey King’s legendary staff and become the chosen one. With help from his friends, Monkie Kid must prevent the Demon Bull King and the Bull Clones from taking over the city.

Here are the eight sets that are available to order from LEGO.com:

Children can role-play epic adventures as heroes Monkie Kid and Sandy – or villainous Bull Clones – with the LEGO® Monkie Kid™ Iron Bull Tank (80007). This LEGO armoured toy vehicle features a rotating turret with a 6-stud rapid shooter, oil-barrel-launching function and other cool details to inspire battle action. An exciting LEGO gift idea for kids aged 7 and up, the toy playset includes 3 minifigures and a Sandy figure with weapons to inspire youngsters to create new stories every playtime.

Kids will love role-playing as hero Monkie Kid, piloting his Cloud Jet, battling for The Golden Staff and saving a civilian with this cool LEGO® playset (80008). The aircraft toy features disc shooters and a minifigure cockpit that detaches to become a speed bike, while enemy Red Son has a buildable Twin Fire Jet Pack and Power Glove for conflict play. A super LEGO gift idea for kids aged 8 and up, it includes 4 minifigures so children can pretend to be their favourite characters.

Inspire action-packed playtime adventures with this LEGO® Monkie Kid™ toy playset (80009) featuring Pigsy’s Food Truck and 2 buildable toy motorcycles for the food-stealing Bull Clones. The LEGO food truck toy has opening sides for easy access to the kitchen and command center. Fans will love fun features like the fake refrigerator with weapons inside and the pig-shaped rapid shooter on the roof. A super LEGO gift idea for kids, it includes 5 collectible toy minifigures to role-play exciting stories.

Young Monkie Kid fans will love creating epic scenes with this LEGO® Demon Bull King building toy (80010). A brilliant LEGO gift idea for kids aged 9 and up, it features a huge, posable Demon Bull King model, with many cool features to build and inspire play such as a LEGO light brick that lights up the torso, stud-shooting cannons, a ‘flame thrower’ and a big axe. The Monkie Kid, Pigsy and Princess Iron Fan minifigures each have weapons, including The Golden Staff, to boost the battle action.

Children can dream up limitless action-packed stories with this LEGO® Monkie Kid™ toy building set (80011). Red Son’s Inferno Truck has many play-inspiring features, including a button to launch the integrated race car toy and fire the 6-stud rapid shooter, plus a winch to drag the ‘exploding’ ATM out of the brick-built Speedy Panda store. A great gift idea for kids, this LEGO tow truck comes with 7 minifigures for role play and a colourful Pigsy delivery tuk-tuk for Monkie Kid to drive to rescue store owner Lee.

Let children discover the cool features inside LEGO® Monkie Kid’s Team Secret HQ (80013). This LEGO ship toy opens up and can be divided for easy access to the detailed living area, workshop, posable mech and more. The toy crane on the deck can be used to grab the Bull Clones’ stud-shooting assault boat, and Pigsy and Mei’s fun buildable water jets add to the battle play options. A fabulous gift idea for kids, this LEGO set includes 7 minifigures with weapons, plus Sandy and Mo the cat figures to role-play exciting adventures.

“I am super excited about the launch of LEGO Monkie Kid,” says Julia Goldin, Chief Marketing Officer at the LEGO Group. “This fantastic new play theme is deeply inspired by Chinese culture and built on an esteemed story that is treasured by all generations. We know kids will be delighted by the world of LEGO Monkie Kid, and I can’t wait to see how they immerse themselves in building, role playing and creating new stories through this theme. This is a very exciting innovation for the LEGO brand and one that demonstrates our commitment to building a strong future in China.”