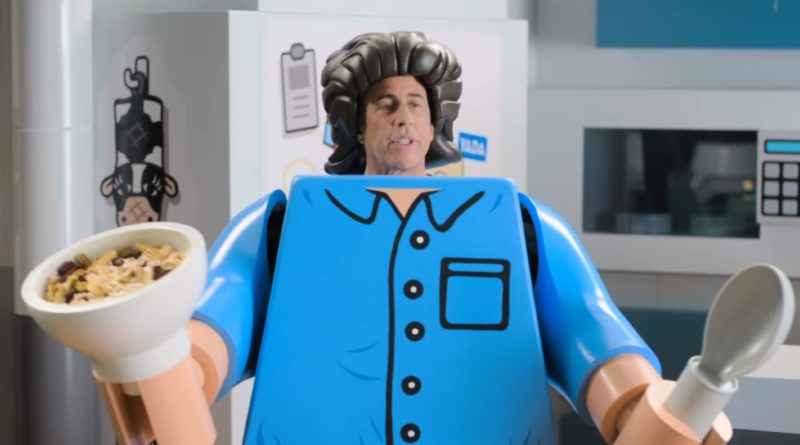 To promote LEGO Ideas 21328 Seinfeld and Seinfeld’s arrival on Netflix, Jerry Seinfeld has been shrunk down to a LEGO minifigure, with help from Bryan Cranston.

LEGO Ideas 21328 Seinfeld is now available on the official online store, revisiting the classic sitcom with a variety of new minifigures and a reference-filled build. In what is likely no coincidence, the show is also now streaming on Netflix. To help promote both, the LEGO Group and Netflix have downscaled (or upscaled?) the show, complete with minifigure Jerry.

Uploaded to the Netflix is a Joke YouTube channel – an official advertising avenue for the streaming platform – the new promotion showcases the shrunken (or is that blown-up?) concept, with narration from Bryan Cranston, who played Dr. Tim Whatley in a handful of the show’s episodes (before going on to star in Malcolm in the Middle and Breaking Bad). There’s also a cameo from another character from the show, Elaine’s on-off boyfriend Puddy, played by Patrick Warburton.

Inside the large LEGO version of Jerry’s apartment is Jerry himself, quite literally captured in minifigure form and forced by Netflix to face a life of bricks from now on. How does that bowl of LEGO cereal taste?

Everything from the phone to the sofa and even the kitchen has been remade to authentically represent the pieces and the minifigure costume can even grip relevant bricks appropriately. A plastic wig of the new Seinfeld hair element is even included for Jerry to wear. Also, did you spot that possible new set at the end?

Not to be outdone by Netflix, Jimmy Fallon hosted the actor in a special segment of The Tonight Show, not only transforming Jerry and Jimmy into life-sized minifigures but the talk show’s set too. You can watch the full clip in the Tweet above, with a surprisingly destructive series of events taking place.

You can find LEGO Ideas 21328 Seinfeld on the official online store and read up on the model in our thorough review to explore every inch of the build and its cast. Unfortunately, the LEGO Seinfeld costumes as seen in the above videos are not available ahead of Halloween.