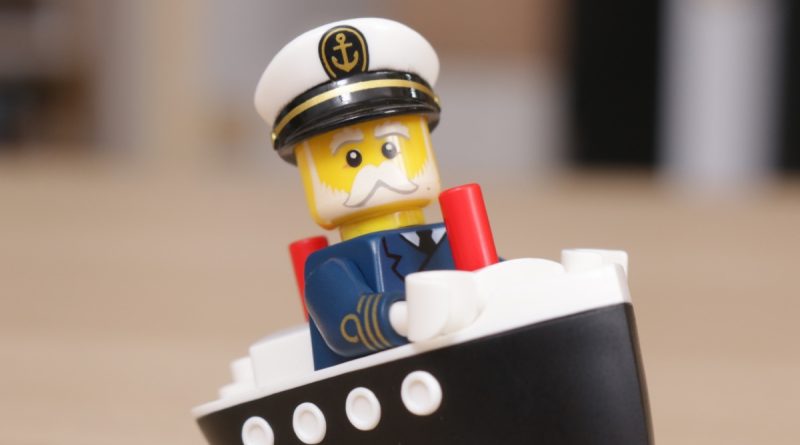 The Ferry Captain minifigure in LEGO Collectible Minifigures 71034 Series 23 bears a striking – and probably not coincidental – resemblance to Edward Smith, captain of the RMS Titanic.

One of 12 new minifigures included in 71034 Series 23, the Ferry Captain is probably the stand-out costumed character in the entire line-up – not least because he holds up as a detailed and thematic minifigure even apart from his ferry costume. But there’s another reason you should be angling for this blind-bagged minifigure above all others in 71034 Series 23, and especially if you own 10294 Titanic.

The LEGO Group’s biggest Icons set to date (totalling 9,090 pieces) eschews minifigures altogether, aiming for an adult audience that presumably doesn’t care for tiny plastic people. But if you count yourself among the collectors who prize the LEGO minifigure, the Ferry Captain is practically the perfect addition to 10294 Titanic, because he’s almost certainly inspired by the cruise liner’s real-life captain.

Born and raised in Staffordshire, Smith left school aged just 13, and began a career in the merchant navy. He eventually joined British shipping company the White Star Line, where he quickly rose through the ranks with a reputation as a ‘safe captain’. From 1904, he began commanding the company’s newest vessels for their maiden voyages, including the Baltic – then the largest ship in the world.

His prowess and experience saw him later take command of the Adriatic, the Olympic and – finally – the Titanic. Sources disagree on whether Smith was planning to retire after the ocean liner’s maiden voyage, but he would never get the chance: the captain ultimately went down with the ship when RMS Titanic struck an iceberg on April 14, 1912.

Historical photographs of Smith in the prime of his career portray a man with a full, white beard and pronounced moustache – features eerily similar to those of 71034 Series 23’s Ferry Captain. And while the LEGO minifigure obviously doesn’t include specific details of Smith’s hat and uniform, the overall resemblance to his outfit (as seen on the Olympic) is uncanny.

That said, ask anyone to draw a naval captain’s uniform, and chances are they’d come up with something similar to the minifigure’s design: it’s a universal design, after all. But what’s less universal is the face print on the Ferry Captain, and it’s hard to unsee the similarities to Edward Smith. If you own 10294 Titanic, you owe it to yourself to get your hands on this Series 23 minifigure while you can.

Check out our full review of 71034 Series 23 here. All 12 of its new minifigures are available now at LEGO.com, in LEGO Stores and through all good third-party retailers. Like all Collectible Minifigures series, however, it will only remain in production until the next batch hits shelves, and is due to retire by the end of this year.