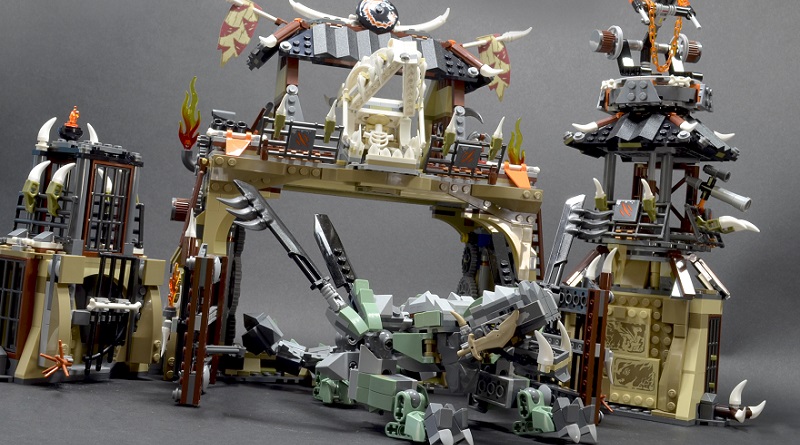 The ninja face off against the Dragon Hunters in LEGO NINJAGO 70655 Dragon Pit – is the set as epic as such a climactic battle demands?

For those familiar with my reviews, you will know that playsets are not usually a hit with me. Every so often though, the LEGO Group releases a set that bucks that trend. 2016’s 70323 Jestro’s Volcano Lair is a great example. It has an interesting look, some cool new parts and fun play features. Does this year’s 70655 Dragon Pit join the ranks of “best playsets”?

This set creates the Dragon Pit environment, where the Dragon Hunters have been keeping Earth Dragon captive. Thankfully, the ninja are here to save the day and do battle with Iron Baron at these imposing gates. 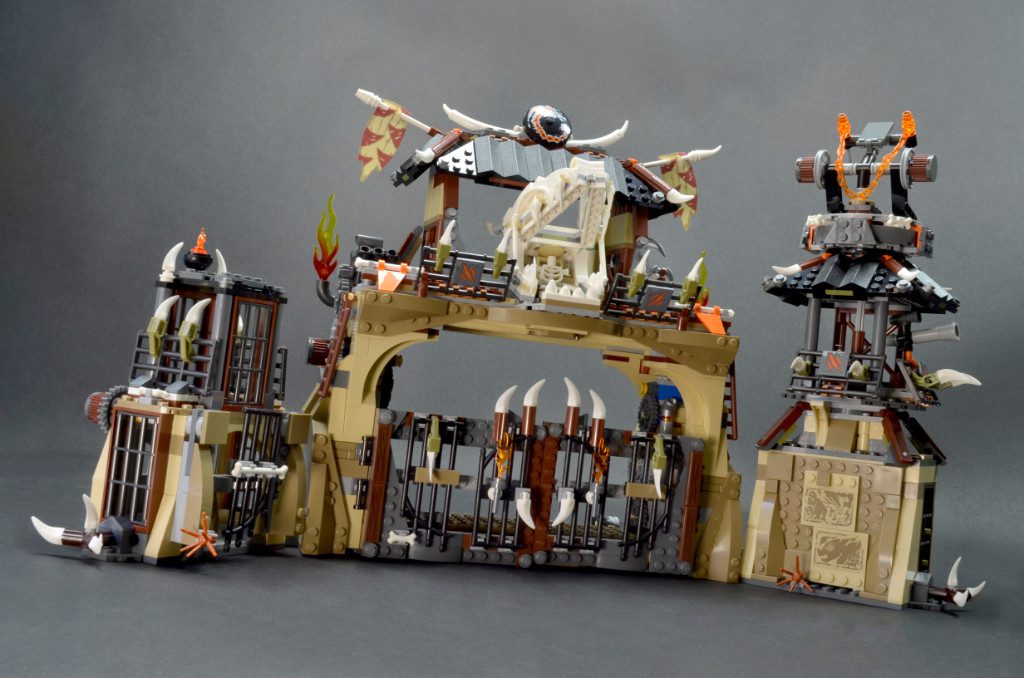 The fact that the NINJAGO story kind of re-invents itself every season means there is always a lot of opportunity to try new things and create lots of different locations. Fans of post-apocalyptic landscapes will find a lot to like about this set. The various spike-laden gates, cages, and fences give the scene an appropriate sense of danger. The use of inverted arched gate elements also helps give the set a fresh look.

The giant skull throne is a terrific bit of design, and many of the smaller details such as the diesel engine used to power the gates are wonderful aesthetic touches that go a long way to make this a convincing environment. It should also be said that the graphic design team for this set once again do not disappoint. The minifigure printing, as well as other graphic touches in the NINJAGO line are always a high point, and those present here are no exception. The costumes for each of the ninja are some of the best of the series. Likewise the armour and weapon design are both on point here with a lot of new molds.

Now it’s time to talk about the build experience. This is an area where for me, a lot of playsets get tripped up. From a builder’s perspective, they tend to be a bit of a snooze thanks to lots of large panels and extra large bricks. This is not at all the case here. While it’s true there are a number of gates and other compound bar elements which take up space, their role in terms of form here is just as important as the function. There’s a tremendous amount of SNOT building on display, and the mechanism to open the main gate is interestingly designed and fun to build. The same can be said for the throne and pagoda, both of which sporting fun designs and a level of polish not necessarily common in playsets.

Let us not forget the titular dragon of 70655 Dragon Pit. This craggy critter is a really fun bit of design in its own right, as opposed to simply being an accessory build. The gray and sand green color scheme looks great, and whole thing is impressively poseable. It fits right in with the rest of the NINJAGO dragon pantheon.

Objectively speaking, one of the issues a lot of playsets face is that they don’t necessarily translate well from 3D object to photograph. Looking at the box cover, 70655 looks cool, but not really eye popping. I ran into this issue myself when photographing the set for the review. It’s difficult to really communicate what’s great about set through photos alone. Photos tend to make it appear quite flat, when in reality it has a lot of interesting, dynamic things going on visually.

70655 Dragon Pit is easily among the best playsets the LEGO Group has produced. The build experience is very good. At no point does it get repetitive or dull, and a number of the techniques used are a joy to uncover. While one must admit the price tag is a bit high, it is much easier to see what that money is getting you when compared to a similarly priced City set, for example. If found at a discount, this set is an easy recommendation.

70655 Dragon Pit is available now at shop.lego.com. You can help support Brick Fanatics’ work by using our affiliate links.