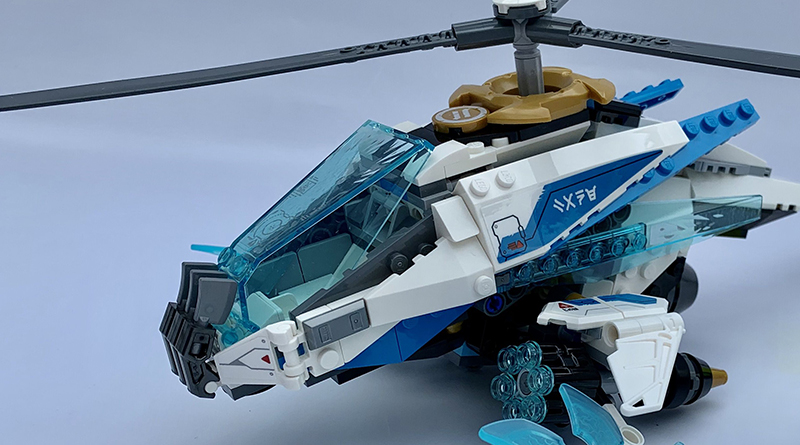 As ever, LEGO NINJAGO offers a broad range of sets. In this case, 70673 Shuricopter offers a hefty helicopter packed with weapons at a size that is sure to intimidate enemy minifigures. With white and trans-blue pieces making it clear that this airborne vehicle belongs to Zane, it also includes Jay and General Vex minifigures.

The new NINJAGO subtheme brings a new variant of the fictional martial arts – Forbidden Spinjitzu, the dark counterpart of the martial art of Spinjitzu. Legend has it that the young Wu and Garmadon took the two scrolls created by the first Spinjitzu Master, which contain all of the knowledge and power of this forbidden art.

The star of this set is the Shuricopter and on the surface it may appear to be a fairly pedestrian build, that is until you notice the interesting angle of the tail. I found the initial part of this build very engaging given the effort that has gone into creating the angles as well as accommodating the mechanism to spin the rotors. The completed Shuricopter looks great and I particularly like the use of meat cleaver parts to create the detailing on the lower part of the cockpit. The build includes stickers, which add to the overall affect without feeling overwhelming to apply.

The main features of 70673 Shuricopter are the function that allows the rotor to spin through a mechanism at the rear, and the way that the shuriken slicers spin when it lands – both add to the playability of this set.

This set contains three minifigures that are great additions to any NINJAGO collection. The first is Zane who is clearly the pilot of the Shuricopter as his outfit matches the colour-scheme perfectly. Zane has a dual-printed torso and printed legs, equipped with both a katana holder, a silver katana, and two pearl gold shurikens.

The General Vex minifigure is really neat and again has a dual-printed torso and printed legs. That said, the torso printing isn’t particularly visible as it is masked by his impressive ice armour. The minifigure utilises splashes of trans light blue across the helmet, body armour and even one of the arms creating a cool (pun intended) overall effect. General Vex is armed with the Scroll of Forbidden Spinjitzu, in addition to scroll parts that are included throughout the set.

The final minifigure is Jay FS (Forbidden Spinjitzu) who may be without weapons, but does come with his powered-up hood element and the ninja tornado spinner element, which is new to this subtheme. The minifigure also features printed legs as well as dual-printed torso and head. The hood element is an effective mix of blue and neon-green which is wonderfully executed – these are minifigures that we have become very familiar with and it is great to see them reimagined in new and exciting ways.

There doesn’t seem to be any sign of LEGO NINJAGO losing its appeal, especially when the release of sets is so neatly choreographed with the television series. For that reason, this will appeal more to younger LEGO enthusiasts than adult collectors, but that doesn’t take anything away from the playability and swooshability of this set, enhanced by the great minifigures, cool accessories and ninja tornado spinner.

70673 Shuricopter is available now at LEGO.com. You can help support Brick Fanatics’ work by using our affiliate links.