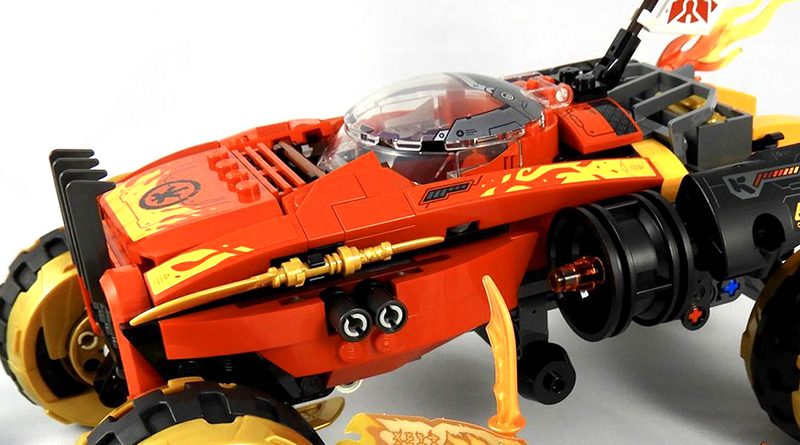 Does LEGO NINJAGO 70675 Katana 4×4 offer a rugged machine worthy of adding to the ninja arsenal?

LEGO NINJAGO continues to deliver bold, brash vehicles and 70675 Katana 4×4 brings a beast of a car in red and gold for the firey hero Kai. While the model is all about the car, five minifigures are also included to flesh out the scene. This is from the Secrets of the Forbidden Spinjitzu subtheme, which brings Forbidden Spinjitzu, the dark version of the Spinjitzu martial art that the ninja practice, to the story.

The centrepiece of this set is clearly the Katana 4×4 and it is an impressive vehicle to build. The parts usage is primarily red with splashes of gold and black, making for a very effective combination. I love the construction of bulky wheels with fantastic pearl-gold rims either side of the tyres. The chassis rises above any pedestrians and the build techniques give it a rugged, impenetrable feel, which is a feature you’d look for in a 4×4 going into battle.

The large chassis contains a cockpit with room for just one minifigure, and the proportions really give the impression that there’s a large, powerful engine under the hood. The Katana 4×4 is battle-ready with great playable features. The rotating shuriken slicer is neatly hidden beneath the vehicle with a mechanism that facilitates the ramming function to clear the way of any minifigures.

What could be mistaken for headlights either side of the front grill are actually spring-loaded shooters and, if that’s not enough to see off the enemy, there is also a handy weapon storage compartment just behind the cockpit. 70675 Katana 4×4 boasts two impressive, black turbo boosters with flame exhaust elements and as a final flourish there’s a ninja flag behind the cockpit.

This set is a great way to increase your collection of NINJAGO bad guys and the selection of minifigures is impressive. The set includes three enemies – Char, Pyro Whipper and Pyro Slayer – each equipped with weapons including Char’s snake sceptre, a whip for Pyro Whipper (naturally) and a sword/shield combo for Pyro Slayer. Each of these figures includes a printed torso and nice touches of trans-orange on the heads.

The set also includes the Scroll of Forbidden Spinjitzu weapon which includes an alternate scroll and its own stand. There’s also a generous set of weapons that can be stored in the storage compartment as well as weapons used as detailing on the Katana 4×4.

The Kai minifigure has a dual-printed torso and head. He is equipped with a katana holder. The Nya FS (Forbidden Spinjitzu) is also dual-printed and includes her power-up hood element which is new to the subtheme and is well executed in black and trans-blue. Nya’s tornado spinner neatly matches the minifigure colour scheme and can be used with great effect to defeat snake-like enemies.

70675 Katana 4×4 ticks a number of boxes – plenty of weapons, five minifigures and an impressive 4×4 as the main feature. It’s hard to find fault with a set that executes an idea this well and packs so many characters into the box.

70675 Katana 4×4 is available now at LEGO.com. You can help support Brick Fanatics’ work by using our affiliate links.