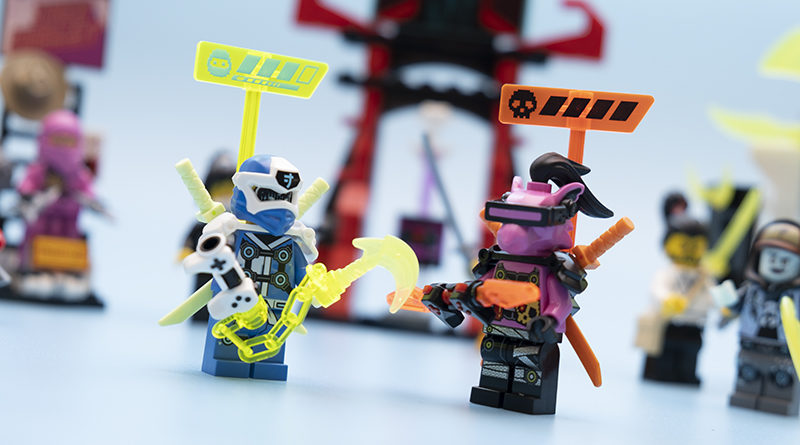 It’s a minifigure fest in LEGO NINJAGO 71708 Gamer’s Market, a build that sets the tone for the Prime Empire subtheme

LEGO NINJAGO is a wonderfully unpredictable theme. While it has continued to be an action-adventure based theme since it launched in 2010, it has constantly reinvented itself, placing the ninja characters into new settings with new threats. Prime Empire might be the wildest diversion yet, sending NINJAGO into a video game world.

Within the video game Prime Empire, Jay and his friends must win the three Key-tanas, so that they can rescue citizens of NINJAGO who are trapped within the digital prison. It is there that 71708 Gamer’s Market is based, a place where those who have travelled into the game can equip themselves with hats and weapons.

Usually, a LEGO set should be an excellent model first and foremost. Minifigures are the icing on the cake, the cherry on top or the cream in the middle. Very rarely should they actually define the set, yet in this case they do. 71708 Gamer’s Market offers three simple structures for a nice set piece, but it is essentially a very good value minifigure pack.

When building the models, there are no real surprises. It is a nice touch that the central Red Visor structure uses megaphones for details and it has a nice shape at the top. Visually it makes for a decent centrepiece, with a spot for the sword that is easily identifiable as some kind of in-game power up.

The weapon stand opts for a white and bright green colour scheme and is stocked with weapons. In fact, the best thing about this set after the minifigures is the number of weapons it includes. There are all manner of swords, axes, whips, energy things… easily enough to arm every character in the set and then some.

As for the hat stand, it’s another simple build, using a ladder piece to hold up the stickered sign. There is space for the Avatar Pink Zane minifigure and a display of hats, with a nice mix represented – cowboy, astronaut, sailor and top hat. It adds to the wackiness of this video game environment.

Those three sections may not be the most intricate builds ever designed in Billund, but they set the scene nicely. It is abundantly clear what they are, even without knowing what is going on in the latest batch of NINJAGO episodes.

Digi Jay is the minifigure that this set focuses around, with the character wearing a ninja style costume adorned with some extra hi-tech looking straps. A special head features his regular face on one side and a visor on the other, which lines up nicely with his cowl.

Along with other minifigures in this set and subtheme, Jay has an armour piece that covers his shoulders and allows him to store two katanas on his back. Most importantly though, a lightsaber blade slots into it, with a brand new element clipping to the top of that. It’s a printed element that shows how many lives the character has left, really helping to sell the video game environment.

Avatar Cole is not a particularly special minifigure, but captures the fun way that people choose to depict themselves very differently in a game environment. Similarly, Nya is wearing diving gear for some reason – her outfit and the hat rack combined give this set a real Time Cruisers vibe in terms of silly fun.

Avatar Pink Zane is an amazing minifigure, taking the typical ninja robes and presenting them in pink – because why not?

This set seems to take influences from a variety of places, with Avatar Harumi having a bit of a Kill Bill vibe – presumably any inspiration was subconscious, given that the target audience won’t have gone anywhere near Tarantino films yet.

Scott is a neat minifigure who contributes to the dystopian vibe Prime Empire seems to have, with an odd complexion and muted colours for his clothes. By contrast, Okino is a more traditional looking character who would be expected in NINJAGO. These juxtapositions are really reflective of the strange modern gaming worlds of Overwatch and Fortnite.

Richie is a decidedly video game-esque design, a pink anthropomorphic rat with a visor. It seems that the character was influenced by Teenage Mutant Ninja bad guy Bebop, with a delightfully punk aesthetic. The character has a different life meter to Jay, suggesting he is an opponent in the game.

Another enemy for the heroes is Red Visor, an army builder enemy whose design has a TRON vibe. The detailed printing captures the robotic look, which is completed with a trans orange visor contrasting with the black. A 404 number on the torso is a fun nod to the frustrating internet error.

Rarely does a set capture its sense of place through buildings and minifigures as well as 71708 Gamer’s Market. Taking NINJAGO somewhere entirely new, the bright green and red colours give the world consistency, while influences from dystopian future set films such as Blade Runner immediately jump out. This is one for fans of the theme, but also anyone who finds it visually striking – it looks just as good in person and with nine minifigures, offers great value for money.

71708 Gamer’s Market is available now at LEGO.com. You can help support Brick Fanatics’ work by using our affiliate links.