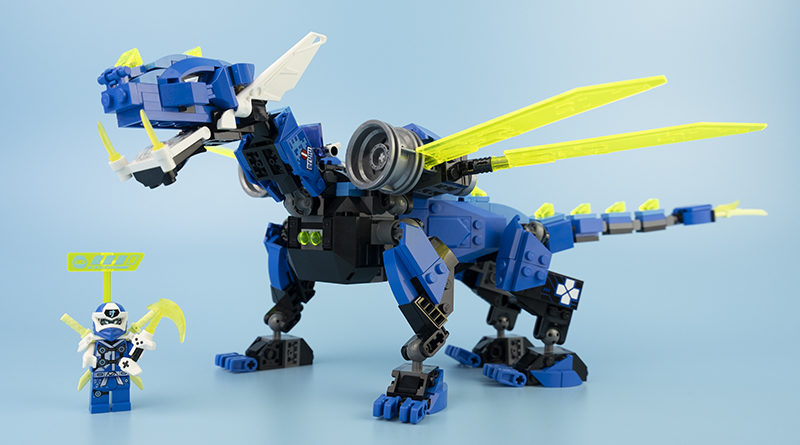 This year’s first LEGO NINJAGO launch mixes video game and dystopian cyberpunk future concepts for something visually fresh and distinctive. Arriving as part of the Prime Empire storyline, 71711 Jay’s Cyber Dragon offers a fearsome blue dragon, two ninja minifigures and three villains. So how does fusing a dragon with this video game work out?

There have been a lot of dragons in LEGO NINJAGO over the past nine years, with 71711 Jay’s Cyber Dragon bringing something new to the concept. As part of the Prime Empire storyline, the dragon has a unique look, with as trans-yellow wings and horns. These work really well in combination with the blue and make the being look visually striking and distinct from those that have gone before. The white around the head works really well too.

Building the body is fun and satisfying, but the legs, head and tail are where it really starts to come together. There is nothing especially new or ground breaking, but the way different techniques are used together works very well here. The head is probably the most interesting aspect of the build, where astromech droid legs are used to get the perfect angle below the eyes. It is actually quite a fiddly part to build, but well worth it for the perfect finished result.

The wings on the dragon are a bit strange, as they are connected to some kind of engine, but the funky gamer labels applied to them suggests that this dragon exists within the video game world of Prime Empire. It isn’t a typical dragon, because it is part of this virtual world within the world of NINJAGO.

That concept continues onto the seat on the dragon’s back, where there is space for Jay and another minifigure behind him. A little screen is situated there with the new controller element, so that he can pilot the dragon. This is where the trans yellow elements come in, as they signify the Prime Empire world.

The articulation on this beast is fantastic. There’s a joint in the middle of the creature, so it’s front half can be turning, which really gives the opportunity for some nice positioning. Each leg is joined to the body with a ball joint, with another one attaching each foot to the leg – again, it allows for a great deal of posing. There is a joint at the neck and one at the head too, plus Mixels joints all the way up the tail.  It really does allow for a great degree of motion and makes posing it on the shelf an awful lot of fun.

Digi Jay and Digi Nya take the traditional NINJAGO ninja minifigures and give them a video game infusion. They have different additions to their outfit that have a more digital vibe, with special visor face prints that are visible through the hoods.

Unagami, one of Prime Empire’s big bads, has a wonderfully evil design. Contrasting with the white hair and beard is an intricately printed red and black face, with a torso and robe combination printed to align with the Red Visor villains in other sets in the theme.

Hausner and Richie, the Bebop and Bebop of NINJAGO, are the most unique and interesting minifigures in this set. With special moulded heads, the minifigures are packed with character. Each one has a little build that gives them rocket powered surfboards to fly around on.

There have been more expensive, larger dragon sets on LEGO NINJAGO, which offer slightly more in terms of pose-ability. But for the size and price point, no-one will be disappointed by the great looking beast that is built in 71711 Jay’s Cyber Dragon.

71711 Jay’s Cyber Dragon is available now at LEGO.com. You can help support Brick Fanatics’ work by using our affiliate links. 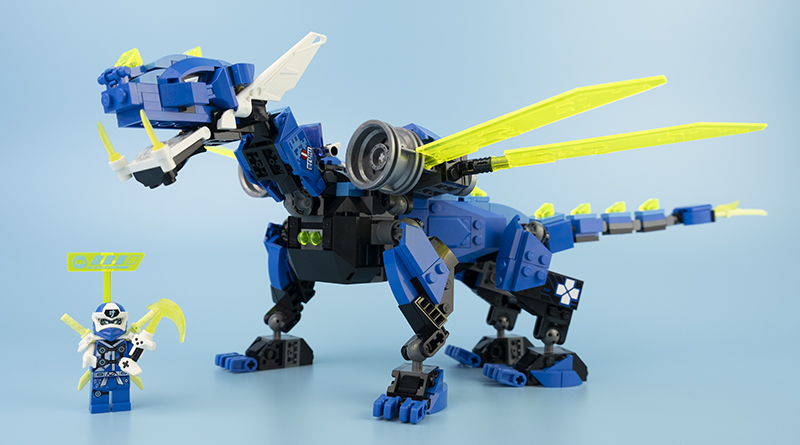