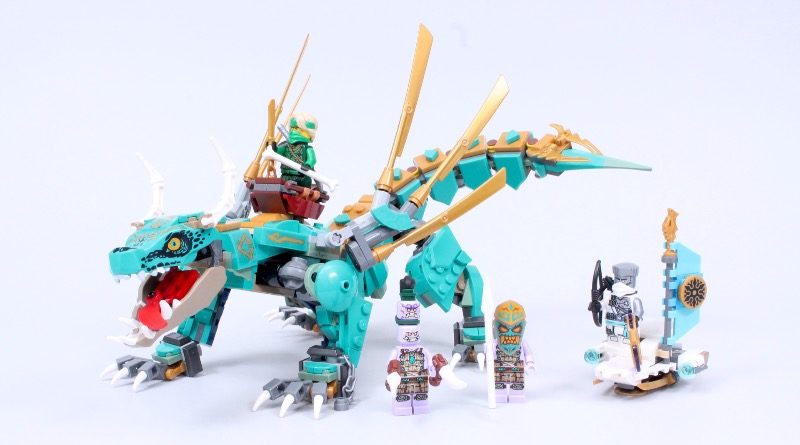 Another day, another dragon – but don’t take this latest LEGO fire-breather for granted, because 71746 Jungle Dragon is unlike anything we’ve seen before from NINJAGO.

Designer of 71746 Jungle Dragon (and former Brick Fanatics contributor) Jme Wheeler has said that he based the beast on a ‘big, hyper dog’. The set’s official images give us a good idea of the particular design points in which that influence can be felt – from the dragon’s huge, slobbery tongue to its fully-articulated tail – but the box art doesn’t always tell the whole story.

In putting 71746 Jungle Dragon together, then, just how clearly have those intentions come through – and how does it translate into a creature fit for both the ever-expanding pantheon of NINJAGO dragons, and more specifically for the tropical island aesthetic that anchors this entire subtheme?

If you’re looking for an obvious comparison point among this NINJAGO dragon’s predecessors, it could really only be 70612 Green Ninja Mech Dragon – from the lizard-like body and stepped tail to its diminutive (or in the latter set’s case, entirely absent) wings and relatively similar colour scheme.

Given the sheer quality of that The LEGO NINJAGO Movie set, we’re in a good place with 71746 Jungle Dragon before we’ve even opened the box. The build is pretty brief, as you might expect from a £35 set, and while there’s a bit of unavoidable repetition – particularly in the tail, but also around the symmetrical sides of the body and legs – the glorious mix of teal and pearl gold keeps you engaged throughout.

Unless this is your very first NINJAGO dragon, the construction process shouldn’t hold too many surprises. The hind legs employ tried-and-tested A-plate pieces (which are also used effectively in angling the main body), while the front legs combine curved corner plates and wedge plates – and though neither approach incorporates knee articulation (understandably, given the weight they have to bear), the variety between the two is welcome in both build and display.

71746 Jungle Dragon isn’t absent detail, either, making smart use of both stickers and the LEGO Group’s broad palette of textured and smooth tiles and slopes to create a striking statement piece. A lot of that is down to the teal, pure and simple, but it’s also communicated through the character imbued into its moulded head.

There’s a time and a place for the brick-built heads found across several of the NINJAGO theme’s dragons – the particularly intricate noggin sported by last year’s 71721 Skull Sorcerer’s Dragon springs to mind – but this definitely isn’t one of them.

Injecting the same amount of personality into an entirely brick-built head at this scale would have been no small feat, and there’s still plenty of building to be done around those larger elements to justify their inclusion. In fact, while the printing does a lot of the heavy lifting in getting across just how wild this beast is, it’s actually that huge, red tongue that seals it.

Between its head and comparatively small wings – they’re basically just huge blades – it’s also clear that plenty of thought has gone into the ‘jungle’ aspect of 71746 Jungle Dragon. This is an animal that feels right at home next to the wider line-up of Season 14’s The Island sets, dressed up in that wild, primitive aesthetic that defines this entire range.

You can just imagine it charging through the jungle, aided by the generous articulation in its legs, head and tail (even if the body is static). Or, if you have the pieces, build that tropical display around it – and when a LEGO set encourages you to go above and beyond what’s in the box, you know you’re on to a winner.

You’ll find four minifigures in the box, with a very welcome even split between heroes and villains. Our ninja are Island Lloyd and Island Zane, the latter of whom rides a surprisingly detailed and super swooshable windsurfer alongside Lloyd’s dragon.

While Zane bears the same impressive torso and leg printing found across the entire set of Island ninja, it’s Lloyd who comes out on top, successfully combining the LEGO Group’s various shades of green with an incredible dual-moulded hairpiece and a fun ‘war paint’ face print.

Only one of the minifigures here is actually unique to 71746 Jungle Dragon, however, and that’s the double-headed antagonist PoulErik. The bandana element sandwiched between his two bonces actually feels counter-intuitive in practice, hampering the limited clutch power normally afforded by stacking minifigure heads, but it does look pretty cool.

The Thunder Keeper pops up in two other sets in this wave, but he’s generic enough that you really won’t mind. (Plus, his Islanders-style mask is a great piece to stock up on.)

71746 Jungle Dragon will set you back just £34.99 / $39.99 / €39.99, and for that price you won’t find much to complain about. Between its 506 pieces and four highly-detailed minifigures – and the play and display value the entire package brings to the table – the value proposition is right in that sweet spot that you shouldn’t need to wait for one of Amazon’s increasingly-rare 33% markdowns.

With a huge and ever-growing slate of Creator Expert, Ideas and Ultimate Collector Series Star Wars sets to dive into – along with everything else encompassed by the new 18+ branding – it’s really no surprise that many adult fans of LEGO write NINJAGO off as a kids-first play theme (at least beyond the likes of 71741 NINJAGO City Gardens).

But as 71746 Jungle Dragon and 71747 The Keepers’ Village prove, it really deserves more of your attention these days. And that’s especially true if you’re on a budget, because next to the behemoths that are 21322 Pirates of Barracuda Bay and 75192 Millennium Falcon, 71746 Jungle Dragon is testament to the quality the LEGO Group is still capable of at a sub-£40 price tag.

How long does it take to build 71746 Jungle Dragon?

71746 Jungle Dragon flies together in roughly 35 minutes, which is pretty ironic given this dragon’s wings suggest it wouldn’t be much good in the air.

You’ll need a shelf 17cm deep and 30cm wide to display the Jungle Dragon, with at least 15cm of clearance on the vertical axis (though you’ll probably want a little more to give it the attention it deserves).