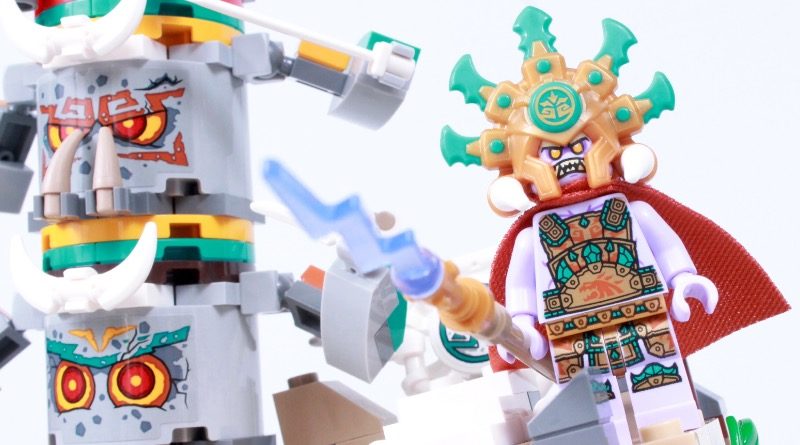 It’s not the largest in the latest wave of LEGO NINJAGO sets, but 71747 The Keepers’ Village may just be the most essential.

The NINJAGO crew are heading to a mysterious island for Season 14, and while 71748 Catamaran Sea Battle (review) fills the top price tier for this wave, the centrepiece is arguably 71747 The Keepers’ Village.

Priced perfectly to give us just a flavour of the aesthetic and establish the setting for the rest of this subtheme, the playset effectively anchors the entire wave of sets with a colourful and engaging build, surprising detail and a great cast of minifigures.

The age range on the box of 71747 The Keepers’ Village is 8+, so you shouldn’t go in expecting anything too involved – but if you can keep those expectations in check, you might just be surprised by what this set can offer the more experienced builder.

Things start simple, layering plates to build up the beach terrain, before adding vegetation and a classic skeleton head (the first hint at this model’s ability to play into your nostalgia). The functions baked into this area of the build – a hidden tile shooter and a toppling tree – are just fine, but it’s really the detail that emerges almost instantly that you’ll be most impressed by, as the set opens into a sprawling and eye-catching display.

That’s partly through a careful use of colour to communicate the tropical aesthetic, but also in the specific part usage that brings this entire scene to life. At almost every corner of 71747 The Keepers’ Village, the design team has gone above and beyond previous location-based sets to make intelligent use of all 632 pieces – whether in the foliage that rises along with the A-frame stairs, the weapons and tools littered around the village or the rockwork that comprises the cave and its adjacent carved creature.

The left-most section of this model is probably where you’ll have the most fun during the build, as there’s a surprising amount of character imbued into what’s essentially an inanimate object. Behind the intricate dragon mouth carving – which is itself brought to life with smart use of trans-orange elements – lies a prison cell, accessed by admittedly only the smallest of fingers, but it’s still a clever use of limited space that might otherwise have been wasted.

The horizontal space occupied by the two sections to this set – it splits between the beach and stairs, with the connecting clips carefully concealed behind foliage – unfolds quickly, but you’ll have to wait until the very last stages for it to match that ambitiously wide scope along the vertical axis.

And while the towering totem pole that sits adjacent to the chief’s throne is an unavoidably repetitive build, the trio of stone golems demand your attention just as much as the designers very clearly intended them to, each one armed and ready to act as a collective third antagonist to our heroes.

By the time you’re done, you’ll be left with a model that’s maybe something of a misnomer: ‘village’ conjures up images of a rural environment populated by dwellings, but 71747 The Keepers’ Village instead aims for traditional playset trappings like a prison cell and hidden functions. But that’s no bad thing, because it provides the perfect starting point for either storytelling with its characters or building it out into a wider display.

Of course, it also helps that – like 71748 Catamaran Sea Battle and the rest of this subtheme – 71747 The Keepers’ Village is wrapped up in an aesthetic that evokes the classic Pirates subtheme Islanders. For veteran LEGO fans, that’s a welcome shot of nostalgia; and even if you weren’t on the scene in the ‘90s, you’ll still appreciate the LEGO Group revisiting the eclectic and vibrant mix of imagery and colour that typified that short-lived range.

The comparison isn’t entirely positive, however: Islanders is uncomfortable material for the modern day, given its stereotypical depiction of primitive indigenous tribes. Casting the Keepers as antagonists in this range feels like leaning into the wrong side of that classic line, but that’s perhaps a discussion for another day.

If you can get past the LEGO Group’s inability to stay woke for more than two minutes, you’ll find five hugely impressive minifigures in 71747 The Keepers’ Village. Only one of those is exclusive to this model, and while he’s not quite worth the entry price alone, Island Cole doesn’t need to be – there’s definitely enough here to justify picking the set up regardless, and the ninja simply sweetens the deal.

These island variants of our heroes are some of the best NINJAGO minifigures we’ve seen to date, from the detail of their dual-moulded hairpieces to the insanely intricate torsos and legs. That sentiment carries through to Chief Mammatus, who is otherwise only available in 71748 Catamaran Sea Battle, and the Thunder Keeper, who also pops up in that set and 71746 Jungle Dragon.

As in the largest set of this wave, though, an extra antagonist to fend off wouldn’t have gone amiss – simply to balance out the fight in this instance – although as mentioned further up, there’s an argument to be made for the stone golems filling that role.

Five new and detailed minifigures, 632 pieces and an impressive build that stretches both wide and tall would be a pretty tempting package at even £54.99, so the fact that 71747 The Keepers’ Village comes in at just £44.99 / $49.99 / €49.99 should see it rise up your wish list without needing to wait for a discount.

Across any given LEGO NINJAGO wave – or really any wave of complementary LEGO sets – it’s often the biggest, most expensive model that comes out on top, simply by virtue of boasting the budget needed to really deliver the detail and design expected of the very best LEGO sets. (See last year’s 71722 Skull Sorcerer’s Dungeons, 2018’s 70643 Temple of Resurrection, etc.)

71747 The Keepers’ Village bucks that trend by emerging with style and confidence as the must-have model from NINJAGO’s 14th season, providing an eclectic line-up of characters with which to populate an engaging and entertaining set that works equally well in play or on display.

How long does it take to build 71747 The Keepers’ Village?

You’ll spend roughly an hour putting together 71747 The Keepers’ Village. It’s pretty straightforward, but don’t mistake that descriptor for ‘dull’, because boring it ain’t.

How many pieces are in 71747 The Keepers’ Village?

At full tilt, 71747 The Keepers’ Village measures more than 29cm wide, 22cm tall and 19cm long, so you’re going to need a pretty expansive shelf to display it. Trust us, though, when we say you’ll want to.