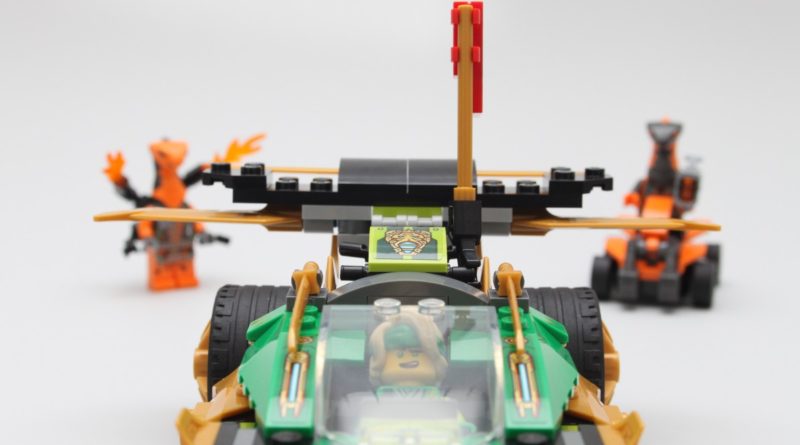 LEGO NINJAGO races into 2022 with a new and evolving vehicle for Lloyd, but will the transforming feature be the downfall of 71763 Lloyd’s Race Car EVO?

NINJAGO’s new Core wave has determined that race cars are part of the overall identity for the theme, with 71763 Lloyd’s Race Car being one of two four-wheeled vehicles in the early 2022 line-up.

Focusing on an open-concept design, the green variant demonstrates the evolving function that features heavily throughout the latest range.

The overall shape and design of 71763 Lloyd’s Race Car EVO strongly resembles 70641 Ninja Nightcrawler from 2018, which will likely draw a few comparisons between the two models. However, the pair differ more than you might expect. The newer model skews towards a younger audience than its predecessor, so the build is a lot simpler, with inspiration seemingly drawn from a Formula One car – at least in the final form.

Like many of the models in the NINJAGO Core range, the green car has three variants depending on the terrain and which upgrades Lloyd wishes to equip. These range from the lightweight, bare stage to the last feature-filled step, complete with banner, spoiler and added armour.

The option to add or remove the sections in whatever combination you wish allows you to customise the creation to suit your preference or needs, whether you’ll be taking Lloyd on an off-road adventure or a day on the racetrack.

The final form of 71763 Lloyd’s Race Car EVO is probably the one you’ll go with for display, though, and it hosts an abundance of blades and gold elements to protect or support the vehicle and the driver.

Battling against the green ninja’s vehicle are two snakes, one of which can ride a brick-built quad bike. The side build is sparsely detailed, with a jet of flame emitting from the rear and a pair of protective guards at the front.

An exclusive sticker is included for various controls and dials, which minifigures may only be able to operate with their feet while on the move. It stands as another example of an unfair fight for the villains of NINJAGO, though still offers an opportunity for play, which should go down well with the younger target audience.

Three minifigures are included, with the only ninja being Lloyd. Unlike the rest of the team, Lloyd’s element of energy is not as obviously represented in his 2021 outfit, which incorporates draconic scales – leaning into the ambiguous nature of the element of energy.

Both a mask and a hair element are included, meaning those who are new to the theme will not need to search for the specialised element in other models, which helps to maintain the set’s aim of being appealing to NINJAGO newcomers.

The two snake minifigures are very similar to the other enemies present in the rest of the LEGO NINJAGO 2022 sets, though differ in terms of their included accessories and weapons, as well as one using the shorter legs. The smaller character’s handheld blaster is new for 2021 and looks suitably sleek, firing off a single brick without obviously showing the piece like the former stud-shooter design did.

LEGO NINJAGO 71763 Lloyd’s Race Car EVO retails for £24.99 / $29.99 / €29.99, but with everything included, it feels like it should cost more. While not overly generous in terms of its contents, this NINJAGO 2022 build is well worth the asking price with three minifigures and 279 pieces, thanks to the wealth of customisable sections that can be added to the main vehicle.

Compared to the rest of the NINJAGO Core 6+ models, 71763 Lloyd’s Race Car EVO is an excellent deal for those who have yet to add an action-packed car to their NINJAGO collection. However, it doesn’t really offer enough new content for anyone who has become all too familiar with the theme over the past decade.

However, even the most familiar of fans should take a close look at the set before deciding it isn’t for them, as the customisable model offers plenty of options for play, as well as an exciting take on an older concept for those who know and love NINJAGO.

So while there’s nothing new or especially desirable in 71763 Lloyd’s Race Car EVO, the simplicity of the building experience – combined with the various forms that can be reconfigured from it – make it one to keep an eye on before it eventually retires. Like many of the 6+ models in NINJAGO Core, this set successfully fulfils its goal of appealing to a younger, unfamiliar audience as an introduction to the theme.

How long does it take to build LEGO NINJAGO 71763 Lloyd’s Race Car EVO?

The main and side models featured in 71763 Lloyd’s Race Car EVO will take you around 35 minutes to finish, or slightly longer for those new to LEGO.

How many pieces are in LEGO NINJAGO 71763 Lloyd’s Race Car EVO?

How much does LEGO NINJAGO 71763 Lloyd’s Race Car EVO cost? 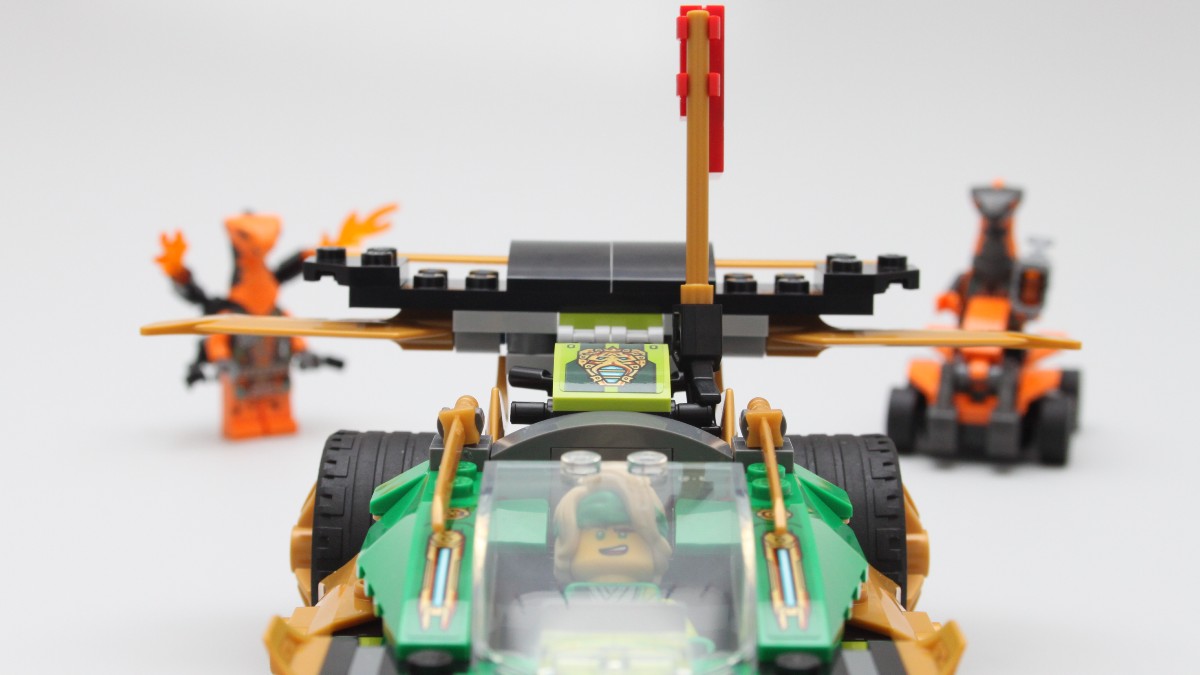