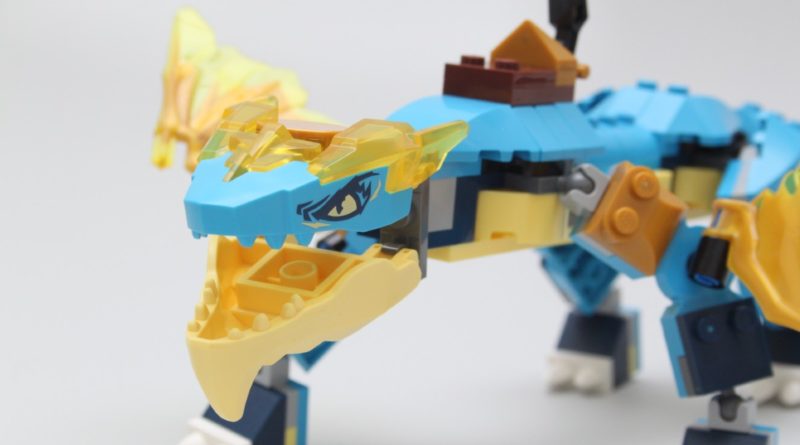 LEGO NINJAGO evolves its core line in 2022 with a range of 6+ sets for younger fans, but can 71760 Jay’s Thunder Dragon EVO still impress?

The LEGO NINJAGO Core wave is aiming to introduce a new intermediate line of models for those in-between the 4+ and 8+ levels of building skills, meaning a mix between detailed creations and a relatively easy construction experience.

One of the sets headlining this concept is 71760 Jay’s Thunder Dragon EVO, which also integrates an upgrading function. The only question now is how well does this dragon perform when put to the test?

The only model featured in 71760 Jay’s Thunder Dragon Evo is the creature itself. Fitting with the EVO title in the name, this dragon can evolve depending on your preference, with added parts that increase its size and capabilities.

At its first stage, the Thunder Dragon features four poseable legs using the new System Character and Creature Building System (SCCBS, as coined by designer Niek van Slagmaat), a short tail and a body, using a combination of the new neon yellow bricks and two shades of blue – matching the electric colour scheme of the lightning ninja Jay.

At the head of the model, two specialised pieces are used to represent the elemental power of the beast, which in this initial stage is the only part of the body to feature lightning. The top part is exclusive to 71760 Jay’s Thunder Dragon EVO and adds appeal to the set, with a simplistic design reminiscent of those in the How to Train Your Dragon franchise.

Moving on to the next evolution of the dragon, the body is lengthened with two sections and lightning is added to the end of the tail. The dragon also gains a pair of wings attached to a connection point on the front pair of legs.

The new wings have limited posing options, but the fresh bricks feature dual-moulding with a striking yellow and gold colour. The printed banner element is also added with a saddle. Each of these sections helps to make the dragon feel more impressive as the build progresses, while offering flexibility over how far you evolve the dragon.

Only two minifigures come with 71760 Jay’s Thunder Dragon EVO, including – you guessed it – Jay and one of the two enemy snakes that feature in all of the NINJAGO Core sets.

Jay is depicted as wearing his new 2022 outfit, with a lightning design on his left stretching on to the arm, which is coloured neon yellow. The new hue appears again on the mask and sword, working well with the lightning element and not distracting from the yellow skin of the character. A hair piece and mask are also included, increasing the customisation options.

The Viper Flyer is identical to every other orange-headed snake minifigure that appears in the 2022 NINJAGO Core sets, with these villains designed to be purposefully generic to appeal to a wider market. The only remarkable element that makes this minifigure stand out from the rest of the NINJAGO Core snake villains is the neck attachment, which features a glider made up of four wings to keep up with the lightning dragon.

The overall detail on the minifigure is good with a mix of orange, grey and blue used to give off the sense of rust and oxidisation, keeping with the technological theme of this serpentine group, though it won’t be a deciding factor for anyone thinking of buying 71760 Jay’s Thunder Dragon EVO.

The price of 71760 Jay’s Thunder Dragon EVO at £17.99 / $19.99 / €19.99 feels somewhat fair considering the size of the included model, but in terms of the price-per-part ratio, the value is less than you might expect – especially considering that only a few specialised elements are included.

Older collectors will likely be unimpressed by the contents of the model at the asking price, though the intended, younger audience may not see a problem. We’d have appreciated another minifigure or an extra pair of wings, but the cost doesn’t feel unfair despite this.

71760 Jay’s Thunder Dragon EVO is not necessarily lacking in any particular aspect, but still feels unremarkable, and will likely not be in consideration at launch for NINJAGO veterans. However, those fans aren’t the intended market for this set: the 2022 wave also includes a larger, more complicated dragon model for older fans to enjoy, which you can read all about in our review.

For younger hands, 71760 Jay’s Thunder Dragon EVO serves as a perfect introduction to NINJAGO (or indeed, a continuation of previous 4+ sets for builders moving beyond that age mark). The dragon is poseable, colourful and features an interesting upgrading feature that provides rebuilding opportunities.

In short, it will be most appealing to its target audience, though may find its way into the collections of older fans thanks to the simplistic but appealing design. It’s not one to place at the top of your shopping list come January, but has good aspects that may make it one to look out for later in the year.

How long does it take to build LEGO NINJAGO 71760 Jay’s Thunder Dragon EVO?

How many pieces are in LEGO NINJAGO 71760 Jay’s Thunder Dragon EVO?

71760 Jay’s Thunder Dragon EVO won’t take up much space, measuring around 32cm long – and even shorter if you switch it to the wingless stage.

How much does 71760 Jay’s Thunder Dragon EVO cost?