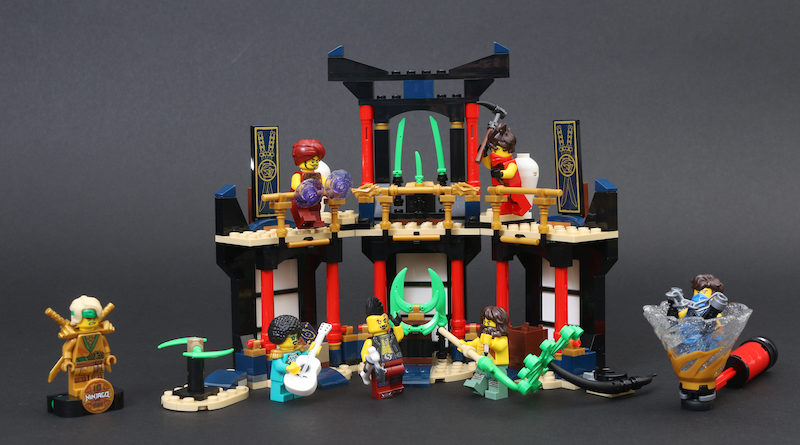 Taking everything that worked about an older model, 71735 Tournament of Elements packs in extra minifigures for this LEGO NINJAGO Legacy set.

Based on 2015’s 70756 Dojo Showdown comes 71735 Tournament of Elements, complete with an almost entirely new roster of minifigures straight out of Season 4 of the NINJAGO television show.

Set within Anacondrai Master Chen’s palace, the older 70756 Dojo Showdown was based around a Season 4 episode where Kai must face off with Karlof for a Jadeblade. Apparently based on that set, 2021’s 71735 Tournament of Elements includes a similar set-up, but curiously minus Karlof.

The new version of the scene comes in at 68 pieces more and with an additional three minifigures.

With seven minifigures included in this set, primary focus is likely not to centre on what is essentially a backdrop to a world of ninja fights. That being said, it offers a decent multi-section layout across two levels and certainly something suitably different to what was on offer in 2015’s 70756 Dojo Showdown.

It’s not necessarily better, mind, as that original version included a beefier display with more of an obstacle course for the minifigures to better interact with. In that regard, 2021’s 71735 Tournament of Elements does fall short, instead offering just the two-tier platform for standing on.

It’s certainly the result of a budgetary compromise so as to include such a large line-up of minifigures, but it’s not without merit, packing a couple of nice surprises within its build, including at least some smaller items of interactivity for the minifigures. (And kudos for the stick that makes the ninja spinner actually spin.)

Cynically or not, 71735 Tournament of Elements is all about the minifigures, given the impressive quantity of seven that are included. Where the model within the set is the backdrop, these guys are the forefront of the action, play and display, and their designs all live up to the standards you’d expect.

Most eye-catching are the exclusive inclusions of Elemental Masters Gravis, Bolobo and Jacob Pevsner. Their designs are maybe more inspired by rather than necessarily based on how they looked in the show, but they make for a fantastic trio to add to what for many will already be an extensive NINJAGO minifigure collection.

This Golden Lloyd is also exclusive, as part of the Golden NINJAGO minifigure collection that can be completed by picking up each of the Legacy sets being released in January 2021. As mentioned in the other NINJAGO Legacy set reviews, the real appeal to such a minifigure is in its collectability and completion, whether that’s good or bad.

Kai, Jay and Eyezor aren’t exclusive, but add the necessary playability and conflict that including heroes and villains in such a set will do. As a complete line-up of seven, there’s a great mix of character, expression, colour and play to be enjoyed.

Whilst based on 70756 Dojo Showdown, 71735 Tournament of Elements feels more comparable to 2020’s 71708 Gamer’s Market, a set that was also primarily centred around a large collection of minifigures within it. That set was priced the same as this one and came with nine minifigures in total, compared with 71735’s seven. 71735 makes up for that with the larger backdrop, to try to pull the characters back into their world a bit more effectively.

For the minifigure-hungry LEGO fans, these sorts of sets pack great value. For those looking for any sort of real building and/or set interactivity to go alongside that, there’s not enough to justify the price.

71735 Tournament of Elements is all about the minifigures and there’s no hiding from that. The model that you build is a simple but effective backdrop, designed for minimal interactivity. It looks great but knows its place among a gang of colourful minifigures, some of which are highly desirable and all of which are excellently detailed in design and perfectly at home within the confines of this conflict-driven set.

Seven minifigures and a medium-sized backdrop for £24.99 represents great value, play and collectability for the minifigure-centric among us. For the rest, it’s got merit – but perhaps when at a slightly reduced price.

LEGO NINJAGO Legacy 71735 Tournament of Elements is available at LEGO.com from January 1, 2021 – support the work that Brick Fanatics does by purchasing your LEGO through one of our affiliate links.