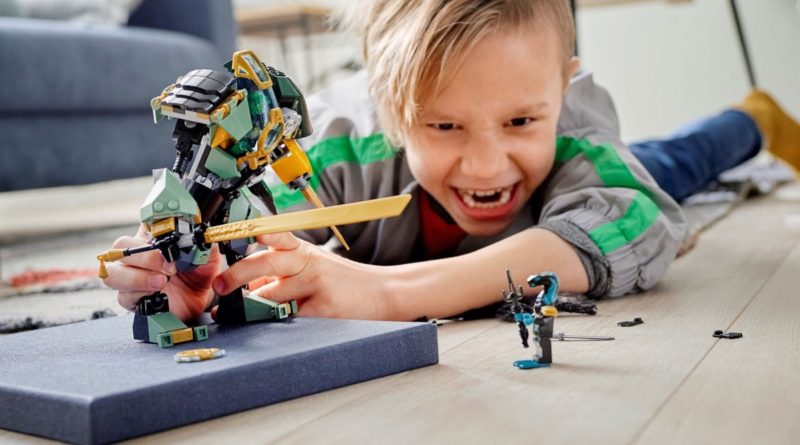 The newly-released LEGO NINJAGO 71750 Lloyd’s Hydro Mech was originally twice the size of the finished set – and a completely different colour.

That’s because the entry-level product of this summer’s Seabound wave was initially intended to belong to Kai rather than Lloyd, and was therefore red rather than green – at least according to designer Niek van Slagmaat, who revealed the history behind 71750 Lloyd’s Hydro Mech to Brick Fanatics during this year’s LEGO Fan Media event.

“When I made the very first sketch model, it was Kai’s mech, and it was $40,” Niek says. “So it was quite a bit bigger, and it was red, and looked a lot more like a crab. But because our Seabound sets are all skewed quite high in price – we have the $100 71755 Temple of the Endless Sea and $130 71756 Hydro Bounty – we wanted to make sure that the [cheaper sets] were actually at a lower price point.

“We swapped it to a $20 set instead, and for story reasons, we swapped it to being Lloyd instead of Kai’s mech. And because we did that, I basically had to make the model from scratch, because there was very little overlap there.”

There was another factor at play in reworking the model, though: scaling back the price tag (and subsequently, the size) also meant scaling back the complexity of the build, in order to make the set more accessible to a broader and younger audience.

“Larger sets tend to have higher price points and higher age marks as well,” Niek explains. “If we have a lower price point, we always try to also make it a lower age mark, to give younger kids an entry into NINJAGO, and especially into the current storyline of NINJAGO.

“So when we decided on the $20 set, we also decided to make it 7+ instead, which actually makes pretty drastic changes to the way that it’s allowed to be built for those kids. That’s both in the actual build but also in the pieces that we’re allowed to use, because some pieces are much harder to recognise for seven-year-olds than they are for eight-year-olds, so there’s a lot of challenges there in the way that it was built.”

That’s not to say that nothing from the original sketch model survived in 71750 Lloyd’s Hydro Mech, though. While the core build and colours may have changed from that original Kai-themed mech, the spirit of the crab-like design was consistent all the way through – even in switching to Lloyd’s mix of greens.

“The main thing that we wanted to keep was the underwater aesthetic, of course,” Niek says. “We also always wanted it to be asymmetrical, because crabs often have one larger claw than the other. I combined that with one of my favourite tropes in swordfighting character design: the left arm is heavily armoured to withstand blows when you turn to face your foe, whereas the other arm is lighter because it needs to carry the force and the speed of the sword when you’re fighting.

“I think that combination of things, along with a Kendo aesthetic with the skirt, all came together to form a very weird amalgamation of a lot of different ideas, but I’m actually very happy with how it turned out.”

71750 Lloyd’s Hydro Mech is available to order from LEGO.com right now, alongside the rest of the NINJAGO Seabound wave.

Consider supporting the work that Brick Fanatics does – like bringing you these exclusive insights – by purchasing your NINJAGO sets using our affiliate links. Thank you!