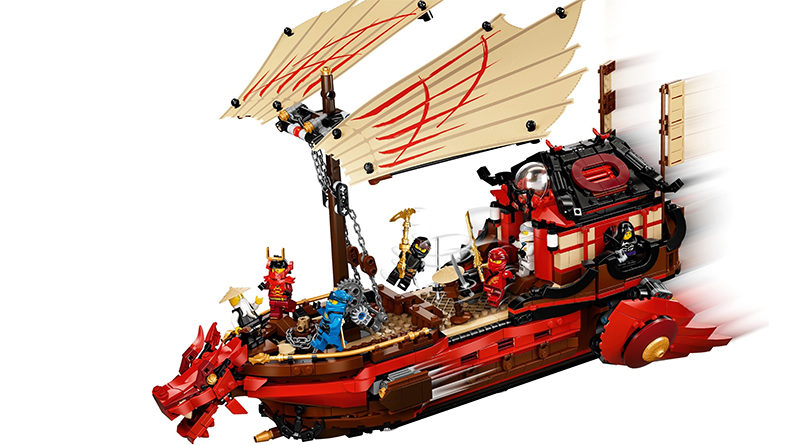 A new wave of LEGO NINJAGO sets has launched today at the official LEGO online shop.

LEGO NINJAGO is back today, with entirely new sets based on a new storyline and sets based on classic stories in Legacy. Some of the sets include pieces and a poster to adapt the models into a board game.

Here are the 11 new LEGO NINJAGO sets that are available now:

Kids can recreate thrilling scenes from early seasons of the Masters of Spinjitzu TV series with this updated LEGO NINJAGO Legacy set. Storm Fighter Battle (71703) features 3 minifigures, a toy jet, a toy car and a NINJAGO temple with a jail. This ninja battle set will provide imaginative kids with hours of creative fun.

LEGO NINJAGO 4+ toys help preschool kids learn to build their favorite characters, vehicles and buildings. With Starter Brick bases to make the process simpler, these sets are specially designed so first-time builders can experience the pride of constructing all on their own.

Ninja fans who love creating iconic LEGO NINJAGO Legacy playsets and have a passion for playing with fun toys and buildable figures will be enthralled by the Kai Fighter (71704). This stunning building set for kids features a toy jet and 2 ninja and 2 Nindroid Warrior action figures.

Celebrate the famous history of NINJAGO by building this cool LEGO NINJAGO Legacy set, a modern and upgraded action toy from season 3 of the TV series. Kids will enjoy the fun challenge of putting it together from building bricks before staging epic ninja battles between Kai and Lloyd and the Overlord’s Nindroid Warriors.

Little ninjas can enjoy plotting their own NINJAGO epic adventures with this action-packed and interactive ninja playset, an updated version of the NINJAGO boat from season 1 of the TV series. Kids will love firing up their imaginations with this NINJAGO Destiny’s Bounty set.

71717 Journey to the Skull Dungeons

Kids can recreate thrilling scenes from the NINJAGO TV series with this Journey to the Skull Dungeons (71717) playset. With 4 minifigures, including Hero Nya, Hero Jay, Hero Lloyd and Murt, creative youngsters can plot their own dungeon adventures.

This super-cool building set for kids also doubles as a LEGO NINJAGO board game. Youngsters can use the dice spinner to plot their way through the dungeon as they attempt to avoid the ninja traps, spiders and prison guard Murt before they can grasp the Shadow Blade of Deliverance and free one of the ninjas from prison. It can also be combined with other LEGO sets to create a giant board game.

This LEGO NINJAGO Wu’s Battle Dragon (71718) building set for kids with 2 minifigures will be adored by fans of ninja toys, who can use it to stage their own fantasy stories from the NINJAGO TV series. The awesome posable dragon can move its wings, tail, feet and head.

With 2 buildable figures of Hero Wu and Gleck, ninja fans can immerse themselves in the mysterious Dungeons of Shintaro and play out battles between themselves for the Ivory Blade of Deliverance. Wu can ride his flying dragon, which will enchant youngsters’ creative minds.

This LEGO NINJAGO Fire Stone Mech (71720) with 5 minifigures is perfect for fans of ninja toys and building sets for kids. Youngsters will love putting together the fire ninja mech and figures to play out action-packed scenes from the NINJAGO TV series.

This stunning and detailed LEGO mech set offers kids a world of possibilities so they can enjoy hours of engrossing action. They can place two ninjas in the cockpit of the highly posable mech as it storms into battle against enemies Murt and Moe, smashing its way out from the bowels of Shintaro Mountain.

NINJAGO fans can build and play with the Skull Sorcerer’s Dragon (71721). This dragon building kit features 6 buildable figures for captivating creative play. Kids will be able to enjoy role-play action as the ninjas battle the Skull Sorcerer, his dragon and his skeleton warriors, to free themselves from the spooky Dungeons of Shintaro.

This dragon building set also doubles as a LEGO NINJAGO board game boasting a ninja dice spinner and an assault course with a trap for the ninjas to navigate. Kids spin the dice and plot their way through the game to grasp the prized Ivory Blade of Deliverance. It can also be combined with other LEGO sets to create a giant board game.

This building set for kids also acts as a thrilling NINJAGO board game. Ninja fans use the dice spinner to plot their way through the dungeons, avoiding traps, lava, moving bridges and the Skull Sorcerer’s warriors as they seek to grasp the Shadow Blade of Deliverance and free a ninja from prison. It can also be combined with other LEGO sets to create a giant board game.

This awesome NINJAGO Spinjitzu Burst – Cole (70685) accessory set allows youngsters to enjoy countless hours of creative play as they learn to become Spinjitzu masters. Kids can role-play exciting scenes with the LEGO NINJAGO Spinjitzu building kit on their own or with friends.

Stunning LEGO Spinjitzu Burst-Kai (70686) set allows kids to indulge in hours of creative play as they help Kai Burst become a Spinjitzu master. A world of possibilities is on offer to ninja fans as they stage action-packed scenes with this LEGO NINJAGO Spinjitzu building kit.

This Spinjitzu Burst-Lloyd set (70687) with 1 figure is perfect for little ninjas who love role-play toys and building kits. This innovative ninja toy offers a world of exciting play possibilities to recreate exciting scenes and train NINJAGO Lloyd to be a Spinjitzu master.