The panels are focused on the TV shows, video games and movies that are released alongside the LEGO play themes. Highlights for 2017 include panels discussing Unikitty, the new TV series that stars The LEGO Movie’s pinkest character, The LEGO NINJAGO Movie, looking at the upcoming movie (the TV series also gets a panel) and LEGO Marvel Super Heroes 2, going behind the scenes of the new video game. Screenings of the new straight-to-home features LEGO Scooby-Doo! Blowout Beach Bash and LEGO DC Super Hero Girls: Brain Drain round out the programming.

Here is the full list of LEGO panels and screenings published on the San Diego Comic Con website:

The Future is Female: Women in Animation

Your favorite character from The LEGO Movie now has her own show! Journey to a joyous kingdom full of sparkle matter, happy thoughts, and the occasional rage-out in Unikitty!, an all-new animated series. As ruler of the kingdom, Unikitty has busy days full of royal responsibilities. Unikitty is most interested in making sure everyone is happy and ridding the kingdom of negativity, but don’t misunderstand her optimism-she is one kitty not to be crossed. While she may be full of boundless energy and creativity, Unikitty is a force to be reckoned with if anyone gets in the way of spreading her positive vibes, especially if anyone makes her little brother and best friend, Puppycorn, sad. Also living in the castle are Dr. Fox, the resident scientist, and Unikitty’s trusty bodyguard, Hawkodile. Producers and members of the voice cast will give a sneak peek at this new series and explain how Unikitty and her friends will make sure that every day is the happiest and most creative ever! Produced by Warner Bros. Animation, Unikitty! is coming soon to Cartoon Network.

In this big screen Ninjago adventure, the battle for Ninjago City calls to action young Master Builder Lloyd, a.k.a. the Green Ninja (Dave Franco), along with his friends, who are all secret ninja warriors. Led by Master Wu (Jackie Chan), as wise-cracking as he is wise, they must defeat evil warlord Garmadon (Justin Theroux), the Worst Guy Ever, who also happens to be Lloyd’s dad. Pitting mech against mech and father against son, the epic showdown will test this fierce but undisciplined team of modern-day ninjas who must learn to check their egos and pull together to unleash their inner power of Spinjitzu.

Mystery, Inc. heads to Blowout Beach for a real swinging beach party, but when the Ghost Pirates threaten to crush the good vibes, it’s up to Scooby-Doo, Shaggy, Fred, Daphne, and Velma to get the party back on track and save the day! Be among the first to see this all-new LEGO/Scooby-Doo movie, then stay for a fun-filled panel featuring actors Matthew Lillard (Twin Peaks, The Bridge) and Grey Griffin (The Grim Adventures of Billy & Mandy), the voices of Shaggy and Daphne respectively, alongside producer Rick Morales and director Ethan Spaulding. TV Guide Magazine senior writer Damian Holbrook will moderate the hijinks. LEGO Scooby-Doo! Blowout Beach Bash will be available on July 25, 2017 on DVD from Warner Bros. Home Entertainment.

Join creators of the smash-hit Ninjago: Masters of Spinjitzu television series and LEGO Ninjago toys for an in-depth look behind the scenes. Writers Kevin and Dan Hageman, showrunner Tommy Andreasen, senior creative director Simon Lucas, and IP lead Nelson Lamonica go under the hood and explore the Ninjago universe. Plus, sneak peeks and an appearance from voice talent of the hit show. Moderated by Brian Bowler (marketing director). 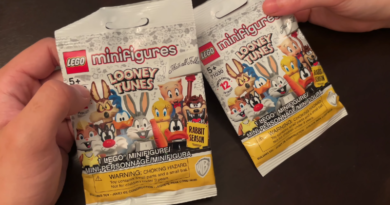 The world of LEGO Collectible Minifigures is set to expand with a series based on the . . .

END_OF_DOCUMENT_TOKEN_TO_BE_REPLACED 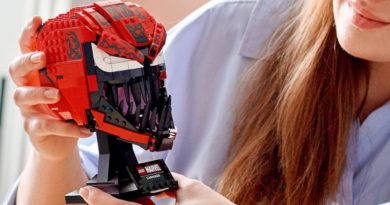 If you can’t wait until the launch of the latest LEGO Marvel helmet, then the first . . .

END_OF_DOCUMENT_TOKEN_TO_BE_REPLACED

Author and screenwriter Emma Kennedy returns with what might be the ultimate LEGO quandary: should you . . .

END_OF_DOCUMENT_TOKEN_TO_BE_REPLACED

With so few new parts and a price hike that doesn’t justify the plastic, VIDIYO’s first . . .

END_OF_DOCUMENT_TOKEN_TO_BE_REPLACED

The LEGO Group may be gearing up to offer double VIP points through its online and . . .

END_OF_DOCUMENT_TOKEN_TO_BE_REPLACED

The LEGO Marvel theme has seen some incredible sets released alongside the movies – but now . . .

END_OF_DOCUMENT_TOKEN_TO_BE_REPLACED

The first review of LEGO Marvel 76187 Venom is already online, more than two weeks ahead . . .

END_OF_DOCUMENT_TOKEN_TO_BE_REPLACED

LEGO Creator Expert 10264 Corner Garage – reportedly the next modular building to retire – is back . . .