When the LEGO Overwatch line was first announced, as a long-time player I was intrigued to see how the LEGO Group would choose to translate a world I had come to know well into brick form. Would it stick solely to the in-game universe, or would it delve into the deeper lore of the animated shorts and graphic novels surrounding it that have brought Overwatch to vivid life for its devotees?

With the first reveal of these upcoming sets we get a clearer picture, with expected minifigures alongside a mixture of payloads (that is, items to be escorted across a level while the other team tries to stop it) and snapshots of individual maps. 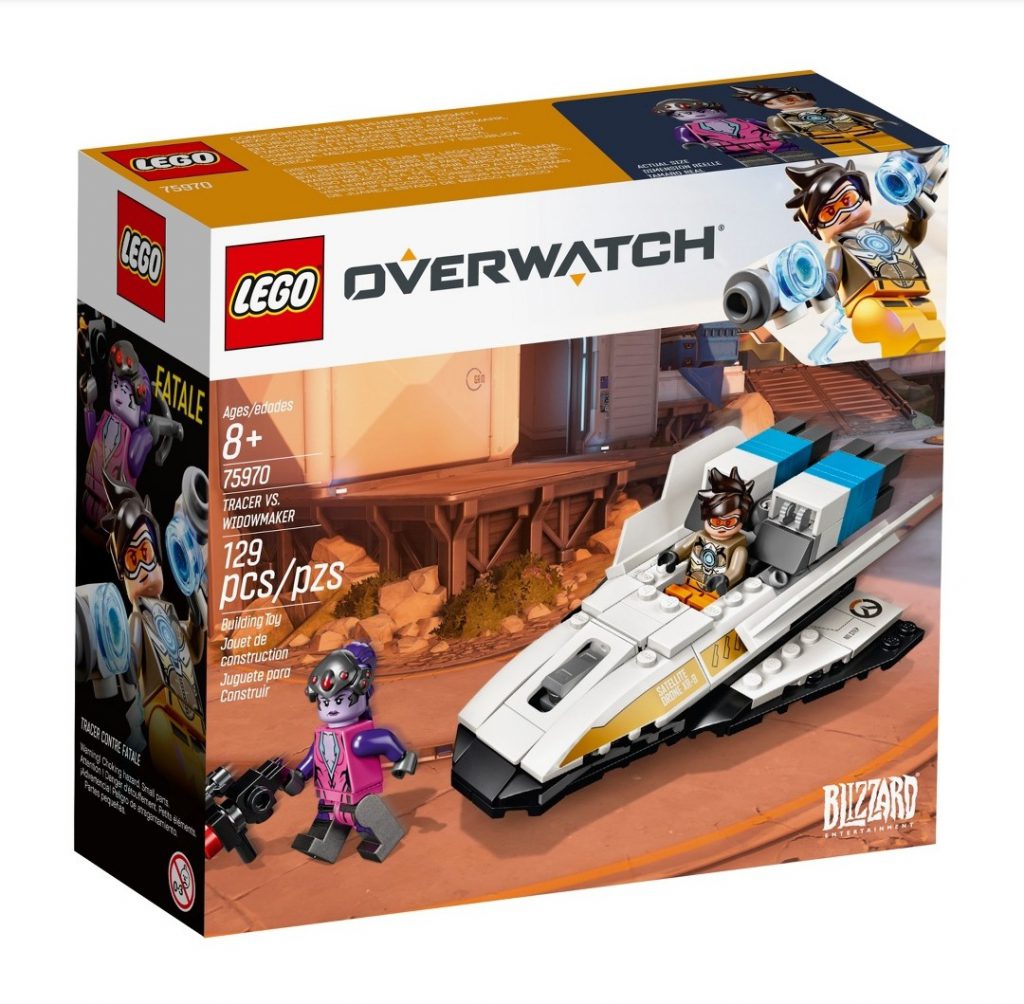 75970 Tracer vs. Widowmaker will be a must-have for fans of these OG heroes. Tracer has been the face of Overwatch since the very first teaser trailer for the game introduced the cockney time-traveller. The cover star and cosplay staple’s spiky ‘do and twin pistols are present and correct amongst a plethora of printed details. French femme-fatale assassin Widowmaker probably has the best-looking weapon of the minifigure-scale characters, in the form of a sleek sniper rifle. The image on the back of the box suggests she may also come with a grappling hook, but this is unclear.

The drone/satellite payload from the Watchpoint: Gibraltar map looks fine, which is okay given that it is probably one of the less narratively interesting objectives in the game. Personally, I would have preferred to see the duo packaged with the payload from the King’s Row map – the London setting for a thrilling rooftop chase between the two seen in an early short, and perhaps a more fitting nod to the pair’s history. 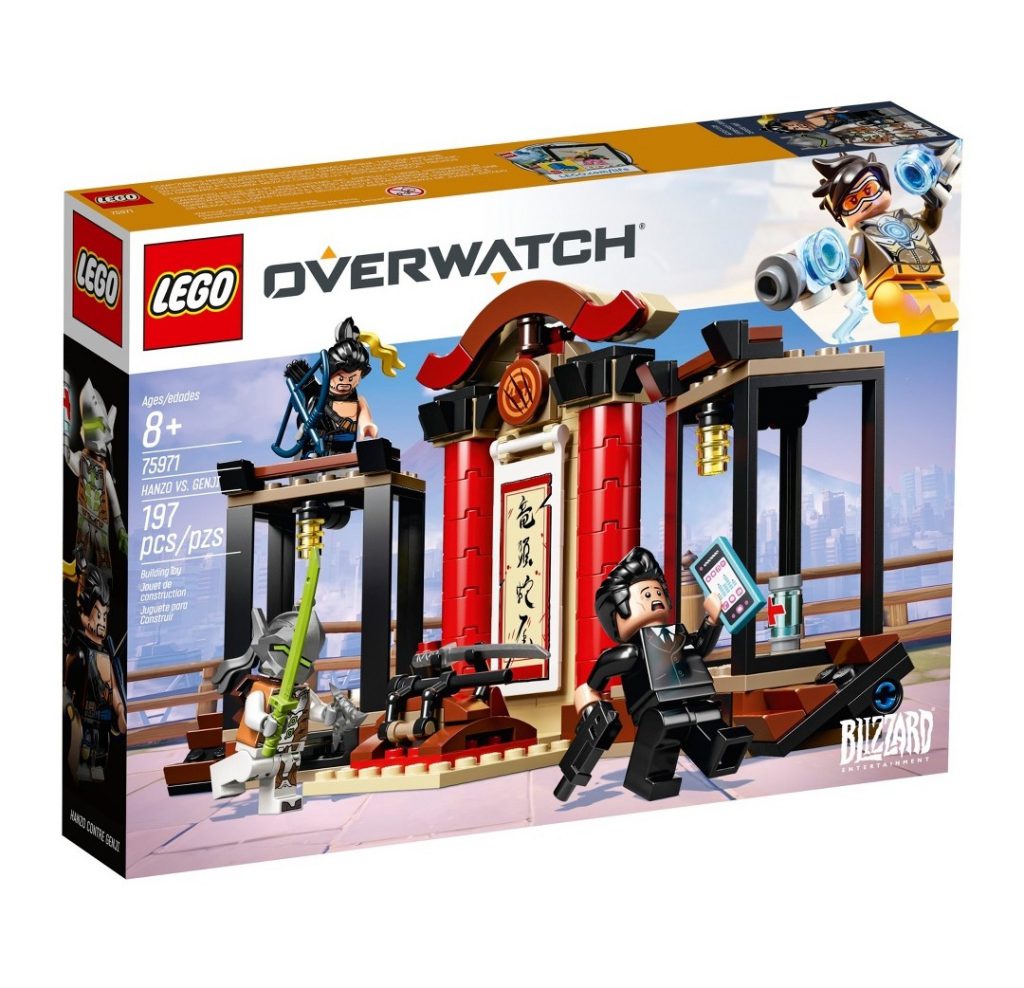 The NINJAGO-esque shrine at the centre of 75971 Hanzo vs. Genji is the location of the second capture point on the Hanamura map and looks like a neat, self-contained set. Depicting the site of a sibling showdown between the warring Yakuza brothers – as seen in another gorgeous mini-movie – it is packed with fan pleasing details. Weapon-scarred scenery and a health pack add an extra level of video game accuracy that rewards observant builders.

Hanzo comes equipped with a classic bow and quiver combo (the former in a distinctive shade of navy), while cybernetic ninja Genji is armed to the teeth with his huge, green Dragonblade and silver-grey shuriken. The bequiffed security guard clutching his mobile phone with a panicked expression on his face may be my favourite part of the set, as it is pure Easter egg taken straight from the short. 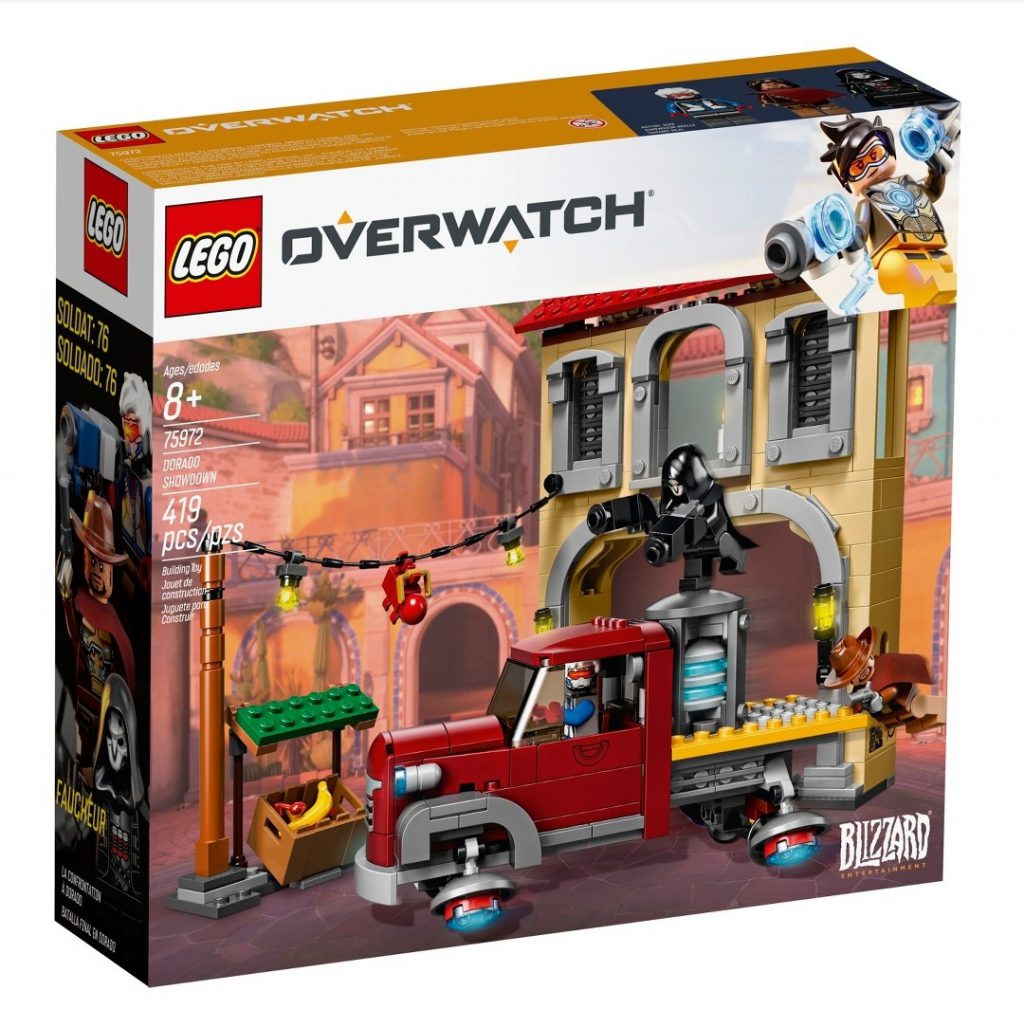 75972 Dorado Showdown ups the piece count. Another payload map located in Mexico, this time we also get a backdrop in the form of a building façade, a fruit stall and some strung up lanterns. It has quite a two-dimensional quality that could have come straight out of a western movie set, but it’s instantly recognisable from the game. The payload itself is more interesting, with the vintage design of the pickup chassis in contrast to the hoverplates in place of its wheels – a recurring design theme of the near-future Overwatch universe.

The images supplied don’t give too much away about the minifigures supplied. McCree is archetypal cowboy. Unfortunately, there looks to be a lack of finesse to Soldier: 76’s rifle and Reaper’s pair of shotguns. Although there is a certain charm to their oversized appearance, they mainly come across as boxy and unwieldy. 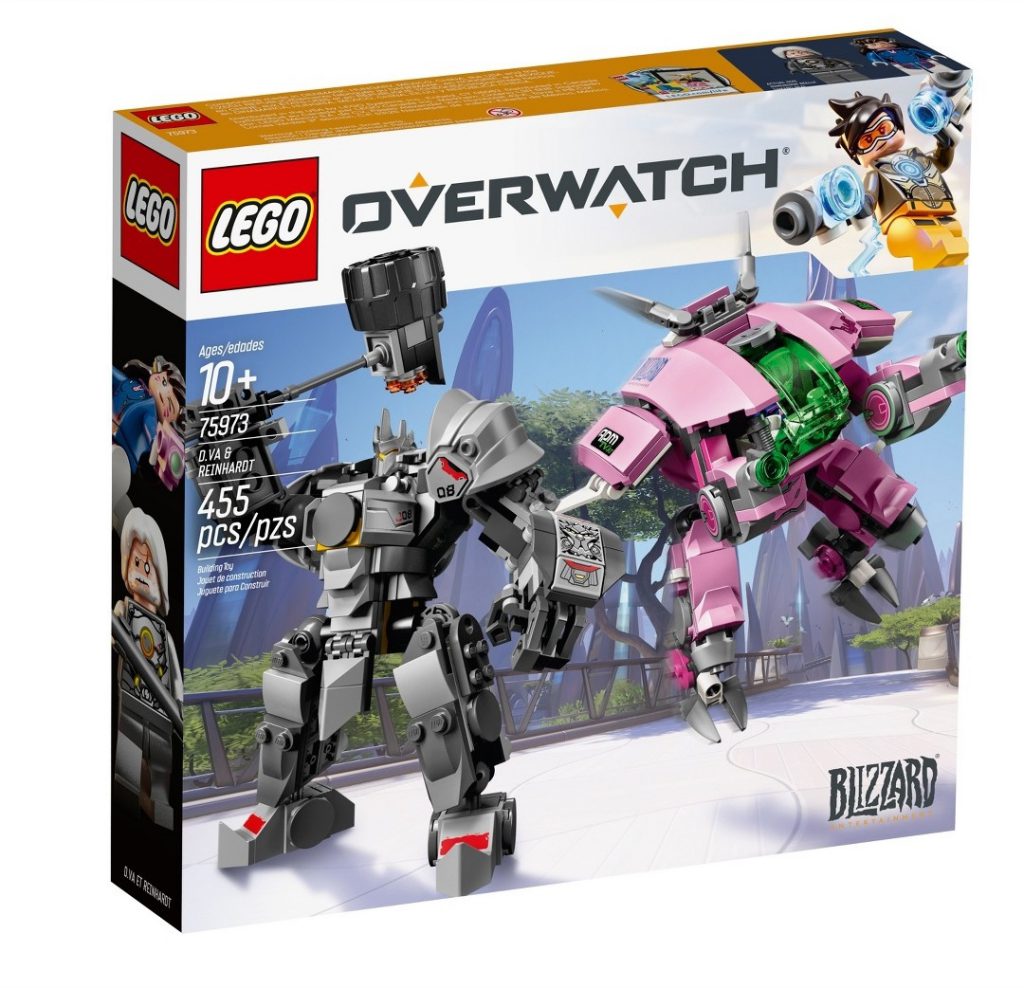 D.Va and Reinhardt (of the aptly-named 75973 D.Va & Reinhardt set) were two heroes that immediately came to mind when I learnt that LEGO Overwatch was in the pipeline and I was still wondering: “Well, what will you actually build?” Korean celebrity pro-gamer and mech pilot D.Va’s robotic ride was an obvious candidate for the brick treatment and the graceful curves and distinctive squat posture seem to have survived the transition. There may even be some appeal to mech and anime aficionados who are unfamiliar with the game.

Teutonic adventurer Reinhardt follows a similar template of a regular-sized minifigure inside a larger exoskeleton. All pauldrons and plating, and swinging a gigantic hammer, he oozes German engineering – although some knees wouldn’t have gone amiss. 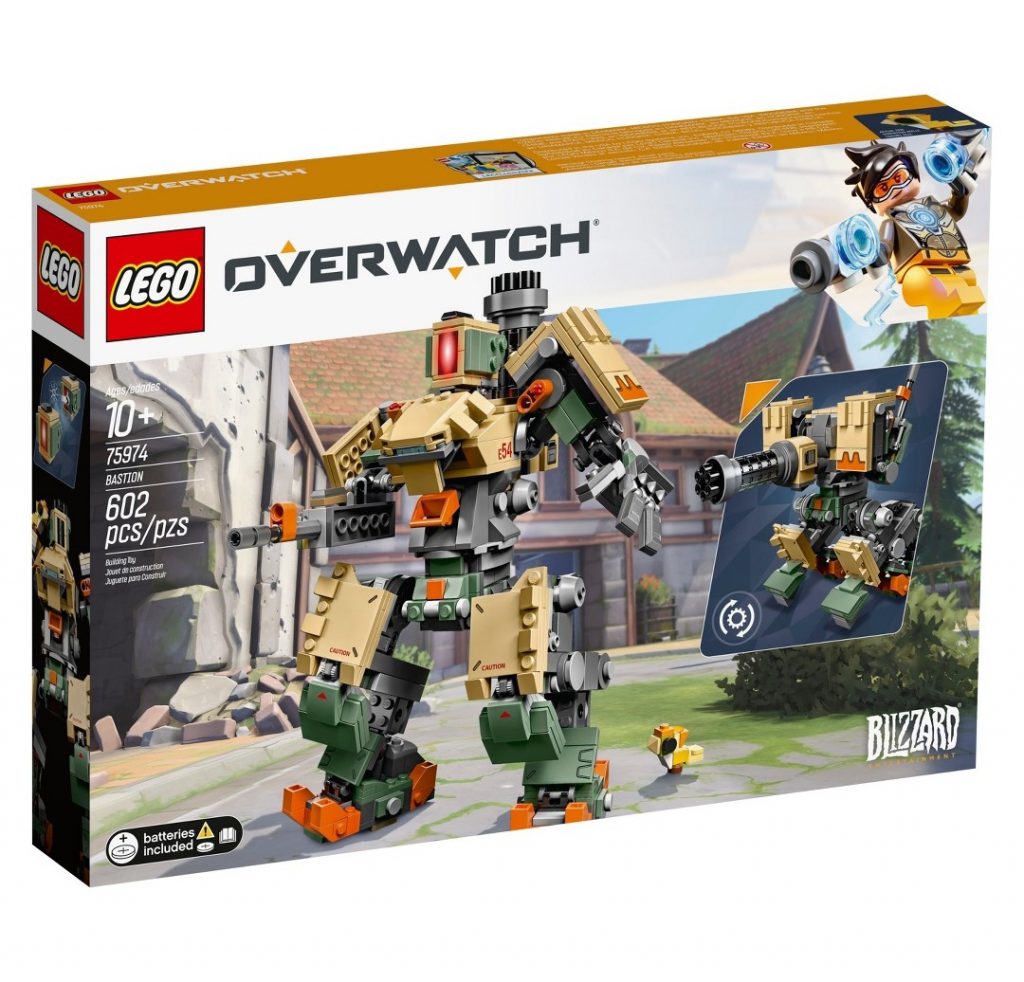 At first glance, 75974 Bastion may superficially look to be simply an upscaled version of the Blizzard exclusive 75897 Omnic Bastion. However, with the change of colour scheme and increased part count, we also get improved detail and character likeness. More significantly, we get a sentry gun mode.

I will be (very pleasantly) surprised if there isn’t some removal and reconfiguration of parts to get him into this alternate form, but the minigun looks positively menacing and will no doubt be the default shelf mode for many displays. 75974’s larger size seems to be the most obvious outlier in the range in terms of scale – a shame for those who are looking to arrange an array of heroes alongside each other. 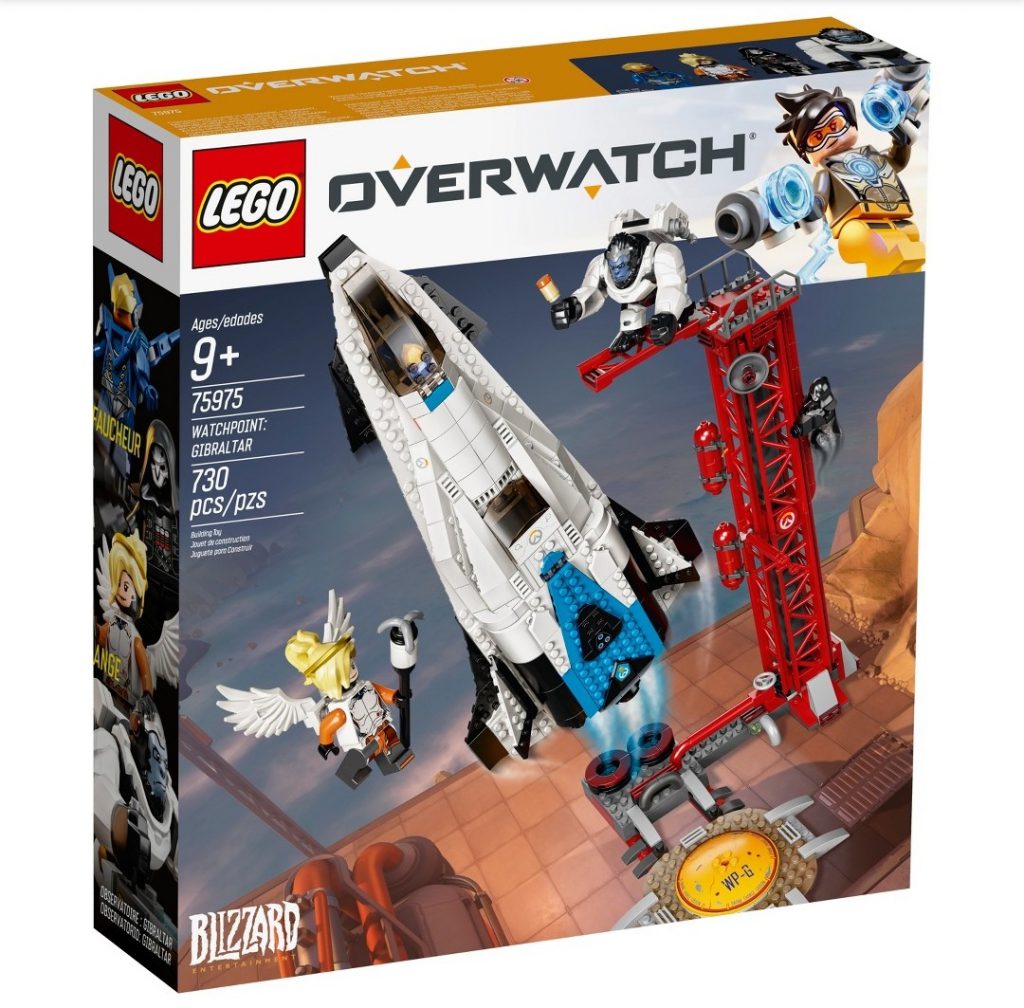 Finally we have the largest set to be announced, 75975 Watchpoint: Gibraltar. The ultimate destination for the payload from 75970, to me the rocket/shuttle and launch tower look a little lost and could have benefited from an additional building or more substantial base to give it a larger footprint. It seems a fair representation of something that in fairness not many players have probably taken notice of, despite the love Blizzard lavishes on its backgrounds.

Genetically-modified gorilla and scientist Winston appears to be a combination of a new mould with brick-built jetpack and weapon. Flying heroes Pharah and Mercy come with a stud launcher and staff respectively, while the latter is borne aloft by a particularly nice pair of angelic pinions. The set is rounded off by yet another Reaper. It’s difficult to tell if he is any different to the version included with 75972, but he doesn’t look it. Either way it seems an odd choice given the number of heroes not represented in this wave.

Of course opinions can change once you have something in hand, but early indications are that LEGO Overwatch is hitting the right notes. Recognising that the heroes are the main draw to many, the vignette-style sets place them firmly in the rich Overwatch universe with some clever winks to a dedicated fanbase.

The first wave of LEGO Overwatch sets is expected to launch in January 2019. To continue to support the work of Brick Fanatics, please buy your LEGO sets from shop.LEGO.com and Amazon using our affiliate links.