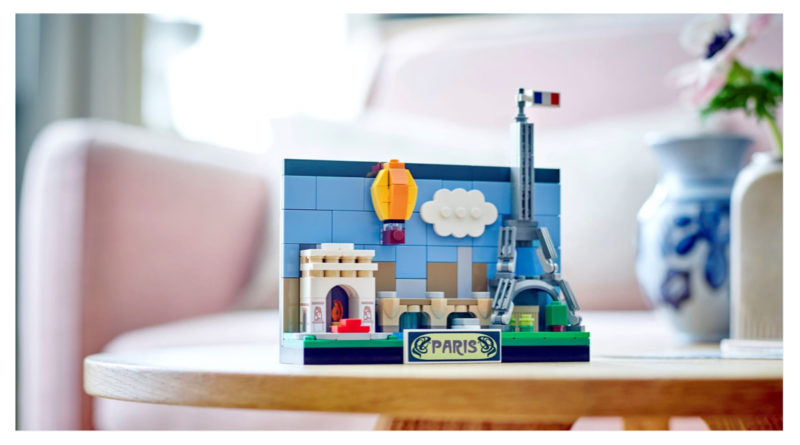 Joining New York and Beijing, a new LEGO postcard of Paris has appeared on LEGO.com, with a clue to what’s next in the series.

LEGO postcards are like buses. You wait ages for one, and then four come along at once. Originally slated for a January release, the small brick built skyline/diorama sets of New York and Beijing, smaller and more stylised than the Architecture series, finally appeared after an unexplained delay. Now, hot on their heels is a Paris postcard, set number 40568, and judging by the image of the back of the box, London won’t have long to wait until it gets its own postcard too.

At around 12cm high and 18cm wide, these sets, priced at £13.49, look to be ideal tourist souvenirs. With an impulse purchase price and a shelf friendly footprint we can see the range expanding to take in the great cities of the world. 40568 Paris Postcard features a tiled skyline and a number of iconic landmarks including the Eiffel Tower, the Pont Neuf and the Arc de Triomphe. In the sky is a balloon, possibly a nod towards aviation pioneers, the Montgolfier brothers, who first took to the skies in a balloon back in 1783.

The set is completed with a printed ‘Paris’ tile, in a font that pays homage to the Métro Alphabet typestyle which is used over the entrances to Paris Metro stations.

There are only three postcards on LEGO.com at present, each simply shown as ‘Coming soon’, with a release date of August 1. The backs of the New York and Beijing boxes show details of their respective sets, but zooming in on the back of the Paris set shows an image of a London Postcard.

With a set number of 40569, the set seems to show Big Ben (or the Elizabeth Tower, for the pedantic), the London Eye, a red London bus and what appears to be the electronic billboard in Leicester Square, although we might be mistaken on that. At the front of the set, a strip of trans-blue gives a hint of the river Thames. We’ll know more when the set is officially announced.

You can support Brick Fanatics buy purchasing your LEGO via our affiliate links. Thanks.