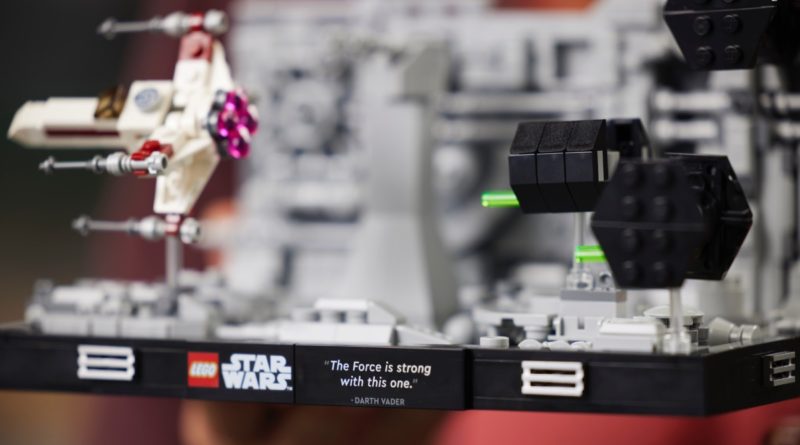 The LEGO Star Wars design team has reacted to the possibility of prequel trilogy sets in the theme’s new Diorama Collection.

Three new 18+ LEGO Star Wars sets will debut in April, each depicting a memorable moment from the Skywalker saga. While they don’t share the same scale, they do all follow a standardised template, situated on a black base with a relevant quote for the scene they’re recreating – and they all draw exclusively from the original trilogy.

More specifically, 75329 Death Star Trench Run Diorama, 75330 Dagobah Jedi Training Diorama and 75339 Death Star Trash Compactor Diorama are based on either A New Hope or The Empire Strikes Back, once again reflecting the LEGO Star Wars theme’s tendency to lean into the first run of movies for its adult-focused sets.

That pattern was briefly broken last year with the release of 75309 Republic Gunship, the first Ultimate Collector Series set based on a prequel trilogy vehicle since 2010. But between the Diorama Collection’s focus on the original trilogy and rumours of a UCS Luke’s Landspeeder arriving in May, the chances of more prequel trilogy 18+ sets feel pretty slim.

The good news is that they’re not off the table altogether – at least according to the LEGO Star Wars design team. During a recent roundtable interview, the theme’s Creative Lead Jens Kronvold Frederiksen commented on the possibility of prequel trilogy sets appearing in the Diorama Collection, suggesting the team doesn’t feel restricted to just the original movies.

“That’s not a limitation,” Jens explains. “We just thought here, it was a good start to take some of the most memorable moments from the classic saga, but we have been exploring a lot of other options. It’s just about if it’s something that’s memorable.

“You’ve also seen with [the UCS line] we’ve been moving away and looking into [the prequel trilogy] as a strong opportunity. We know a lot of people out there really like the prequel movies as well, so it could also be something we lean on with something like this.”

That sounds pretty promising for not only future prequel trilogy sets in the Diorama Collection, but in the Ultimate Collector Series, too. In the meantime, 75309 Republic Gunship is available now at LEGO.com, while 75329 Death Star Trench Run Diorama, 75330 Dagobah Jedi Training Diorama and 75339 Death Star Trash Compactor Diorama will launch on April 26.

Click here to read more from the LEGO Star Wars designers, including how they used Google to select the three scenes in the Diorama Collection’s initial wave.