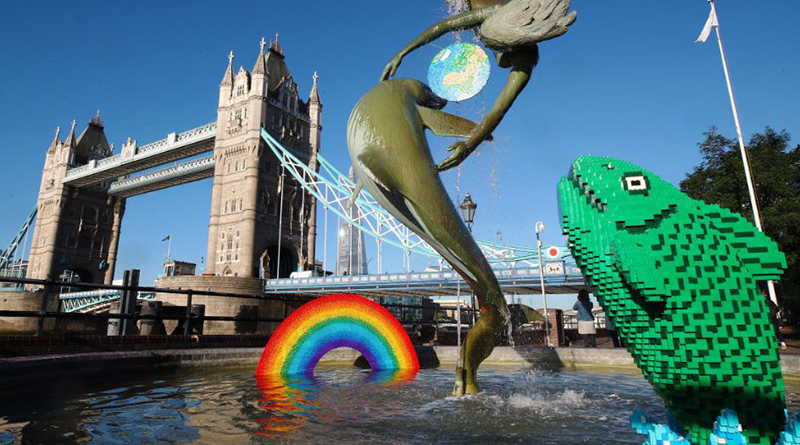 Following the launch of the Rebuild the World campaign, the LEGO Group is giving a selection of UK landmarks a LEGO makeover.

At an event in Billund, Denmark yesterday, the LEGO Group launched Rebuild the World – a global campaign to encourage creativity in children and acknowledge their ability to build the future. Across the UK, familiar icons are getting a brick makeover.

In London, LEGO brick sharks have arrived in the Shaftesbury Memorial Fountain, The Girl With Dolphin Fountain is more colourful than usual and a classic telephone box has started smiling, while in Birmingham, the familiar bull has a big grin and touch of rainbow magic. Meanwhile, a LEGO octopus has started to emerge from the moat around Roath park Lighthouse in Cardiff. A tram stop in Manchester has a new guest, with a LEGO rabbit sitting on top of it, then over in Nottingham the Robin Hood statue is pointing his arrow into a shooting star.

“We believe that children are born with natural creative ability. They see the world from a unique perspective and have the power to reinvent the world, identifying new solutions and ideas that will shape the future,” said Marius Lang, LEGO Head of Marketing UK and Ireland.

”To bring these children’s dream rebuilds to life on some of our nation’s most famous landmarks is hugely exciting and celebrates what Rebuild the World is all about – creative resilience and inspiration from the next generation of builders, seeing the world through children’s eyes using the LEGO system in play.”

As well as the rebuilds across the UK, the campaign features a series of posters and a big-budget video. The LEGO Group’s leaders introduced the campaign in a special video message.