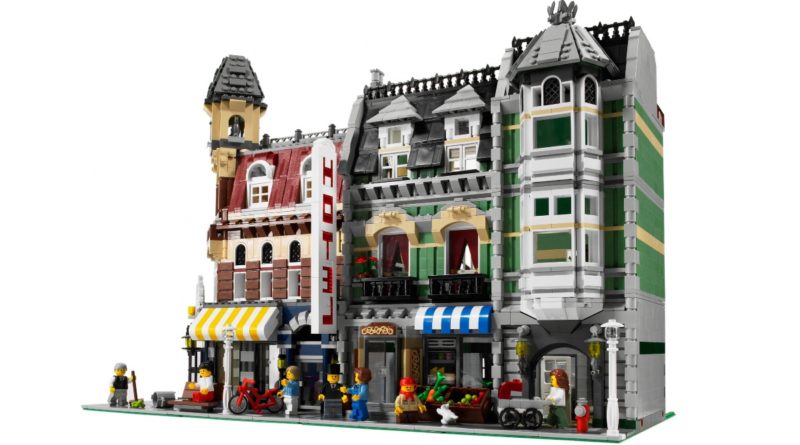 The LEGO Group has responded to requests to resurrect retired modular buildings as part of its new pilot program, which is currently trialling variants of existing sets.

At this stage, it’s basically impossible to mention revisiting retired products without also raising the possibility of resurrecting long-retired sets, including the earliest modular buildings. 10182 Café Corner, 10185 Green Grocer and 10197 Fire Brigade all command eye-watering sums on the aftermarket, and many fans would jump at the chance of buying them at retail again.

For myriad reasons – part availability, production capacity or simply dated techniques – the LEGO Group has so far resisted bringing back those late-2000s sets, in favour of launching brand new additions to the long-running LEGO for Adults (formerly Creator Expert) series.

But during a recent roundtable session with Brick Fanatics and other LEGO Fan Media, designer Mike Psiaki revealed that the LEGO Group actually has contemplated resurrecting the oldest modular buildings, potentially in new colours or with slightly tweaked designs.

“We’ve considered what that would look like, to take the Café Corner, and re-colour it and bring it back,” Mike says. “There are issues in that model, like the main door is an element that we don’t make any more, so then you need to start to redesign the door.

“Okay, now you’ve done that. What about the fact that that set doesn’t have any interior? Should we do something about that or not? So it opens up a huge discussion, which is something that we would be very interested in having, but I don’t know whether there will be the right time to do something like that or not.”

Because those structural and design changes would be necessary in the first place, however, those sets were effectively ruled out for the new pilot program. Beyond their colour palette swaps, 77940 and 77941 Mighty Dinosaurs and 77942 Fiat 500 are carbon copies of 31058 Mighty Dinosaurs and 10271 Fiat 500, reducing the resource cost in bringing them to market.

“In a pilot project like this, we’re looking for something that requires no design changes,” Mike explains. “Even in something like the Fiat 500, as soon as we want to change a 1×8 tile to two 1×4 tiles, we need to start going through all of these review processes again. And it may be less stressful to me as a designer, because I’m fairly confident, but we still need to go through all of the development of the model. In the end, we’re not really gaining anything by doing that.

Thankfully, that doesn’t mean the LEGO Group will never return to 10182 Café Corner, 10197 Fire Brigade and so on – it just means those sets don’t fit into this particular project.

“Even looking at something like the Green Grocer, there’s things in there that we would need to change,” Mike adds. “Even just the name – [if we’re] changing it from a green building, is it now called the Green Grocer or not? It opened up so many discussions that we were immediately just like, ‘No, this is not the point of what we’re doing right now.’

If you still need to catch up on current modular buildings before contemplating backtracking to earlier ones, make 10264 Corner Garage a priority: it’s due to leave shelves this year, and if the rest of the sets discussed here are any indication, it’s pretty much guaranteed to rise in price once it retires.