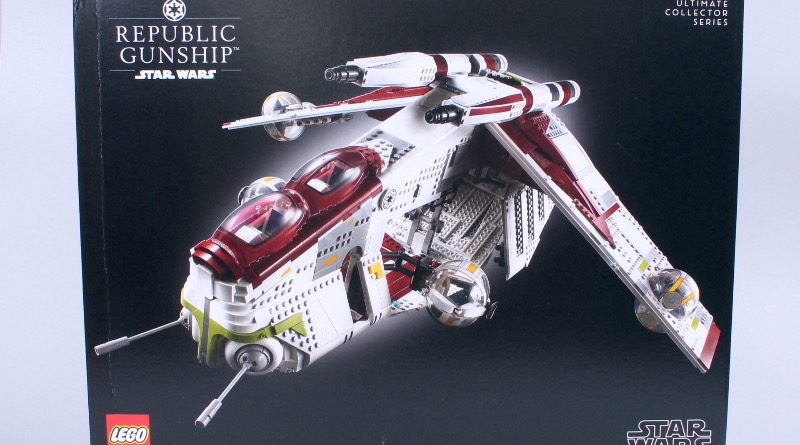 The LEGO Group has responded to the box art error in the first batch of 75309 Republic Gunship sets, offering a timeline for when the mistake will be fixed.

Instead of the appropriate Republic logo, the box and instructions for the newly-unveiled 75309 Republic Gunship’s initial print run features the Imperial logo. They are pretty similar logos – naturally, as one government simply transitioned into the other in Revenge of the Sith – but it’s still an easy mistake to spot if you know your Clone Troopers from your Stormtroopers.

The LEGO Group’s Senior Marketing Manager Ivan Podryadchykov has now explained to Brick Fanatics (and other LEGO Fan Media) that the company is ‘working on an update’ to the set’s packaging and instructions, but it won’t hit shelves any time soon.

“It depends on many factors, but we believe that you should see 75309 Republic Gunship in the updated packaging as early as December, or in some cases as late as February, depending on the region,” Ivan says. “It depends on the demand, obviously, for this product, but definitely early Q1 2022, we should see this product available with the right logos on the packaging.”

Ivan also commented on the possibility of the misprinted box increasing in value on the aftermarket, stating that the LEGO Group didn’t intentionally seek to create collectible packaging – or drive more sales early in the set’s lifespan.

“We want to say that it was a genuine mistake,” Ivan explains. “It was never our purpose to create additional commercial momentum by adding an Empire symbol on the packaging. We believe that the value of the model is still very high, even though there is a mistake on the packaging and building instructions.”

However, Ivan did acknowledge that the error could indeed encourage fans to pick up 75309 Republic Gunship sooner than they intended – and possibly to buy two copies, which would of course have the side effect of boosting the company’s bottom line.

“We know that some fans may appreciate having both versions of the packaging with the wrong symbol and with the right one, to keep the good memories about the launch of this product,” Ivan says.

Time will tell whether the first batch of boxes and instructions for 75309 Republic Gunship hold any additional value on the secondary market, but if you’re among those fans hoping to take that leap of faith, you’ll be able to do so from August 1.

To learn more about the model inside the box, check out our early review, and hear why the Republic Gunship was a ‘nightmare’ for the designers to bring to life at this scale.