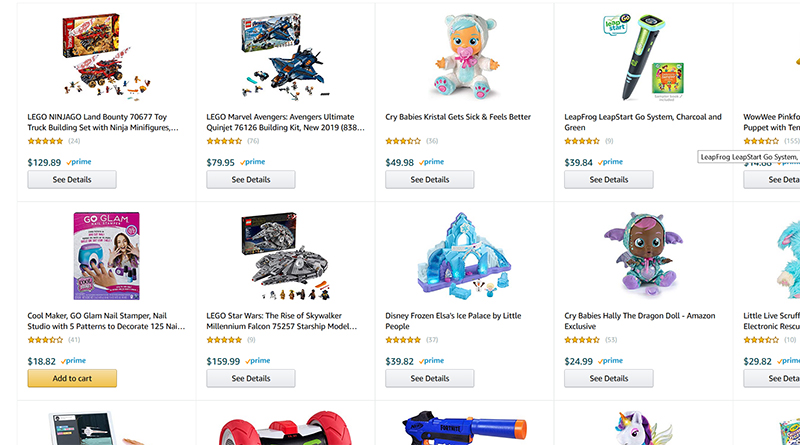 LEGO sets feature prominently on the Amazon top 100 toys for 2019, that is announced as Bloomberg highlights the practice of manufacturers paying for spots on the coveted chart.

Amazon.com has released the top 100 toys for Christmas 2019, including a number of LEGO sets. Bloomberg reveals that manufacturers sponsor the list, and the more they spend on sponsorship, the more slots on the list they receive. This means that companies like the LEGO Group have paid the worldwide retailer and digital services provider to appear on the annual chart, despite it being billed as “thoughtfully curated”.

Bloomberg has seen documents that confirm that Holiday Toy List sponsorships run to as much as $2 million, with the more a sponsor pays, the more prominently their products will feature on the website. This year’s target for toy sponsorships was $20 million.

Robert Weissman, president of the consumer advocacy group Public Citizen, was interviewed by the website and questioned the ethics behind not disclosing the sponsorships: “They don’t write ‘paid ad’ on it because it completely changes how consumers perceive the information. If the list is entirely or in part paid advertising, people have a right to know.”

“Every product on our annual Holiday Toy List, which features family gift ideas from new releases to customer favorites, is independently curated by a team of in-house experts based on a high bar for quality, design, innovation and play experience. We source product ideas from many places, including our selling partners who have an opportunity to nominate their best toys for the season and increase visibility of those toys,” Amazon said in response, in a statement that does not precisely clarify the relationship between sponsoring the list and making nominations.

Amazon continues to concern toy retailers, due to the aggressive pricing strategy of the online giant that often leads to toys being sold at a loss. Because of the website’s market domination, manufacturers are keen to have products promoted on it as prominently as possible.