With influencers under the spotlight after recent high profile controversies, the LEGO Group provided some commentary in an article looking at the practice.

Marketing industry website The Drum decided to look into whether the social media influencer bubble is about to burst, after negative reaction to recent high profile posts, Advertising Standards Agency probes and potential fraud. To find out whether companies believe the practice of using influencers is running out of steam, the website spoke to five large companies, including the LEGO Group, for reaction.

For those who are blissfully unaware of what social media is and what it is for, companies pay prominent users to promote products. The practice is particularly linked with Instagram and YouTube but is also common on Twitter and Facebook. Influencers are paid with money and/or products to promote that particular product.

In the recent case of Scarlett Dixon, there was a backlash against her promotion of Listerine mouthwash. Twitter and Instagram users complained about how staged and false the image was, with LEGO bricks even making it into the conversation somehow:

Lars Silberbauer, Global Director of Social Media and Search at the LEGO Group, seems to think that the influencer model is adjusting, but does not see it disappearing anytime soon. “Influencer collaborations are hyped and, in some cases, very overpriced, but it doesn’t change the fact that millions and millions of people all around the world are following and taking inspiration from Influencers. So yes, prices will be adjusted, and brands will need to ramp up on their ability to work with influencers.”

What is even more interesting for LEGO fans is that he also revealed to the Drum who the LEGO Group use as influencers. “There’s a huge LEGO community that we collaborate with and we’re also collaborating with influencers outside the toy space (parent influencers). We approach those influencers where we believe there’s a fit with the LEGO brand and the influencer’s content and personality.” So if any parents pop up online being entirely effusive in their praise for LEGO sets, check the caption to see if it is a paid-for promotion.

With the LEGO Group advertising for a new Social Influence Manager to focus on YouTube, it seems that the company will be seeking to expand its reach on the video content website.

As social media influencers continue to make up a section of the advertising mix for big companies, consumers must continue to be aware when a social media post is an authentic opinion and when it is part of a company’s campaign.

The first review of LEGO Marvel 76187 Venom is already online, more than two weeks ahead . . .

END_OF_DOCUMENT_TOKEN_TO_BE_REPLACED

LEGO Creator Expert 10264 Corner Garage – reportedly the next modular building to retire – is back . . .

END_OF_DOCUMENT_TOKEN_TO_BE_REPLACED

The lesser-spotted LEGO Botanical Collection 10281 Bonsai Tree is finally back in stock and available to . . .

END_OF_DOCUMENT_TOKEN_TO_BE_REPLACED

Brick Pic of the Day
April 9, 2021 Chris Wharfe No comments

Image: Benjamin Liboriussen A flaming good build. Are you a great LEGO photographer? Have you built an impressive . . .

END_OF_DOCUMENT_TOKEN_TO_BE_REPLACED

As the BrickLink Designer Program process continues, 13 projects have moved on to the next stage before funding . . .

END_OF_DOCUMENT_TOKEN_TO_BE_REPLACED

Limited space isn’t the only reason some Looney Tunes characters didn’t make the cut for the . . .

END_OF_DOCUMENT_TOKEN_TO_BE_REPLACED

A handful of LEGO Harry Potter sets will retire from production in 2021, so here’s what . . .

END_OF_DOCUMENT_TOKEN_TO_BE_REPLACED 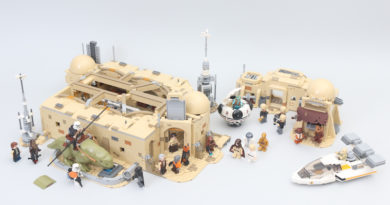