After seeing Solo: A Star Wars Story, Brick Fanatics has ranked the LEGO sets based on the movie in order of screen time

There are a total of five proper LEGO sets available based on Solo: A Star Wars Story, so it might be just as well to buy them all. But if you prefer to own the sets that actually show up on the movie for a while, then here is your handy guide to which sets show up the most and which appear the least. This is scientifically based on the findings of a bleary eyed Editor who is recalling what he saw at midnight around ten hours ago, with all the rigour and stopwatch checking that such methodology implies.
Spoilers ahead – do not read this feature until you have experienced Solo: A Star Wars Story.

Was this even in the movie? The LEGO Group released a standard TIE Fighter as part of the film’s launch wave, with movie specific minifigures. Yet the only TIE Fighters clearly visible on screen were a new type of souped up fighter that drop from the Star Destroyer that the Millennium Falcon comes face to face with when escaping Kessel. The regular TIE may have appeared as part of the fast paced pursuit or in the background elsewhere, but if it did it was not an easy spot. It is odd that this was released rather than the new version introduced in the film.

What looked like a daft design invented for a LEGO battle pack turned out to actually be in the movie – who would have thought it? During the opening scenes set on the planet of Corellia, this speeder briefly pursues Han Solo in his speeder, before the scrumrat pulls a cheeky manoeuvre and efficiently deals with it. 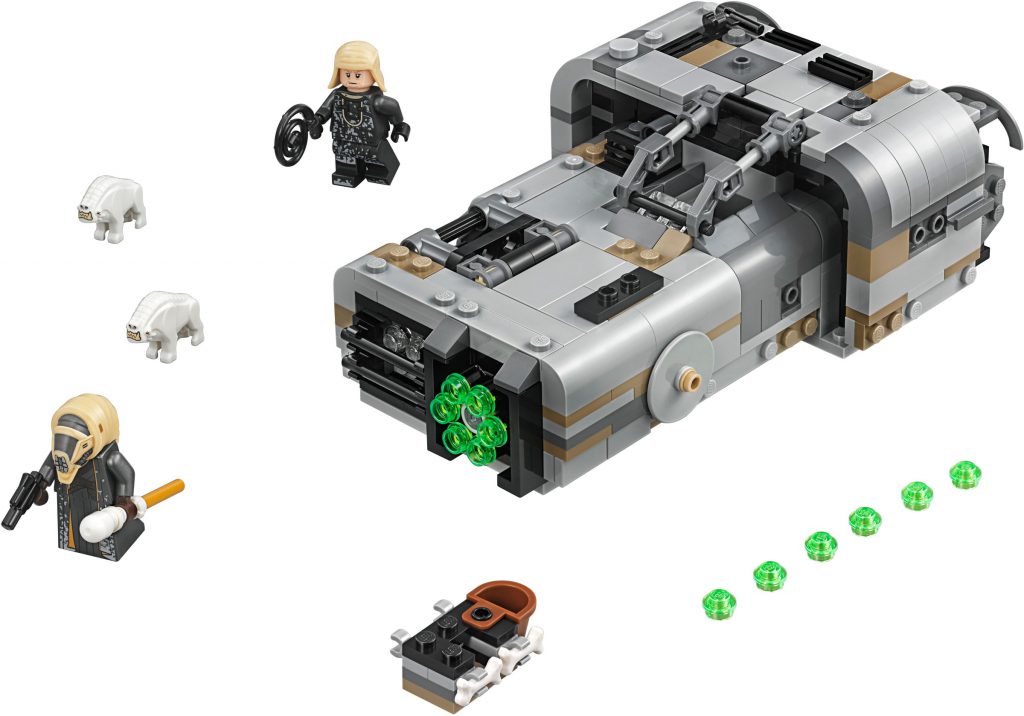 Three of the five sets are all based on the first ten minutes of the movie, in which the audience meets Han Solo and Qi’Ra on the depressing world of Corellia. The two are essentially owned by a gangmaster who forces them to commit crimes on her behalf. After a job goes bad, Han and Qi’Ra make a hasty getaway but chief enforcer Moloch is sent to pursue them. The Corellian Hounds are even fairly prominent during the sequence, although do not get a moment to really shine.

When the audience meets Han Solo for the first time in the opening of the film, he is driving a speeder he has stolen during the whole job-gone-bad thing. It is using this vehicle that he and Qi’Ra make their getaway, heading for the spaceport in order to escape off world. There is nothing simple about their leaving, as Moloch and his goons pursue them, in what is a genuinely exhilarating chase sequence with some really thrilling moments.

Unsurprisingly, the Millennium Falcon gets the most screen time by a long way in Solo: A Star Wars Story. For the majority of the film’s runtime, the ship belongs to Lando – in fact the final scene in which Han wins it from Lando feels like an unnecessary coda – but Han and Chewacca get their opportunity to pilot it, and make the Kessel Run in less than 12 parsecs. Significant character moments happen on board the ship, there is great tension at points during its escape from Kessel and Lando’s cape room is a delightful touch. The film is almost as much an origin story for the ship as it is for the titular character.

Solo: A Star Wars Story is in cinemas now