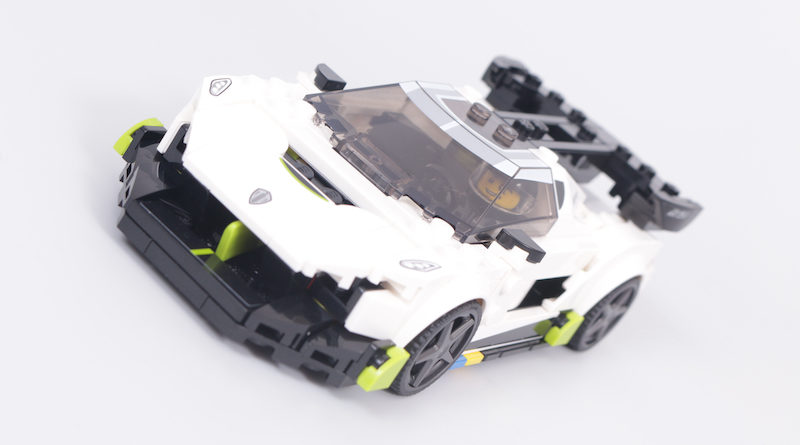 A Koenigsegg sports car has been a long time coming to LEGO Speed Champions – so is 76900 Koenigsegg Jesko worth the wait?

Swedish automotive company Koenigsegg has forged a reputation in the past 25 years for its high-performance cars and its successful pursuit of high-speed performance, holding records in no fewer than four of its models produced including most recently the Regera, the predecessor to 2021’s Jesko.

Competing with the likes of McLaren and Bugatti for world records such as the fastest production car and fastest to reach and decelerate from 300 and 400 km/h respectively, it is with some surprise that it has taken as long as six years for Speed Champions to create a first LEGO Koenigsegg.

The selected Koenigsegg for the LEGO treatment is 2021’s Jesko, one of a number of cars coming up for release that look set to challenge the Koenigsegg Regera’s mantle as the most powerful production car in the world, and the highly disputed title of world’s fastest.

Bugatti announced in late 2020 that its Chiron Super Sport surpassed the Koenigsegg Agera RS’s speed record for a production car to become the first to go beyond 300mph, clocking in at 304.77mph. In response, Koenigsegg estimates that the Jesko Absolut, a particular version of the Jesko designed to be even faster, will reach speeds of 310mph. Like we say, it’s been a long time coming to see a Koenigsegg in the LEGO Speed Champions range…

The wait has been worth it, and particularly so that we can see a LEGO Koenigsegg designed to the eight-stud-wide standard introduced to Speed Champions in 2020. That switch to a wider chassis has opened up a world of design possibility and hyper-accuracy to the models that the theme has since produced, and for a car as intricately shaped as the Jesko, it is no doubt a contributing factor to the strongest aspects of 76900 Koenigsegg Jesko.

Those are primarily at both ends of the LEGO model, where 76900 Koenigsegg Jesko really sings with authenticity – indeed, it’s where the box art focuses strongest too, and for good reason. The front end of the vehicle notably dips forward over a striking front splitter that has been expertly realised in LEGO form thanks to the use of a lime green cleaver piece. It’s an unexpected design solution but one that is so important to lining up the LEGO model as closely to the source material as possible, for being an area of the car your eye will almost always be drawn to first.

That is almost always, because the rest of the time it will be focused on the huge rear wing that protrudes from the central canopy out across the back, with particularly-shaped winglets on each end. With regards to LEGO build legality, the brick version does struggle to replicate the very same level of delicacy as the real-world car, but the shape is otherwise skilfully recreated and in tune with the rest of the model, particularly so around an effortlessly – and highly accurate ­– reconstruction of the rear of the vehicle. The central exhaust being built out of an engine piece is a notable highlight here.

There are also smaller details dotted around 76900 Koenigsegg Jesko that cannot be overlooked for how simple yet effective they are, from the shaping of the rear lights to even the stickers used to complete the wraparound windscreen – these all contribute to making this a charming recreation of a soon-to-be-iconic hypercar.

That said, within the working budget and even within the broad range of parts available to the LEGO Speed Champions team, there are compromises in the final design of 76900 Koenigsegg Jesko, primarily found along the sides of the vehicle. There are so many subtle lines and changes of angle in the Jesko’s bodywork along the doors that almost anything built to LEGO design standards would have to make a choice between.

As it is, the model finds a halfway house that neither continues the sharp line that continues from the front of the door all the way over to the back wheel arch, nor truly captures the depth and angle of the door panels that are shaped as such to encourage airflow.

These are minor criticisms, though, of an otherwise charming and engaging first LEGO Koenigsegg build.

Included with 76900 Koenigsegg Jesko is the one minifigure complete in Koenigsegg-branded race overalls. LEGO Speed Champions is hardly about the minifigures, but this is a nice and exclusive design to add something extra to the set.

Along with all the single-car eight-stud-wide LEGO Speed Champions sets, 76900 Koenigsegg Jesko comes in at the adjusted, slightly higher price of £17.99 / $19.99 / €19.99. Whilst on face value it may not feel like the best use of your LEGO budget, these Speed Champions sets do not disappoint.

In the case of 76900 Koenigsegg Jesko, there is so much to such a complicated and unique car design that has been smartly captured in brick form. Doing so across the car’s most familiar all-white colour scheme and still managing to hold the eye’s interest is testament to how good this set is when in hand. Price is one thing to consider, but value is quite another. It’s just one car, but it’s got a lot to give a more advanced LEGO builder.

We may have had to wait six years for a LEGO Koenigsegg to come along, but ultimately it has been well worth it. The key identifiable details of the real-world hypercar have been skilfully captured in this LEGO model and make for a fun and engaging build. That it comes in the eight-stud-wide era of Speed Champions is also pertinent – the closest comparison for how it could have looked in six studs is probably found in 2015’s 75909 McLaren P1, so there’s a lot to appreciate in the 2021 approach here.

This is the only way any of us will ever own a Koenigsegg Jesko too – all 125 units of the real thing sold out in pre-production over two years ago – and fans of the soon-to-be fastest production car in the world can’t go wrong here. Everything to enjoy and appreciate about the Jesko is captured in 76900 Koenigsegg Jesko and, whilst it may not be the most perfect, all-round Speed Champions car yet, it still manages to wonderfully champion both the unique design of the real-world car and what is possible within the medium of LEGO.

Support the work that Brick Fanatics does by purchasing your LEGO through one of our affiliate links. Thank you.

How long does it take to build LEGO Speed Champions 76900 Koenigsegg Jesko?

It takes about 45 minutes to put together 76900 Koenigsegg Jesko, thanks to a number of more intricate stages than you’d otherwise expect from a LEGO car.

How many pieces are in LEGO Speed Champions 76900 Koenigsegg Jesko?

76900 Koenigsegg Jesko is the smallest LEGO Speed Champions set released in the summer 2021 wave, coming in at 280 pieces. At time of release, it is also the smallest ever eight-stud-wide car from the theme.

How much does LEGO Speed Champions 76900 Koenigsegg Jesko cost?