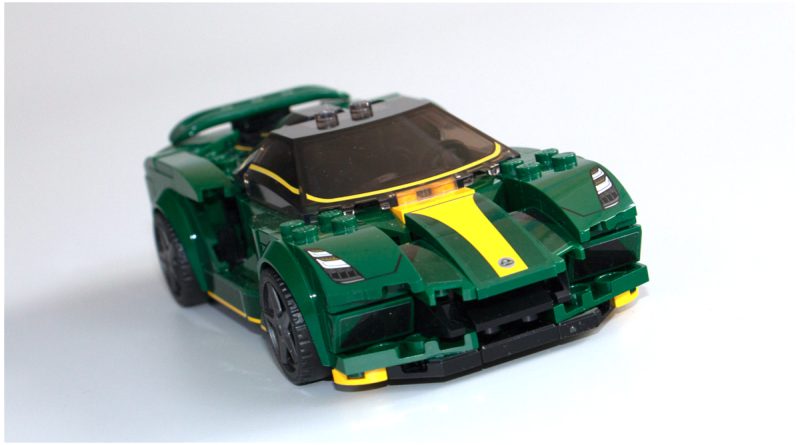 Joining the LEGO Speed Champions line-up is a lean, green electric machine from Norfolk. Grab a battery pack and power up 76907 Lotus Evija.

The Speed Champions range is beginning to expand its remit. Recent additions have included the classic James Bond Aston Martin DB5 and the rather less classic Dodge Charger from the Fast & Furious series. Indeed, there have been suggestions from Design Manager Chris Stamp that the range could, theoretically, include any sort of car in future.

For now, however, we’re focusing on the core theme of the range. Something low, fast, expensive and – for most people – unobtainable. The Lotus Evija (it’s pronounced Eh-VIE’-ya, apparently) is an all-electric, 1,970-horsepower supercar capable of 200mph+ in near silence. And there are only 130 being built, so if you don’t already have one parked in your garage, the Speed Champions version is probably the only way you’re going to get your hands on one. Is it a suitable alternative?

LEGO Speed Champions 76907 Lotus Evija is already available from LEGO.com and LEGO Stores. You can also find it at a number of other retailers, some of which may offer the set at a discount from time to time. Keep your eyes peeled.

In a world where LEGO news is dominated by larger and larger sets with larger and larger prices, it’s a pleasure to open a set that costs less than £20. While the expansion of many themes have proved difficult to keep up with for the completist, it’s not beyond the realms of possibility for someone to maintain a full set of Speed Champions models. They’re both affordable and, being mostly compact in design, displaying them isn’t too much of a headache.

If you do have a collection, then the Lotus Evija will stand out. In the traditional Lotus racing livery of green and yellow, there is little in the wider theme that matches it. With most cars in the range coming in bright reds, blues, whites and yellows, those that are green tend to be the ‘acid green’ variety, with only the 1968 Ford Mustang Fastback coming in a similarly muted colour.

The Speed Champions range has become a byline for innovative build techniques, as the designers try to depict the sinuous curves and odd shapes that make up today’s supercars, and the Evija is no exception. The rear of the cockpit, both inside and out, is a complex mix of angles while a multitude of small plates and tiles do their best – not entirely successfully, it must be said – to replicate the sculpted sides and doors.

The downsides are that at this scale, it’s almost impossible to introduce enough ‘curviness’, resulting in a fairly squared-off finished model. The car still looks very cool indeed, but compare it to the original and the limitations of the medium are exposed.

Credit has to be given though, for the way the rear light cluster has been built. On the actual car, the lights are a thin ring in the shape of a (consults Google) trapezium, surrounding a gaping hole that looks like a top-end loudspeaker from a 1970s hi-fi. Simulating this with a handful of plates is a challenge that would be beyond many, but the designer pulls it off.

Elsewhere, the sea of green is broken up with yellow highlights. Some, like the canopy pieces, are printed – but most, as is the way of Speed Champions, are stickers. They’re fairly straightforward and finish the set off nicely.

As with most LEGO Speed Champions sets, a minifigure is supplied. The driver comes in a Lotus green racing suit with a yellow/gold print across the torso, reaching as far down the legs as the LEGO Group’s printing process will allow. The print carries over to the back of the torso, but doesn’t extend as far as the arms. There’s a choice of black racing helmet with visor, or hairpiece, and the driver comes with that Speed Champions staple, the oversized spanner.

While the cost of the average LEGO Speed Champions set has risen recently, £19.99 still feels like a fair price for 76907 Lotus Evija. It’s a satisfying build experience and a neat display set and you won’t feel short-changed at full price. If you can find it at a discount though, even better. If you’ve got a LEGO itch to scratch and you know your limited slip diff from your Venturi tunnel, then this could be just the set for you.

In a theme that continues to impress, it seems like we’re damning this set with faint praise to say that it’s merely ‘very good’. At this scale it’s near impossible to recreate the curves of a modern day supercar. As a result, much like the non-F1 car from 76909 Mercedes-AMG F1 W12 E Performance & Mercedes-AMG Project One, this car comes across as a little slab-sided.

It’s nitpicking though, as putting the green Lotus together still makes for an interesting hour and you’ll undoubtedly learn a thing or two from the build that you can use in your own creations. At £20 it’s a fair price and you won’t feel short-changed. If you get the opportunity to pick it up at any kind of discount though, then it’ll be an absolute bargain.

Support the work that Brick Fanatics does by going all-electric using our affiliate links.

If price is your determining factor then by and large you’re restricted to the rest of the LEGO Speed Champions theme. If you’re looking for a supercar then you won’t do better than 76908 Lamborghini Countach. The design may be nearly 50 years old, but it still looks like something from the future.

Away from road-going cars, 76906 1970 Ferrari 512 M looks gorgeous and is a masterclass in LEGO creativity. If your budget is flexible, however, 10265 Ford Mustang is one of the best sets of the past few years. The only downside being that if you buy it, you’ll almost certainly want to put 10304 Chevrolet Camaro Z28 next to it.

How long does it take to build LEGO Speed Champions 76907 Lotus Evija?

76907 Lotus Evija is a typical Speed Champions model, so set aside around an hour to complete the build.

How many pieces are in LEGO Speed Champions 76907 Lotus Evija?

There are 247 pieces in 76907 Lotus Evija, mostly small and fiddly. The pieces come in two numbered bags, plus the main chassis and a bag of wheel centres which gives you a choice of two different designs.  There is also a sheet with 20 stickers, most of which are fairly straightforward to apply.

76907 Lotus Evija is a fairly compact model. It measures just over 15cm in length, a whisper over 7cm wide and it stands just 4cm high.

How much does LEGO Speed Champions 76907 Lotus Evija cost?