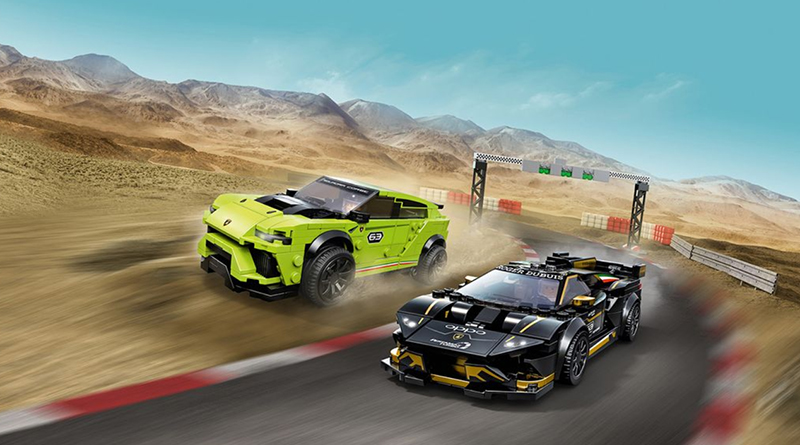 Each year, fans are eager to see the latest LEGO sets. What new releases are coming? In the case of LEGO Speed Champions, they wonder which cars will be added to the line-up. When the 2020 sets were revealed though, it became apparent that a shift had happened – the cars had switched from the six stud wide format to an eight stud wide format.

This change was intended to address a frustration fans had been expressing for a while – that the six stud wide format did not replicate the real supercars well enough.

How did you reach the decision to change Speed Champions to eight wide cars?

Well we just thought eight is a better number than six, that was it really [laughs]. No, the same as with any product line, we listen a lot to the consumers. As well as doing a lot of the internal testing we constantly watching YouTube video reviews, read the magazines, reading the comments on LEGO.com and all of the different shopping websites. Because we can’t just walk up to people in the street, we can’t just hang out all day in the LEGO Store.

Personally I do a lot of the research just to know what people’s reactions to stuff is, what works, what didn’t work, what worked that they thought could be better? All that kind of stuff.

I have been on Speed Champions since the beginning, I developed the concept in 2014 for the 2015 launch, did four of the seven products for that launch, I was the only designer for the 2016 launch, then developed a lot of the concept models for the third launch when I went off to work on NINJAGO and then The LEGO NINJAGO Movie.

Then I came back for this launch, as the Design Lead for 2019, so I was able to map out what the assortment was. There were a few cars that we knew straight away we wanted, we knew we wanted the Mini because we had been in dialogue with Mini for a while, the McLaren we wanted because I had seen the Senna right back when it was a clay model three years ago.
Coming back to the Speed Champions theme it was really quite a rushed process, we didn’t really have time to start all of this exploration.

But there was time to do the research ready for 2020?

After finishing up the 2019 launch I spent the summer exploring, going through all the feedback. What is something that constantly gets commented on? The main thing was proportions. Everybody said they like Speed Champions, but the cars are too thin. So the first thing I looked at was how can we make them the correct proportions? We investigated seven wide, eight wide, we investigated ten wide – what is the right proposal to make these cars the correct, authentic vehicle?

Not so much when I was a kid but as I get older, I want the driver in the right side of the car, I don’t want him in the middle. Now you can get a driver and a navigator in, you can also build in a handbrake, you have got a gearstick, the little details, which is something we have talked about for years.

I remember we used to do it on LEGO Adventurers back in the day, like Johnny Thunder and things, there was a special cockpit element. We have never done it in our race cars, so that is something we have been able to do this year through the use of new elements. We did actually talk about what if we do eight wide but keep the central driver, so it gives you more building space, but do you want the building space? You are not going to see that on the outside. Or do you want the driver and navigator or driver and a passenger?

Just talking to some of my colleagues, you hear this comment a lot: “actually I think I might start collecting Speed Champions now”. That is the kind of comment that we want to receive, we want to be more appealing. Maybe people who walked past this on the shelf because they thought it was too close to City, is maybe a bit down in age, actually it is now more appealing to the older kids as well as the younger kids.

We definitely previously focused primarily on kids’ play and we don’t admit it but adults play too and adults collect these. They might want it on their desk at work, adults still buy this and they blame it on little Jimmy, saying “oh it is for my son at home”.

One of the things kids we found out is that kids aid they prefer this because it fits better in their hand. Of all the comments I expected about nicer details, bigger so it is automatically better, a kid saying it fits better in their hand I never expected, because kids have small hands. But we are leaning more towards the adult, though it still needs to be a kid’s toy because LEGO is a kid’s toy at the end of the day.