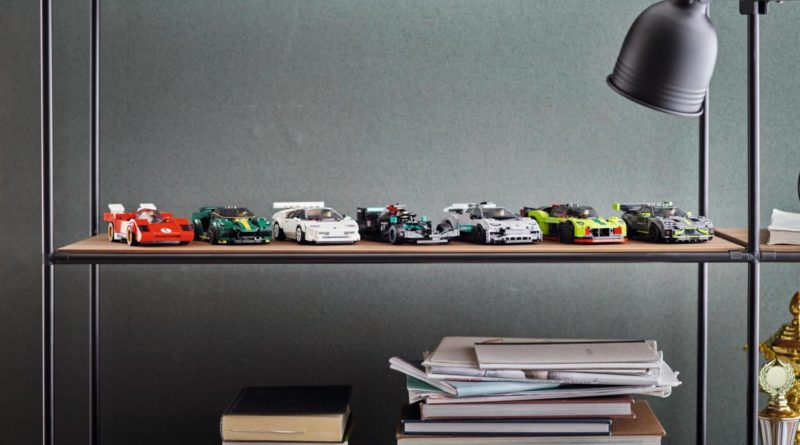 LEGO Speed Champions design lead Chris Stamp responds to feedback from fans: “Nobody’s more critical of us than ourselves.”

The theme’s growing garage of vehicles is about to get a little bigger, with seven new cars launching in March – including the first eight-studs-wide Formula 1 racer in 76909 Mercedes-AMG F1 W12 E Performance & Mercedes-AMG Project One. But as the reaction to even those sets has shown, Speed Champions is subject to an absolutely intense level of scrutiny from fans – and it’s one that’s continued across the shift to the new format in 2020.

For Speed Champions design lead Chris Stamp, that move from six-studs-wide cars to eight-studs-wide created new opportunities and challenges in tandem, but mostly, it meant even more pressure to get things right – not only externally, but internally.

“Naturally, we’ve approached the cars differently,” Chris tells Brick Fanatics. “But I think the cars have also demanded more from us, because we are our own biggest critic. We see a lot of people online loving [the sets], or wishing we’d done better in certain areas. But nobody’s more critical of us than ourselves. We’re constantly challenging each other to do better and pushing each other to do better.

“I’m probably the worst kind of design lead, because with a lot of projects, you can do one or two or three or four loops; you do a few and then you’re done. With Speed Champions, I try to push the designers to the next level. Because I feel, whether it’s true or not, that the fans ask more of us than they do of the majority of the product lines.

“If you take Super Heroes, for example, the Avengers Tower – you can get the silhouette, but they’re not going to care if it’s got the right number of windows in the building. It’s the same with Harry Potter: you can get the silhouette of Hogwarts Castle, but no-one’s going to count the square footage, or [ask] is it exactly minifigure scale? How many pupils can fit in the main hall?

“[With] Speed Champions, everyone’s like, ‘Oh, it’s not the right scale to the minifigure,’ or ‘That angle above the wheel arch isn’t right,’ or ‘That line transition isn’t right.’ So they’re very critical, which is great. I actually like that, because it really challenges us. And that’s where the fun comes from, in getting excitement from the challenge. So the design team might be like, ‘Oh, this is good enough.’ And I’ll be like, ‘Let’s give it one more loop.’”

It’s that work ethic that almost gives the Speed Champions cars a sense of being overdesigned; the number of tiny sub-assemblies, built with studs in all directions, that come together to make any one eight-studs-wide car is almost mind-boggling (and explains why the LEGO Group considers it an 18+ theme without the label).

But according to Chris, it’s also what allows the team to go beyond expectations, coming up with inspired ways to use elements and achieve what would otherwise be seemingly impossible shapes, angles and curves to replicate those real-life cars.

“The [designers] probably hate me for doing it, but we do push ourselves,” he says. “And we’re stubborn – where a lot of people would have probably given up after the third loop and said, ‘This is the best we can do,’ we’re like, ‘I know there’s a better way.’ And that’s how we get to use minifigure accessories for lights, or surfboards for spoilers.

“But I think we only overdesign because the fans have raised the bar of what they expect from us. So we’re trying to chase the level that you guys demand from us.”

You’ll be able to find out whether Chris and the team have managed to reach that level across the latest wave of Speed Champions sets from next month, when five brand new products will land on shelves. Among those are 76907 Lotus Evija, 76908 Lamborghini Countach and 76910 Aston Martin Valkyrie AMR Pro and Aston Martin Vantage GT3.