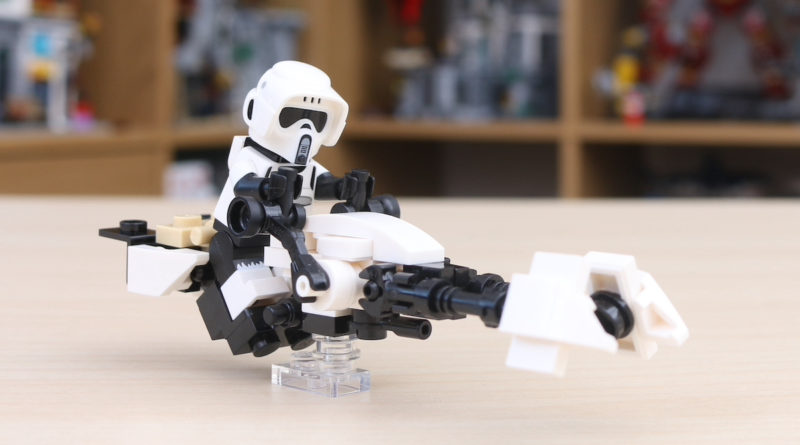 Speeder Bikes were a highlight of Return Of The Jedi, but they’re rarely celebrated by LEGO Star Wars. That may be about to change.

Flying too fast along a perilous path is a key element of Star Wars. From Luke and co barreling down the Death Star trench to mop-top Anakin Skywalker piloting a homebrew podracer, speed and inappropriate surroundings make for a great combination. Another memorable scene saw insanely fast speeder bikes being piloted though densely packed woodland on Endor which would have given any Health and Safety officer palpitations.

But while it was undoubtedly memorable, the humble speeder bike often gets overlooked by the LEGO Group.  Sure, they’ve appeared in quite a few sets, but most of the time they’re a bit of an afterthought. A small build with just a handful of pieces. Arguably one of the best representations of the bike is way back from 1999, with 7128 Speeder Bikes. In the intervening period, one of the largest versions was 75532 Scout Trooper and Speeder Bike, and that only managed 452 pieces.

But now there are rumours that we may be getting a new set, 75353 Endor Speeder Bike Chase Diorama next year.  Nothing’s confirmed yet, but if it turns out to be true, then even thought the bikes in question might be small, it’ll be great to see them finally getting the love they’ve arguably been missing for a couple of decades.

The diorama sets are popular, detailed models of iconic scenes, but they’re not cheap. Indeed, if you’re in the market for 75329 Death Star Trench Run Diorama and 75330 Dagobah Jedi Training Diorama, then now might be a good time to pick them up, as price rises are imminent. If the rumours are to be believed, then the Endor set is likely to be in the same ballpark, with €79.99 being the suggested price.

This is all speculation at the moment though, so do wait for an official announcement from the LEGO Group.

Support the work of Brick Fanatics by purchasing your LEGO via our affiliate links. Thank you.