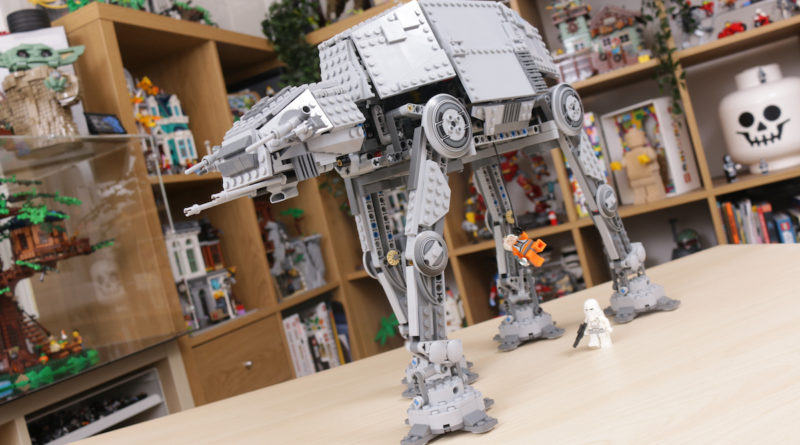 A LEGO Star Wars walker like no other, 10178 Motorized Walking AT-AT remains one of the most unique LEGO sets ever created.

10178 Motorized Walking AT-AT stands as an oddity in the LEGO Star Wars back catalogue. Well, it does more than stand, as its name suggests, and that’s what really sets it apart. Not the most popular set at the time of its release, it has often found itself outright compared to the various other AT-ATs released, and usually to its detriment.

Yet, looking back on what 10178 Motorized Walking AT-AT was as a LEGO set and what it set out to achieve, such comparisons are perhaps misplaced, and negative sentiment around the set perhaps misjudged. There wasn’t a LEGO Star Wars set like it before and, quite honestly, there has yet to be one like it since.

In setting out to bridge the gap between build and functionality like few LEGO sets before, let alone LEGO Star Wars sets, 10178 Motorized Walking AT-AT presented a unique challenge for the design team: work out everything required to make this four-legged vehicle walk in as cohesive a manner as possible, unaided by human intervention, and package it all within the framework of a skinny-legged, top-heavy vehicle that is otherwise liable to topple over at any moment.

From an engineering standpoint, it must have sounded like a nightmare of a challenge, but one that essentially the LEGO Star Wars team rose to meet. The result of their work was a 1,137-piece set with a Power Functions motor and battery pack built into the body, which drove an internal mechanism of gears and axles that would in turn ‘walk’ the model AT-AT forwards two steps at a time (one front foot and the opposite back foot), while also slightly moving the walker’s head from side to side.

From a functional point of view, while the mechanism does make for some ungainly steps here and there, it generally works very effectively. The legs are able to support the weight of the walker while still in movement, and across the build there is no strain in weight or pressure as it powers through the motions.

Beyond admiring the functionality, the novelty of having a LEGO set that can walk by itself, independent of your touch (once you activate the Power Functions inside) is never, ever going to wear off – and we say that 14 years after its release and still gleefully sending videos of its walk across our living room floor to family and friends.

It’s a transformative play experience; you can build a Hoth landscape and actually have this giant casually ambling across it, imposing and unstoppable. It’s also incredibly satisfying for any number of ways, from the subtle movements of the head as it surveys the landscape, to how the internal mechanisations force the front legs down with a particular thud.

The motorised walk captures the very essence of the AT-AT in such a way that a LEGO set should otherwise not be able to. These are gigantic, imposing walkers designed to slowly and menacingly move across any landscape before them, while the pace of their march adds to the impending and growing sense of doom and destruction that they bring. Where LEGO is generally about creative building and imagination, the application of Power Functions within 10178 Motorized Walking AT-AT takes this set to an incomparable level.

And incomparable is an important word here. As a build, 10178 Motorized Walking AT-AT is a LEGO Star Wars set in branding and packaging, but in reality is a shell of a LEGO System set over a predominantly Technic frame, so as to allow space and support in the body for the battery pack and motor, and so as to create and find space for the mechanisms needed to move the model.

It has been designed to fit function into form, and with that has had to make a few compromises in aesthetics. It means that, rather unfairly, this version of the AT-AT is often unfavourably compared to the other, non-walking AT-ATs that have come before and after it.

Indeed, in comparison with the other LEGO AT-ATs and even with the in-universe AT-AT as it appears in various Star Wars media, 10178 Motorized Walking AT-AT visually falls short, and that is unfortunately quite literally. Overall, it is generally stockier and measures shorter than all the others – 2010’s weak 8129 AT-AT Walker is close, but the rest are all at least a couple of bricks taller.

Added to that drop in height, it is also the widest and, combined with having the skinniest legs, leaves this relatively oversized gap between its legs. Altogether, it struggles to make its proportions work from an aesthetic viewpoint when in direct comparison with the other AT-ATs the LEGO Group has produced.

Those proportions also detract from a number of design elements that 10178 fundamentally improves upon 2003’s highly-celebrated 4483 AT-AT, around the bodywork plating and in the stability and angles achieved in the head design. Likewise, while the internal mechanisms of the set are visible underneath, they still resemble the underside of an AT-AT far more than a Technic-orientated design from that era should otherwise have any right to.

But as we have mentioned, comparing 10178 Motorized Walking AT-AT with sets that have been designed for display and hands-on play isn’t fair. From the other side, if we were to talk about functionality and engineering excellence, 10178 quite literally walks all over the other LEGO AT-ATs. It’s an incomparable LEGO set, across not only the other AT-ATs, but more generally across the 22 years of LEGO Star Wars so far.

10178 Motorized Walking AT-AT came out during the third full year since the LEGO Group’s transition from yellow minifigures to flesh-tone minifigures, but when face prints were similar – if not the same – to what had come before. This is most notable with the design for Luke Skywalker, as it’s the same print that was used for his yellow-tone minifigure from previous years.

It didn’t offer the best value when 7662 Trade Federation MTT registered 200 more pieces and retailed for £10 / $30 less, but with consideration to the relative cost of including Power Functions in a set and looking at the retail prices of more recent sets to have included the same motor and battery pack, 10178 Motorized Walking AT-AT offered decent value.

Adjusted after inflation to 2021 figures, 10178 Motorized Walking AT-AT would retail today in the UK for £128 and in the US for $170. Today on the secondary market, a complete version of the set can be picked up for around £150, while it is also occasionally listed on Amazon marketplace.

10178 Motorized Walking AT-AT was the result of a creative experiment by the LEGO Star Wars team, utilising Power Functions to transform a LEGO set based on an iconic Star Wars vehicle into a one-of-a-kind, independently-walking creation.

In the years that have followed and the very many LEGO Star Wars sets that have been released, nothing in the theme has so far come close to what 10178 Motorized Walking AT-AT achieved. It has issues with the finer aesthetics, but for everything it accomplishes in incredible functionality and transformative play, 10178 Motorized Walking AT-AT remains a feat of LEGO engineering.

With consideration to the library of parts and build techniques now on offer to the LEGO Star Wars team in their third decade of design, and with one eye on all the wonderful manual functions that they have built into recent sets in the theme, we can only hope that a concept like 10178 Motorized Walking AT-AT is visited once again. And if it’s kept app-free then all the better.

You can directly support the work that Brick Fanatics does by purchasing your LEGO through one of our affiliate links. Thank you!

How long does it take to build LEGO Star Wars 10178 Motorized Walking AT-AT?

This is a set from before the age of numbered bags, so 10178 Motorized Walking AT-AT certainly took a lot longer than otherwise expected. With a complicated Technic core that needs a keen eye to get right, expect to dedicate three or four hours to this.

How many pieces are in LEGO Star Wars 10178 Motorized Walking AT-AT?

10178 Motorized Walking AT-AT comes with four minifigures – Luke Skywalker, a Snowtrooper, AT-AT driver and General Veers – which are all part of a total piece count of 1,137. Just one short of the perfect number for a LEGO Star Wars set, then.

10178 Motorized Walking AT-AT is the shortest and widest LEGO AT-AT so far produced, measuring 32cm tall and 17cm wide. It is also approximately 42cm long, from the front of the head to the furthest-stretched back leg.

How much does LEGO Star Wars 10178 Motorized Walking AT-AT cost?