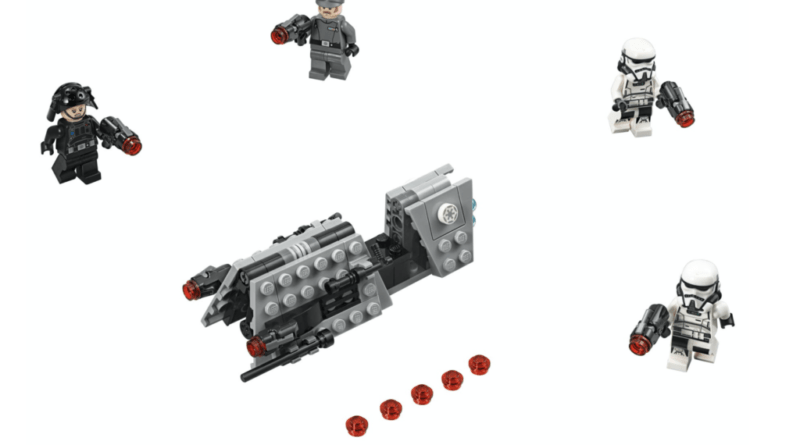 75207 Imperial Patrol Battle Pack packs a lot of punch into a small set, to make for a great little set that every LEGO Star Wars fan will likely want to pick up

It appears that Solo: A Star Wars Story is going to introduce some of the most boring professions in the Galactic Empire. They are not the conventional power-hungry officers who get to blow up planets – which is a shame. Perhaps these jobs are a bit less scary than working more directly with Darth Vader, and indeed even the might of the Empire can’t escape the dreaded task of paperwork and administration.

There are at least four new types of Stormtrooper being introduced in Solo – Range Troopers, Mudtroopers, Mimban Stormtroopers and Imperial Patrol Troopers. The lattermost is exclusive to 75207 Imperial Patrol Battle Pack. The new helmet mould looks like a mash-up between a Clone Trooper and an Imperial Stormtrooper, which helps reflect that Solo is set early in the Empire’s reign. It’s a very striking minifigure with highly detailed printing on the torso.

The ‘typical’ Imperial officer is the new Recruitment Officer and quite similar to the one seen talking to a young Han in the teaser trailer. He may be the most simple minifigure included, but is a nice addition and certainly desirable for army builders.

The Empire clearly take emigration seriously, considering the expression on the Emigration Officer’s face, and it will be interesting to see what part, if any, they will play in the film. It is also good that a female officer is included to diversify the ranks – Captain Phasma appears to have started a trend. She’s got a reversible headpiece with one side angry, and the other calm. The printing of her torso is detailed on both sides.

Indeed, such is the design on all four minifigures, the only shame is that all the Imperials come with stud-shooters rather than the standard blaster pistols. This is clearly done to improve the play options of the battle pack and make it a bit more fun.

It may be small and fiddly to build due to its unusual angles, but the speeder finishes off the set well. The newly printed round tile with the Imperial insignia should prove useful for Star Wars MOCers and refreshing for those who hate stickers. The only disappointing thing is that when placing a trooper on the speeder it’s not possible to pose them gripping the handlebars.

Similarly to 75209 Han Solo’s Landspeeder, it’s only possible to glimpse the Imperial speeder briefly in the trailer (we salute those who watch it frame-by-frame) but it is clear that the engines are red whilst this set uses blue. Meanwhile, the Patrol Trooper in the set is depicted as sitting, where his position on the speeder in the trailer is more upright. These are only minor points and at this scale are hardly noticeable.

Overall, there’s plenty of appeal to 75207 Imperial Patrol Battle Pack, particularly if you want to add some of the most obscure Imperial officers to your Star Wars collection – then this is a really neat little battle pack.