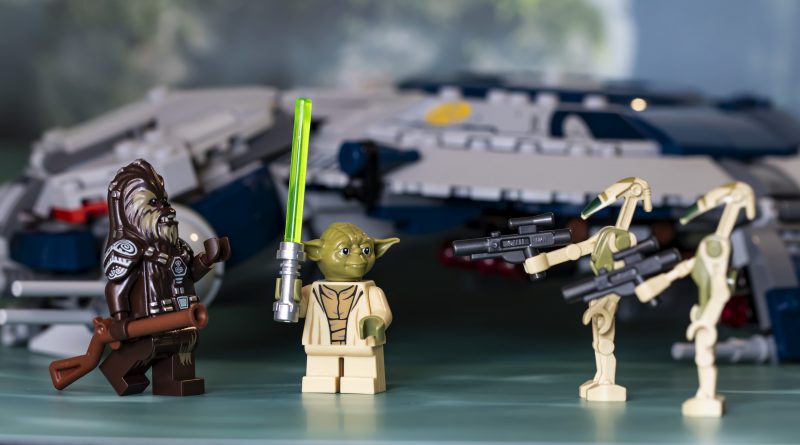 It has been five years since LEGO Star Wars fans were last offered a Droid Gunship and a lot has changed in that time. So is 75233 Droid Gunship an update worth adding to the collection?

75233 Droid Gunship is a faithful recreation of the gunship built by the Geonosis, which was first shown in Star Wars: Revenge of the Sith. Presented in a dark blue and light blue grey colour scheme, it features an impressive array of weaponry including two joint-mounted cannons at the front, four dual flick missiles underneath the hull and two wing-mounted stud shooters. The set also includes four minifigures –Yoda, two Kashyyyk Battle Droids (new this year) and Chief Tarfful, who is exclusive to this set. 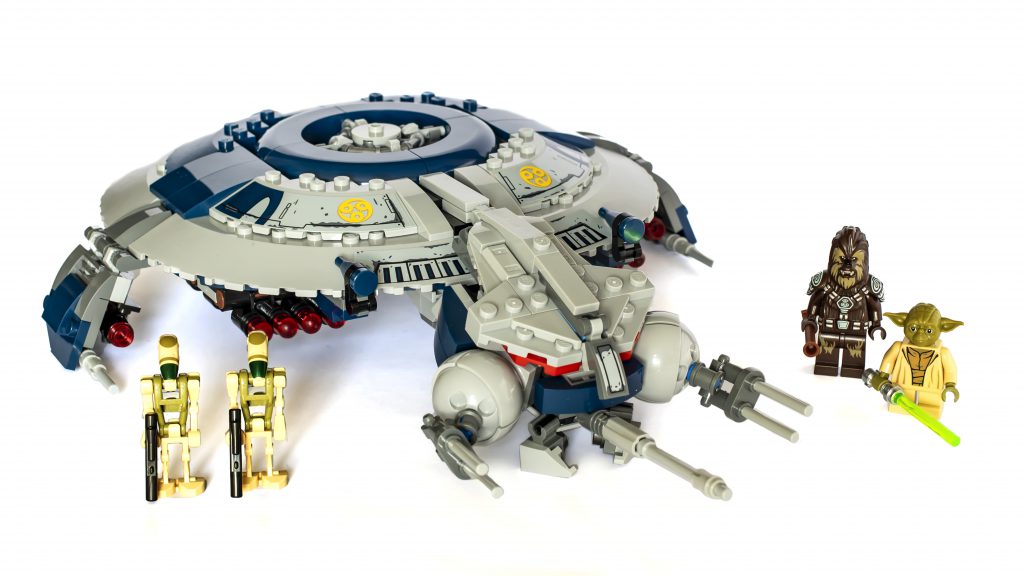 Yoda is dressed in Jedi robes, appropriately for this era of the Star Wars saga. His rubber head piece is not new but still an excellent mould with fantastic detailing of his wrinkles. Chief Tarfful is slightly updated from the 2014 variant and still looks wonderful. His mould is excellently done and his dreadlocked hair and metal connectors are a real stand out.

Before delving into the pros and cons of 75233 Droid Gunship, it is first worth drawing comparisons with the older 75042 Droid Gunship. Both measure up at the same size, 29cm, but the newer set has replaced the bomb dropping play feature with the aforementioned dual flick missiles. It’s a smart move as not only are the flick missiles more accurate to the on screen Droid Gunship, but they can be launched one by one or unleashed in one go to rain down a barrage of destruction onto the Republic Army. As a play feature it’s great fun.

The colour scheme has been updated too. The light blueish grey and dark blue is an improvement on previous models. The build itself uses similar parts and techniques as before but the addition of newer parts, such as the dark blue ice cream cones (making a first appearance in this colour) help to add more detail than has been possible in the past.

The first stages of the build use large parts and simple assemblies and is quite unsatisfying to construct. It’s not until bag three when the build experience starts to vastly improve. There’s a number of sub assemblies, which are both enjoyable to put together and contain some nice techniques.

The front canopy, cockpit area and gun turrets are also very well designed, with the gunship’s reactor core vents in the middle of the fuselage a particular highlight. A clever use of a parabolic ring coupled with some clips sits atop the vessel adding great detail and a wonderful looking finish to the model.

The detailing and shaping of 75233 Droid Gunship is excellent and certainly makes for a great representation of the source material. The play features are enjoyable to use and include the stud shooter, dual flick missiles, rotating gun turrets, a storage compartment for a Battle Droid and retractable landing gear. The finished model is a little on the slim side, from certain angles it doesn’t look great, but when viewed from the top or the front it certainly looks like a menacing spaceship.

As an update it certainly ticks a lot of boxes and fans of the Clone Wars era will no doubt love the improvements made on its predecessor, but the £54.99 price tag and simplistic build might be enough to put off the more casual LEGO Star Wars fan.

75233 Droid Gunship is available now at shop.lego.com. You can help support Brick Fanatics’ work by using our affiliate links.