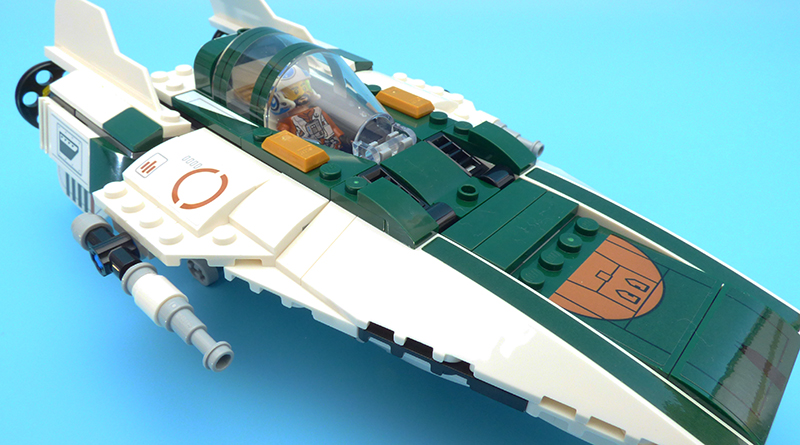 Star Wars: The Rise of Skywalker will see another classic ship in battle once again, presented in the LEGO theme as 75248 Resistance A-wing Starfighter

Like the X-wing Starfighter and the TIE Fighter though, the recognisable Rebel ship is returning in Star Wars: The Rise of Skywalker, with this LEGO edition based on a green and white rendition of the fighter. ‘Snap’ Wexley, the Resistance pilot who last appeared in The Force Awakens, is included, as is Lieutenant Connix, who will have appeared as part of the Resistance crew in all three sequel films.

One of the immediately notable things about this LEGO Star Wars set is that the vehicle has not changed much in between the two trilogies – there are immediately identifiable differences when it comes to the X-wing, but in the case of the A-wing, the changes are much more subtle. Are they down to the movie design being different or are they just indicative that each time a ship gets a new LEGO version, it is a little different? Only the release of the film will reveal that.

The main body of the ship is built first, with surprisingly little SNOT (studs not on top) technique for a modern LEGO set. Once the layered centre is complete, the two angled sections are built one by one and attached at the back. It is a pacey, straightforward build without surprises, but with a solid, swooshable starfighter at the end of it.

Landing gear features at the bottom of the ship, so it is elevated off a surface by a couple of centimetres, which makes it good for display. Like nearly everything about this model, it is a familiar feature for those who have built 75175 A-wing Starfighter or 75150 Vader’s TIE Advanced vs. A-wing Starfighter.

The similarities are not necessarily a bad thing, as the past few A-wing have been successful and there is no sense in disrupting a formula that works. One drawback that this version shares with its predecessors though is that the cockpit is a little on the large side to accommodate the minifigure, but without making the ship larger – which would make it look odd alongside an X-wing or Y-wing – it is hard to see how this can be solved. It is a small compromise that the LEGO design team has made.

Aside from that, everything about this model works – it looks almost identical to an A-wing and a minifigure can be popped in and out of it. What more is a ship like this required to do? For those who need it to fire missiles, it does, with the buttons that trigger them suitably discrete.

The minifigures are no doubt a draw for Star Wars sequel trilogy completists but are not the most recognisable characters for the average viewer. Both are named characters who have a couple of lines but are not particularly memorable. ‘Snap’ Wexley has great printing on his loose-looking pilot’s uniform and Lieutenant Connix features a plain but decent military style jacket.

While this set is a nice model to hold in a hand and swoosh around, the larger sets inspired by Star Wars: The Rise of Skywalker, such as 75255 Yoda (review) and 75256 Kylo Ren’s Shuttle (review) are where the real satisfaction is to be found. For a smaller build though, those who haven’t picked up an A-wing in a while are likely to enjoy 75248 Resistance A-wing Starfighter.

75248 Resistance A-wing Starfighter is available now at LEGO.com. You can help support Brick Fanatics’ work by using our affiliate links.