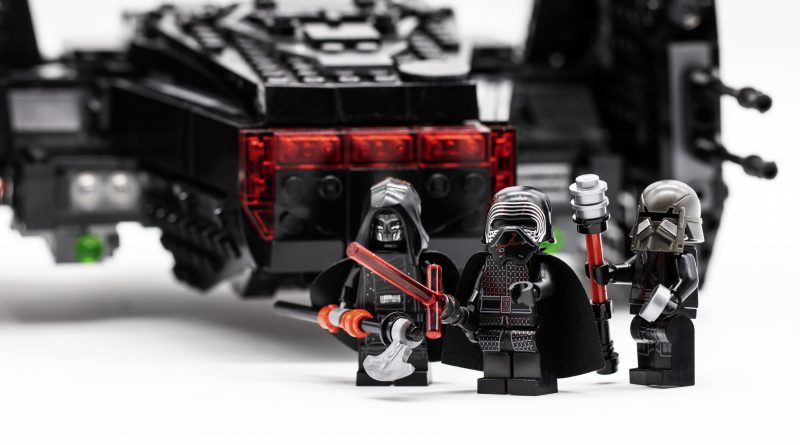 LEGO Star Wars 75256 Kylo Ren’s Shuttle sneaks over the 1,000 piece mark, with that decent number of parts forming an impressively sized Upsilon-class Command Shuttle, in the Star Wars universe parlance. Based on its appearance in Star Wars: The Rise of Skywalker, the set stands at just over 40cm tall with the wings fully deployed. Six minifigures are also included within the box – Supreme Leader Kylo Ren with patched up helmet, two mysterious Knights of Ren, General Pryde, a Sith Trooper and a regular First Order Stormtrooper. 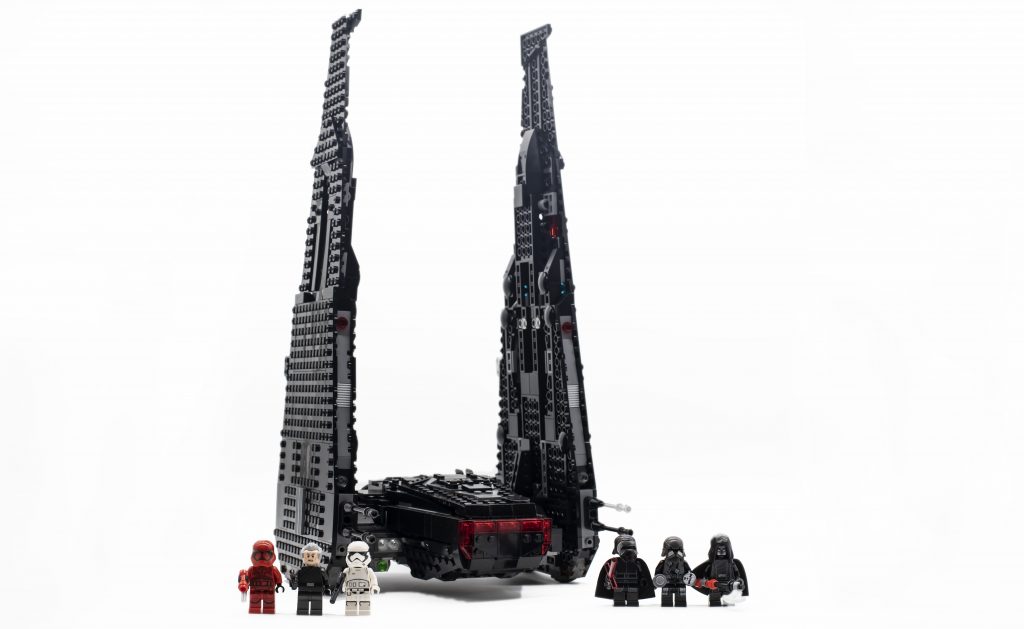 Right from the moment his ship dramatically lands on Jakku in The Force Awakens, Kylo Ren’s Command Shuttle proved an imposing looking vessel. In 2015, the LEGO design team had limited resources to base the previous model, 75104, upon and sadly it showed as several key features were missing. Now, with two films’ worth of source material to work plus presumably some concept artwork for a third, how has the design improved?

The first thing to take note of is the new colour scheme. This time, the ship is depicted in ominous black, which is far more accurate than the dark bluish grey of its predecessor. The overall detailing of the shuttle has improved too, with the designers taking advantage of some newer pieces that weren’t available back in 2015. The 1×1 round plate with bar holder, 1×1 round plate with 1l bar and the black minifigure ice skates, new for 2019, are a few examples of the elements used for greebling.

As for the two biggest overhauls, they come in the shape of the command module, now a smaller but far sleeker design (even if the capacity to house minifigures has dropped from five to three) and the wings that fold out to form the iconic ‘V’ shape when in flight mode – this is something that was completely lacking from the original model. The wings are connected to two hidden Technic beams and when the shuttle is lifted they automatically fold out. It is a fantastic function, adding both to the play value and the overall look of the finished model. The wings can be placed back into an upright position with a simple twist of one of the rear engines. As a comparison to the original 75104 Kylo Ren’s Command Shuttle this update is a vast improvement, although in and of itself it is an impressive aspect to the model.

The use of the trans-red pieces in 75256 Kylo Ren’s Shuttle to simulate the cockpit’s window is a nice touch, adding more accuracy to the overall look. The command module may be smaller in size than before but it certainly looks more in proportion with the rest of the model this time around.

Once again each wing folds down, mimicking the landing stages of Kylo’s on screen shuttle. It is not completely accurate, as in the film the wings slide down rather than fold in on themselves, but this is a nice compromise and is an incredibly satisfying function to operate.

Of the six included minifigures, all except the First Order Stormtrooper are exclusive. Kylo Ren gets his first minifigure variant as Supreme Leader. His new helmet looks excellent, complete with red repair marks and beneath it he features double sided facial prints, one mildly annoyed and one downright furious.

Fans can finally get their hands on the infamous and enigmatic Knights of Ren in this set. One is a hooded Sith looking character wielding an axe, while the other is an armoured heavy weapons expert with a staff and thermal detonators. Although it is impossible to talk about accuracy at this stage, both have exceptionally good printing across the torso and legs – they are cool minifigures in their own right.

With every new Star Wars movie comes a new Stormtrooper and this year it is the highly desirable Sith Trooper. The Sith Trooper uses the same helmet piece as a standard First Order Stormtrooper but has an intimidating black and red colour scheme. The First Order Trooper is the same one that collectors will already have a small army of.

The last two minifigures are a little less interesting. General Pryde has simple gunmetal printed robes and plain legs. Does he look like Richard E Grant, the actor playing him on screen? No. Does he look like Grand Moff Tarkin in a bathrobe? Yes.

This set is a fantastic upgrade from the previous model with pretty much every area being improved upon – anyone who skipped it last time would do well to buy this edition. The model looks brilliant from all angles and the new colour scheme is not only accurate but incredibly menacing, looking really stirking when placed on a shelf. The minifigures are some of the most desirable from this current wave and should be on every collector’s ‘must have’ lists. While 75257 Millennium Falcon may offer a better balance of interior and exterior, this is pretty accurate to the source material and those who are yet to buy a set from Star Wars: The Rise of Skywalker… well, 75256 Kylo Ren’s Shuttle really should be your First Order.