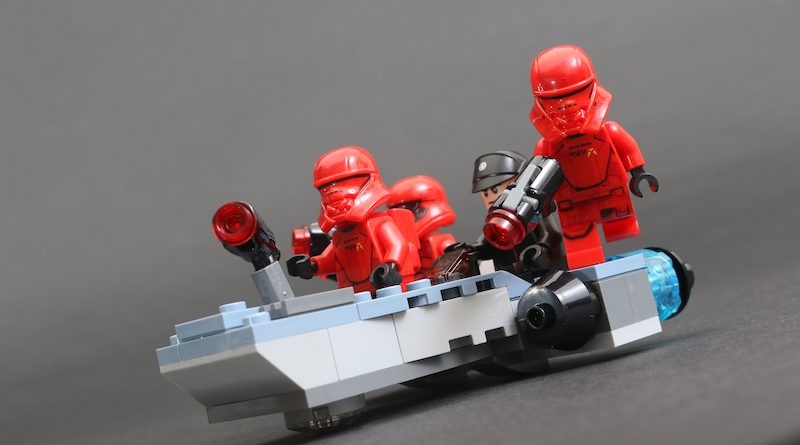 Who are the Sith Troopers? Why are they red? Who will they be fighting? And who will be commanding them? Questions many Star Wars fans will have heading into The Rise of Skywalker, but all irrelevant at this stage in assessing 75266 Sith Troopers Battle Pack. That’s because, for just how striking, different and detailed these minifigures are, they make up a set that is a sure-fire addition to any LEGO Star Wars collection.

One Sith Trooper, previously exclusive to the high-cost 75256 Kylo Ren’s Shuttle (review), is included, alongside a Sith Officer and two Sith Jet Troopers, who are recolours of the First Order Jet Trooper included in 75250 Pasaana Speeder Chase (review), with extra fine detailing in their helmet and torso prints, and the same legs as the Sith Trooper.

The four minifigures complement each other nicely and truly take the sequel trilogy era of LEGO Star Wars minifigures into an interesting and refreshing direction. Whatever the significance and role of the Sith Troopers and Sith Jet Troopers in The Rise of Skywalker, these minifigures look great and bring renewed intrigue into the otherwise overly familiar group of bumbling First Order antagonists.

Their respective designs are incredibly detailed, with some of the finest, smallest lines printed on a minifigure perhaps ever. Whilst the Jet Troopers and Officer are essentially recolours and the Officer does have that overused Lex Luthor face print, their respective unique printing helps to clearly differentiate them – the Officer’s hat even has a new logo, separate to the First Order.

One creative freedom often afforded to battle packs and most likely in part due to the limited number of pieces that can be included, is in that they are not tied to necessarily recreating particular vehicles from the source material.

In some cases they still do, such as with 75207 Imperial Patrol Battle Pack, from Solo, but in others, perhaps as is the case with 75266 Sith Troopers Battle Pack, they do not. And, in that freedom to create something Star Wars-esque without being specifically anything at all, there are some great little builds that can be created, with the speeder in 75266 no exception. Most pleasing is its ability to seat three of the included minifigures, even at such a small size, which combined with the general fun factor sees this build compare very favourably to some of the best out there, such as the soon-to-be-classic 75166 First Order Transport Speeder.

There’s not much known about the Sith Troopers at this stage, but there’s plenty to love about 75266 Sith Troopers Battle Pack. If they prove interesting, dynamic characters in The Rise of Skywalker, then this could be a classic LEGO Star Wars set.

75266 Sith Troopers Battle Pack is available from December 26 in the UK at LEGO.com. You can help support Brick Fanatics’ work by using our affiliate links.