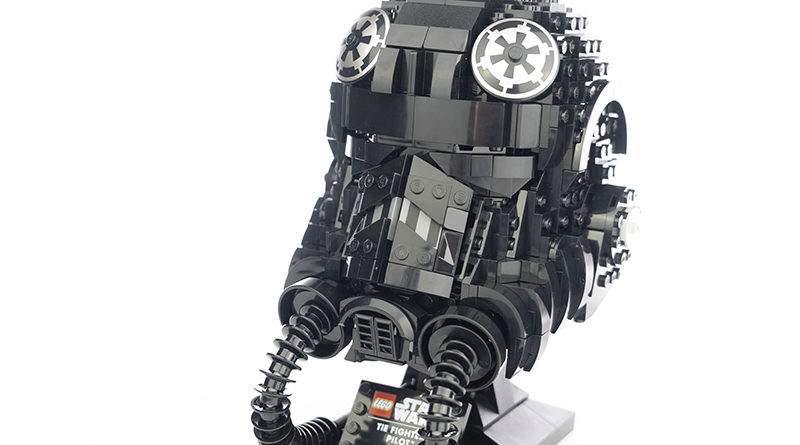 Launched this year, the new Buildable Model Helmet Series presents some of the most iconic designs in the Star Wars saga and captures them using LEGO elements. Up until now, the LEGO Star Wars theme has only regularly released vehicles as display models, interspersed with occasional character sculptures, so it is genuinely new subject matter.

Of the three launch sets – 75276 Stormtrooper Helmet, 75277 Boba Fett Helmet and 75274 TIE Fighter Pilot Helmet – the Imperial pilot seems the one that the designers might have struggled with the most when recreating the film prop in LEGO form. It’s entirely one colour, includes many angles and has the breather tubes to complicate matters.

While designing 75274 TIE Fighter Pilot Helmet must have been challenging, building it is straightforward. Fans who have put together 75255 Yoda (review) will be familiar with the basic structure – inside the helmet is a square frame built using Technic elements, with pins leaving studs exposed that the sections can later be attached to.

The stand is pretty self-explanatory and not overcomplicated, using sloped elements for a clean, sleek look. Once the stand and frame are built, sections of helmet are built and attached. Particularly on the sides of the model, different sections slot together impressively like jigsaw pieces. It really is a testament to the LEGO design team’s ingenuity that models like this are to easy to build. While coming up with the set is impressive, the ability to communicate how to replicate deserves recognition too.

Those side sections of the helmet take a very traditional LEGO approach, layering plates at the right gradients so that they create a nice, gradual, curved appearance. Thanks to the studs that are visible, the finished build retains its LEGO charm and cannot be mistaken for a product from any other Star Wars licensee.

On the actual movie prop, there is a section running across the helmet’s centre and down the back that is raised from the rest, depicted here with slope elements. The contrast between the smooth surface with the studs captures this aspect of the helmet well.

While the breathing tubes may seem like a tricky thing to create in LEGO, two flexible tube elements that are then covered in round pieces manage to achieve the desired look with a minimum of fuss.

Something that this set demonstrates is that not everything needs to be over-engineered. The ‘mouth’ section of the helmet, that sits at the bottom centre, is simply constructed with a few tiles and plates, before being attached to the main build with a single hinge piece. This allows it to sit at the correct angle, but it falls slightly short as it is too narrow and a little too high when compared to the source material.

Another place where the sizes seem a little off is towards the top of the head, where the printed dishes with Imperial insignia seem a smidgen too large. Admittedly it can be hard to determine these things as the angles the costume is shot from in the films can be misleading.

Despite some slight fudging on the proportions, this is instantly recognisable as the TIE Fighter Pilot helmet and will not be mistake for anything from Gentle Giant or any other company. It balances being a beautiful Star Wars display piece with being a LEGO model and at this scale it is hard to ask for much more than what it achieves. LEGO Star Wars fans keen to try out this new expression are unlikely to be disappointed by 75274 TIE Fighter Pilot Helmet.