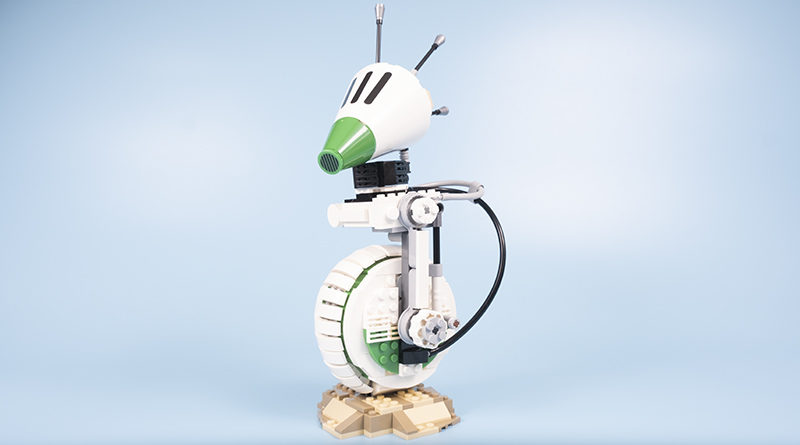 75278 D-O gives the new droid from Star Wars: The Rise of Skywalker the LEGO statue treatment and packs it with personality.

Some very iconic and important Star Wars characters have been released as stand-alone LEGO sets over the years – Darth Maul, Yoda, General Grievous and R2-D2 – but more recently, new characters and creatures have been given the treatment as they are introduced, as was the case with 75230 Porg and 75278 D-O.

That means that some characters are given these big sculpture sets despite only having a small role in the movies. D-O is a new character in Star Wars: The Rise of Skywalker, who turned out not to be terribly consequential. The droid was owned by an assassin named Ochi, and when discovered by Rey and her friends joined them on their journey. In a prior version of the story, the mechanical being was built by Babu Frik.

One thing that is worth making is that 75278 D-O does not feature a turning wheel. Given that the film character’s signature move is wheeling around, that’s a real shame. With that acknowledged, the LEGO droid is very much a statue rather than having significant interactivity once built.

The construction is surprisingly simple given the shape of D-O. Two long flexi tube pieces have 1×2 bricks with Technic holes slotted over them, with the 1×4 slopes attached in order to replicate the way the wheel looks on-screen. Two green and white patterned sections are then attached using SNOT bricks to cover up the inside of the wheel and match the film design.

Two lovely functions are built into the ‘arm’ that connects the wheel and the head. Turning the bottom wheel makes the head platform tilts backwards and forwards. Turning the top wheel turns the heads back and forth. It would have been preferable to have a turning wheel instead of these functions, but it’s better than nothing.

It is in the arm that the cleverness of this model becomes apparent – the base is vital for the build’s stability, with the wheel connected to it using Technic beams. Then the head and neck section is only connected to the wheel via the ‘arm’ that links them, which must have taken a lot of trial and error for the LEGO designers to balance correctly so that it stays upright with no tilting at all.

Thankfully the head elements are printed, so there is no need to carefully align stickers in order to give D-O his personality. The head comes together using very few pieces, which gives the model a nice, smooth finish.

While the head and body are in proportion correctly, the ‘neck’ on the LEGO set is a bit too tall and bulky. Fans might forgive this as a limitation that comes with the LEGO building system, but when the design team is managing to match what is seen on-screen more than ever before, it is less forgivable when the mark is missed. The boxy section above the wheel should be smaller than it is on the model. The somewhat oversized section should be given credit for accuracy though.

When complete, D-O is undoubtably a satisfying display model. It is one of those sets that, at a glance, is not immediately apparent that it is made of LEGO elements. The character is perhaps not iconic enough to be a must-have in the same way that some of the new buildable helmets are, but those who love the design will be happy with the model.

As well as the large, buildable statue, the mini D-O element that has appeared in other LEGO Star Wars is also included. There is space for it to sit on the buildable black stand that can sit alongside the statue.

For the LEGO Star Wars theme, the price is probably about what collectors will expect – but that’s about 10-15% more than it should be. If this was that little bit cheaper, it would feel like a much more comfortable purchase.

When fans see a new X-wing Starfighter or TIE Fighter, they have to debate whether to buy it, or wait for the next version. Will it feature an improved design? Will it include a more desirable minifigure? In the case of D-O though, it’s highly unlikely that this character will be revisited in this way. It isn’t a perfect model, but it’s close enough to how the droid looks on-screen to satisfy fans of D-O and Star Wars: The Rise of Skywalker.

75278 D-O is available now at at LEGO.com. You can help support Brick Fanatics’ work by using our affiliate links.