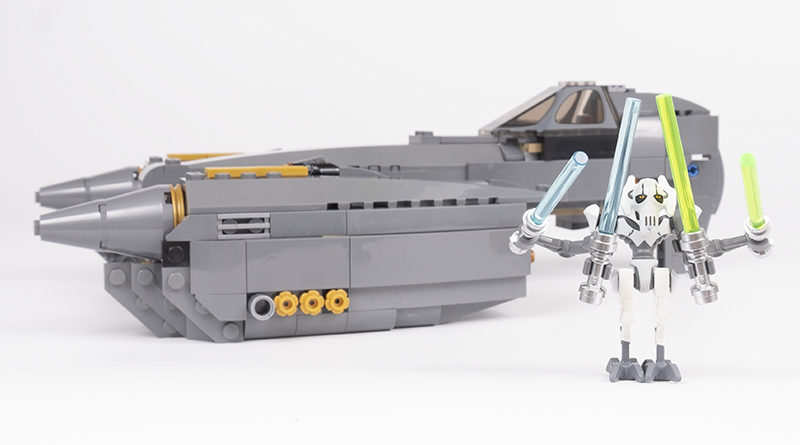 75286 General Grievous’s Starfighter offers a minor vehicle at a nice scale, but does its price go beyond what even LEGO Star Wars collectors are prepared to pay?

Star Wars does many things right, one of which is creating compelling villains. While he’s no Emperor or Darth Vader, General Grievous is still a wonderfully evil character with his distinctive hacking cough and creepy movements. In Revenge of the Sith, he meets his demise in a battle with Obi-Wan Kenobi on a landing platform alongside his personal starfighter. It’s important later, as the resourceful Jedi uses the ship to make a stealthy getaway when his Clone Troopers turn on him.

Grievous’s Starfighter hasn’t been released as a LEGO set since 2010, so it’s probably about time that new collectors have an opportunity to own this prequel era vehicle. When it last appeared as 8095 General Grievous’ Starfighter it was based on the Clone Wars animated series, so this is the first movie-inspired version since 7656 General Grievous Starfighter in 2007.

It’s not usually worth going into the process of tipping the bags out of the box when reviewing a LEGO set, because there’s not a lot to tell. In this case though, when tipping those bags out, you’ll be forgiven for wondering where the rest of the bricks are. Just three pretty thin bags fall out of the 75286 General Grievous’s Starfighter box.

Expectations continue to be thwarted when tipping that first bag out and searching for Technic elements. Like night follows day, Star Wars starfighters start with Technic frames – but not here. It’s a very traditional LEGO experience, layering plates and making minimal use of Technic pins and axles. That’s not necessarily a bad thing, but it is a surprising thing.

While it doesn‘t compromise the sturdiness of the finished model, which is perfectly swooshable, it does mean the building takes very little time. Even at a leisurely pace, you’ll find those bricks disappearing from the tabletop worryingly quickly. A build taking a long time isn’t necessarily a sign of it being good, but when paying £74.99 / $79.99 there’s an expectation that it will give you a few hours of satisfying LEGO clicking and snapping. You won’t get that here.

The build doesn’t slow down – it really is amazing how little time it takes to put this together – with the central section built first, followed by the engines on either side. Plenty of sideways building gives it a smooth, polished finish with studs showing where additional texture is needed.

It seems that the designer of the set is a fan of the sliding piece, as the 1×4 element appears a few times during the build. It works perfectly for Grievous’s cockpit, giving a satisfying and movie-accurate sliding motion so the villain (or Obi-Wan) can be popped in and out. It is used to slightly stranger effect on the sides of the engines.

Some sets offer storage options for the accessories contained within, which are almost always welcome. In the case of this model, great effort goes into building hidden sliding compartments – that really are seamless – so that the lightsabers can be stored without impacting on the set’s aesthetics. What is so strange about it though is how much trouble goes into providing a spot for the sabers, when the set has no other interesting functions. It almost seems like the feature was added just to add a little complication to the build.

Despite all of these gripes, this does provide the LEGO Group’s best version of this starfighter yet. It captures the profile of the ship better than 2010’s 8095 General Grievous’ Starfighter and the colour scheme is also a big improvement over that edition. Tiles work a lot better than studs for this model, capturing the sleekness of the ship.

The only drawback when it comes to accuracy is the use of cone elements at the front, which still don’t really replicate the shape of the digital model and are definitely the area that needs improvement.

The minifigure that stands out in the set is the Airborne Clone Trooper. No-one should tell him he’s missing his jetpack, just in case it’s a Buzz Lightyear scenario. Other than that omitted accessory, this is minifigure perfection. With detailed printing that retains the LEGO style, tiny little scuff marks go from the legs, up the torso and right the way to the helmet. The one complaint is that the set would have welcomed a couple more of these Clones – especially since this battalion hasn’t shown up since 2013, making army building a challenge.

Grievous is back, and he’s just as you remember. This excellent specialised figure continues to impress, despite having been around for a decade now. The specific variant included here was introduced in 2014 in a much cheaper set, but for those who don’t yet have him in the collection, it seems appropriate to get him with his starfighter.

General Kenobi is included to say hello and it’s the same edition as in 75269 Duel on Mustafar. It works well in this set, as by the end of his epic pursuit of General Grievous, Obi-Wan is looking a bit worse for wear. Those rips on his tunic are very appropriate. It also means that fans can recreate the Revenge of the Sith scene that sees the Jedi ‘borrow’ the starfighter to escape Utapau.

Some Star Wars ship designs are beloved because they get a decent amount of screen time and look ridiculously cool. The X-wing and Millennium Falcon are two ships that definitely fall under that category. Some get less time on screen, but are distinctive and memorable, so take hold in the imaginations of fans. Slave I and the Rebel Blockade Runner are good examples of those.

Others, though – like General Grievous’s Starfighter – are barely on screen, and are not awesome enough to earn a fan following. While the Separatist leader’s starfighter is neat enough and definitely fits the Star Wars aesthetic, it lacks that special something to elevate it above the many decent designs from the galaxy far, far away.

Given that we’re 21 years into the LEGO Star Wars theme, that by no means disqualifies it from being a desirable set. Fans who have been collecting for years need these less visible vehicles to keep their interest and give them something fresh to buy. What is debatable though is whether these minor starfighters should ever be £74.99 / $79.99 releases.

It seems that the LEGO Group has spotted the problem of increasing price, with the new smaller X-wing, TIE Fighter and Imperial Shuttle coming in 2021, but it’s actually vehicles like this that need that treatment rather than the saga’s signature vehicles. It’s a lot easier to justify paying this price for those important ships than it is for this one. The LEGO Group knew this back in 2007, when the set used 232 pieces and retailed for £19.99 / $19.99. It wasn’t as detailed as this version, but it was movie-accurate enough and did the job.

Despite all of that, given that the General’s vessel hasn’t been available for a decade – and it may be another decade until it returns – no-one at Brick Fanatics will judge you for sucking it up and paying the ludicrous price for these 487 pieces.

There’s no getting around the fact that this set is overpriced. What should give you pause for thought is how infrequently the vehicle comes around – this isn’t a Snowspeeder. It’s only the third minifigure edition of the ship, and with so many new Star Wars streaming shows on the way, who knows how much love the core six movies will get going forward? Fans who don’t yet own Grievous’s personal fighter or those who want the biggest and best version of every vehicle will probably want to begrudgingly channel the General and cough up for this one. Just hold out for a double VIP points weekend…

75286 General Grievous’s Starfighter is available now at LEGO.com. You can help support Brick Fanatics’ work by using our affiliate links. 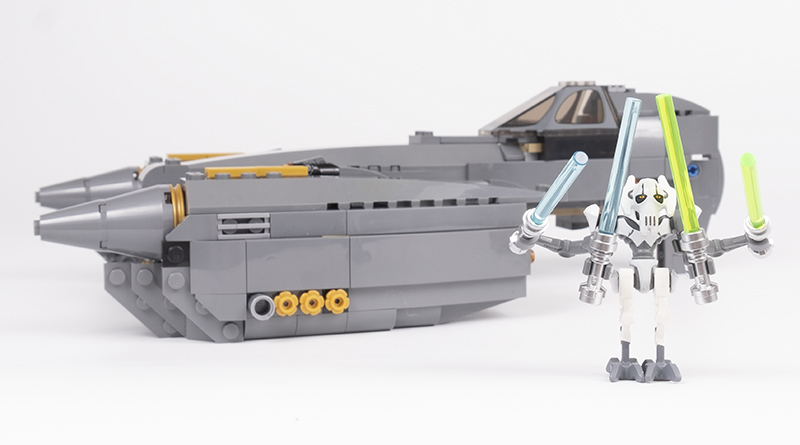